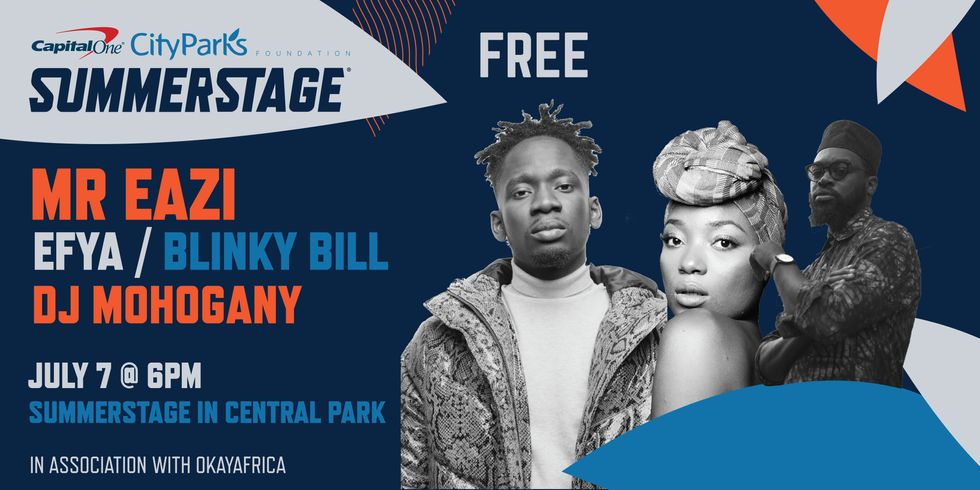 join us for this must-see show featuring Efya, Blinky Bill and DJ Mohogany.

Mr Eazi describes his laid-back bops as his pioneering Banku music—named after the heavy Ghanian comfort food—and while the Afropop artist makes soundtracks for good times, he also represents the cultural exchange between African neighbors Nigeria and Ghana.

Born in the former and educated in the latter, the recent Mad Decent signee often touches on themes of migration, and can be seen on the cover of his 2017 mixtape Life Is Eazi, Vol. 1 – Accra To Lagos in a suit tailored in the fashion of a Ghana Must Go bag, a symbol of the link between the two countries.

The show will also feature the stylings of Blinky Bill Sellanga, the Red Bull Music Academy alumnus and Kenyan frontman for the house/funk/disco group Just a Band, with support from DJ Mohogany, a Brooklyn-bred DJ currently spinning unpredictable genre-defying sets in Europe.

In Association with OkayAfrica

After the show join us for 'The Afters: SummerStage Edition - Featuring Guilty Beatz and Blinky Bill'at 5th & Mad.

RSVP FOR 'THE AFTERS' HERE