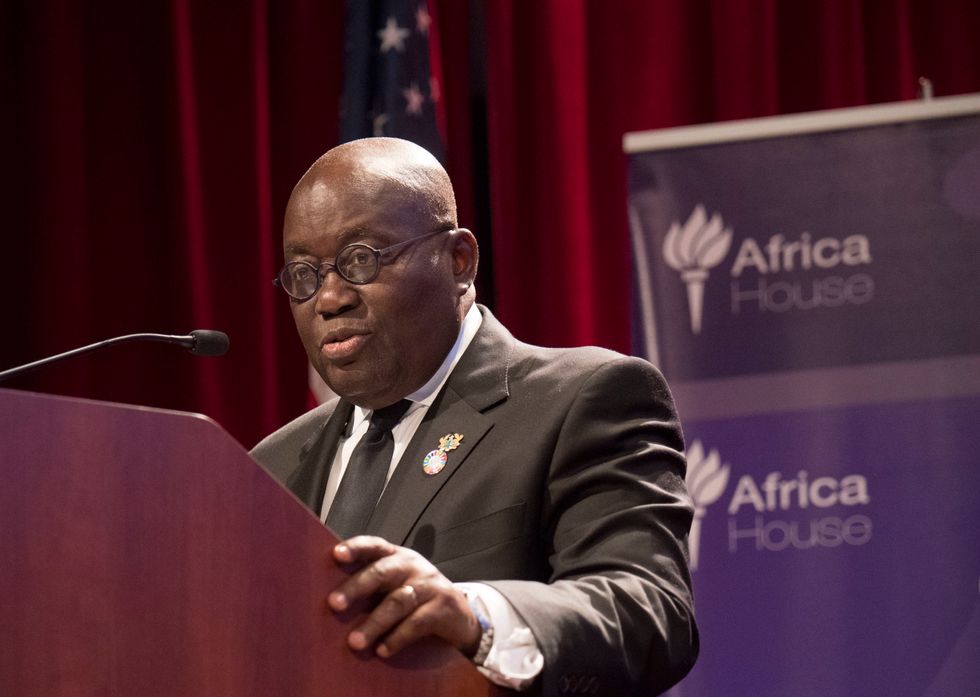 Ghana's President Nana Akufo-Addo visited with compatriots at NYU's Africa House for a town hall, here are our takeaways from the event.

NEW YORK CITY—It was like waiting for an African wedding reception to start.

What was supposed to be an engaging dialogue and conversation, turned into a waiting game. Akufo-Addo almost didn't make it, arriving with only less than 30 minutes until the town hall was supposed to end. In other words, he was well over 2 hours late. The crowd that filled Eisner & Lubin Auditorium (the overflow room next door was full, too), grew weary and rightfully frustrated when the only updates received from the organizers were "He'll be here very soon."

While it was a missed opportunity for Akufo-Addo to truly exchange and speak with his compatriots, he made sure to update attendees of the work his new government has put in since he took office in February of this year.

Take a look at our three takeaways from his speech, which highlight on efforts for Ghanaian youth and fighting corruption.

Improving Ghana's agriculture industry is a priority, especially employing recent graduates in the field to the public sector.

Akufo-Addo announced his new initiative, "Planting for Food and Jobs" to redevelop Ghana's agriculture—which plays a crucial role in the country's economy.

"We have identified 200,000 farmers for the pilot program," he says, "where we will furnish them with improved seedlings to grow maize, yam, cassava and will reduce price of fertilizer to our farmers by 50 percent."

His government also plans to implement a plan putting over 3,000 recent graduates in agriculture to the public sector where, according to Akufo-Addo, not a single student were given job opportunities in their field for the past five years.

"We’ve began the employment of these young men and women as extension officers, and this year’s budget has provided the employment to 1,200 of them," Akufo-Addo says, "with the commitment that every year from now on we will employ at least 1,500 to 2,000. As extension officers, these young men and women help our farmers adopt official and improved methods."

Education is a high priority for Ghana's president—for him broadening access to quality education is a promise he made to his people that he plans on keeping.

"It’s not that there’s a lack of inability, it’s a lack of money," he says. "Poor parents have not had the opportunity to keep their children enrolled in school, which is a major loss for the development for our country."

For Akufo-Addo, transparent government is key for Ghana to have a bright future.

Akufo-Addo plans on looking to the members of Ghana's parliament to support his efforts to transition Ghana to a transparent government to continue fighting corruption.

"We will establish an office of special prosecutor," he says. "The prosecutor will be chosen in a transparent manner, protected by statute and independent of the executive; who will make the decisions about investigating as well as prosecuting offenses of corruption."

He also plans to make history by making the assets of ministers available to the public for viewing.

"For the first time, all ministers of the government, including myself, have declared and filed their assets with the auditor general," Akufo-Addo says. "We are in the process of asking parliament to vote on the asset declaration to see if there is support for the idea of open declaration of assets, not only to file, but to publish."