Why are Nigeria’s Super Falcons Earning Significantly Less Than Their Male Counterparts? 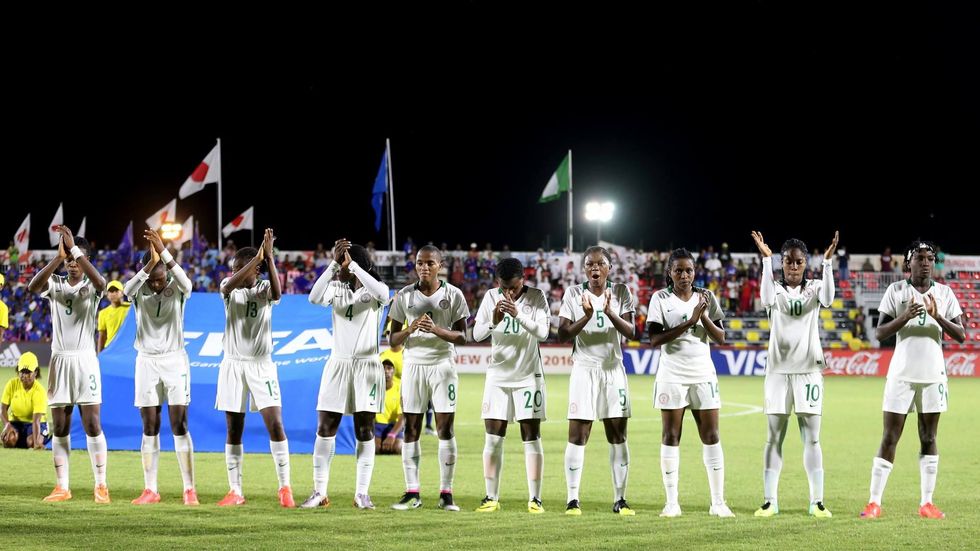 Nigeria's national team, the Super Falcons are favorites in the 2016 Africa Women Cup of Nations in Cameroon but are dogged at home by low pay and sexist attitudes.

It’s the opening minute of the second half and Nigeria’s Super Falcons are facing their Senegalese rivals one last time to qualify for the Africa Women’s Cup of Nations. They are in the lead with 1-0, but set on leaving nothing to chance, the ball crisscrosses to the Senegalese end, midfielder Asisat Oshoala passes it, the Senegalese goalkeeper stumbles and Oshoala’s teammate, Osarenoma Igbinovia, takes advantage and scores!

With that 2-0 victory in April, Nigeria’s national team sealed their place to compete at the continental tournament, beginning in Cameroon this month. But their triumph was marred by reports that the Nigeria Football Federation compensated them for the win with ameasly $50 each. In contrast, their male counterparts, the Super Eagles—who failed to qualify for the men’s tournament—were reported to earn $4,000 each for a draw and $5,000 for a win.

It seemed an anticlimactic end to brilliant sportswomanship and Nigerians took to chatrooms to say as much. “Na to quit playing for Nigeria if na me,” one commenter wrote onNairaland. “We should be thanking God it was in cash not in bounced cheque,” another quipped. And yet another added poignantly: “It’s a man’s world afterall.”

Nigerian national team players are not salaried employees of the NFF per se. Payments to athletes are dispensed on a match-by-match basis primarily in two forms: camp allowances and match bonuses. So while the Super Falcons are camped at Abuja to train for their upcoming match against Mali on the 20th, they receive a daily stipend.

There is no money in the federation to even pay Super Eagles’ players, let alone the Super Falcons players
According to former Super Falcons midfielder Mercy Akide-Udoh, the daily stipend is the $50 from the news reports. “Payments are made once the competition ends,” she said. And the Falcons are then given the lump sum before they leave camp. Even with the $50 allowance being considered against the number of days spent at camp, a disparity prevails.

“Their money is always more than us,” Akide-Udoh said about the Eagles during a phone interview. She hasn’t played for the Falcons since 2005. “They might play one game and the [NFF] might say $10,000 for one game.

“They always say that the guys are playing in Europe; so they play professional soccer in Europe.”

Historically, the Falcons have also had foreign-based players. Akide-Udoh was the first African footballer to be drafted to a U.S. league; and current Falcons coach Florence Omagbemi was recruited to the San Diego Spirit in her heyday. Yet their overseas status was not enough to persuade the NFF to raise its pay for the Falcons long before Nigeria’s current recession hit.

Akide-Udoh joined the Falcons at 17. She was the first person to win the African Women Footballer of the Year in 2001. She admits some things have improved for the women of Nigerian football. When Akide-Udoh started playing for the Falcons in 1995, their daily allowance was N500 and they wore the oversized jerseys for the men’s team. The pay was increased to $50 (now N15,250) during the 2004 World Cup.

In addition to the camp allowance, Falcons who actually play at tournaments are promised match bonuses that are set by the NFF depending on how well players perform.

“The match bonus is where players really make their money because the federation might come out and say you win one match it’s $1500. You pass first round you get $750,” Akide-Udoh said

It is no surprise that the Super Falcons are paid significantly less than the Super Eagles. Unlike the Falcons, the allure of the Eagles looms large and infinite in Nigeria’s public consciousness. The Super Eagles gave us the dream team of 1996 that made Nigeria the first African nation and the first non-European country in 68 years to win the Olympic gold. And the Eagles have been credited with being one of the rare sources of patriotism in the country.

One of the problems we have encountered in trying to raise funds for the women's game, is the perception of lesbianism therein

Men have long dominated African football, particularly in terms of viewership; the Eagles are the kind of team that can attract 40,000 football fans to a 25,000-seat stadium in the world’s most crazed soccer nation. Type in "Super Eagles" in Google and you’ll spot their salient Wikipedia entry dubbing them the “Nigeria national football team.” The default. As if the women’s team were an accompaniment to check off attempts at gender equality.

But the gender pay gap is not just unique to the Falcons. Star players of the U.S. Women’s National Soccer Team—the reigning champions of the FIFA Women’s World Cup— filed a wage complaint with the Equal Employment Opportunity Commission against the U.S. Soccer Federation in March, saying they are paid far less than the men’s team.

The Falcons, on the other hand, can’t afford to strike and aren’t as indispensable as the Eagles. “If they revolt there are hundreds more who play locally who will join,” said Colin Udoh, veteran sports journalist and ESPN contributor.

Outside of football, the gender pay gap is a global phenomenon that cuts across all fields. The World Economic Forum reported that women are only now earning the amount men made in 2006 and it will take a little over a century to close the wage gap entirely.

Football aficionados argue that the men’s teams generate more money than women’s teams and as such are prioritized over women, even by football world-governing body, FIFA.

The disparity trickles down from the top. FIFA awarded Team USA a cash prize of $2 million last year after winning the Women’s World Cup. While that might sound like a handsome sum, it pales in comparison to the $35 million it awarded the German men when they won in Brazil in 2014.

“A bulk of FIFA’s revenue is from men’s teams,” said Udoh. “It’s from that revenue that they sponsor the Women’s World Cup.”

FIFA appears to have set a model for member associations the world over which says compensation for the sport depends on revenue generation. But are all national team players in its participating countries given the same opportunities to succeed?

The Nigerian Football Federation told Okayafrica that it plans on paying the Falcons their overdue bonuses before they leave for Cameroon. NFF Media Officer Ademola Olajire began his rebuttal of the news reports with four firm “no’s.”  The $50-per-day payment was more of a transportation allowance, he said.

“The Falcons are being owed monies for one or two qualifying matches. They will be paid and it’s outstanding. When something is outstanding it is going to be paid, it’s not that it’s been wiped out.”

The federation has become known for delaying payments and owing bonuses and salaries to coaches and players alike.

“There is no money in the federation to even pay Super Eagles’ players, let alone the Super Falcons players,” said Romanus Ugwu, a sports journalist for The Sun, Nigeria.

The Falcons are also not immune to the financial troubles that have stymied the Nigeria Football Federation. The federation’s main sources of funding come from the government and private sector, with a bulk of the revenue originating from the former.

Corporate sponsorships have dwindled. Sponsors like Peak Milk, which used to be the milk of the national team, pulled out last year. Recently, Globacom failed to renew its contract after it expired. The recession is one of the reasons private sponsorships have declined, but other matters such as in-fighting and lawsuits within the NFF have repelled prospective sponsors.

The federation’s current sponsorships are not dedicated to specific teams. They are “all-embracing” as Olajire puts it. He added that their marketing department and the leadership are working towards securing new private partnerships. For the Falcons they are also targeting companies that produce women’s products.

The NFF is also at the mercy of the predilections of potential sponsors. Earlier this year, Vice-President Seyi Akinwunmi said certain misconceptions about the Super Falcons have contributed to turning sponsors away.

"I noted that one of the problems we have encountered in trying to raise funds for the women's game, is the perception of lesbianism therein," he said.

“The driving force is the market,” said Ugwu, the sports reporter with The Sun, Nigeria. “The Super Eagles is a bigger brand than Super Falcons."

“If Super Eagles are playing you have more Nigerians glued to their TV,” he said. “The average Nigerian will want to read more stories on Super Eagles than on Super Falcons.”

The Eagles have traditionally drawn more attention, but it appears the times are changing. The 2015 FIFA World Cup match between the USA and Nigeria attracted 5 million viewers on FOX, making it the most-watched football match ever on the network. While there are no numbers to confirm that the viewership was similar in Nigeria, it appears women’s football is pulling more interest.

“Women’s football has been getting more and more viewership,” journalist Udoh said. In time, increased viewership can translate to more revenue and consequently more sponsorships.

As the Falcons defend their continental leadership in women’s football this weekend, the Nigeria Football Federation wants them to look past its missteps.

“At the end of the day, playing for your country should not be premised on how much you get,” said NFF spokesperson Olajire. “Patriotism should not be denominated in naira and kobo, but the pride of wearing the national colors.”

But it will take more than just nationalistic fervor for the Falcons to thrive in football and patriotism goes both ways. Akide-Udoh believes Nigerians and football-governing bodies within and outside the country need to take the Falcons more seriously to get better outcomes. “If you want to win, you need to invest,” she said.

Chidinma Irene Nwoye is a freelance journalist based in New York City and a graduate of the Columbia Journalism School. She has written for Slate magazine and the Village Voice and enjoys covering African affairs and the intersection between politics and arts and culture. Follow her on Twitter @irenecnwoye.