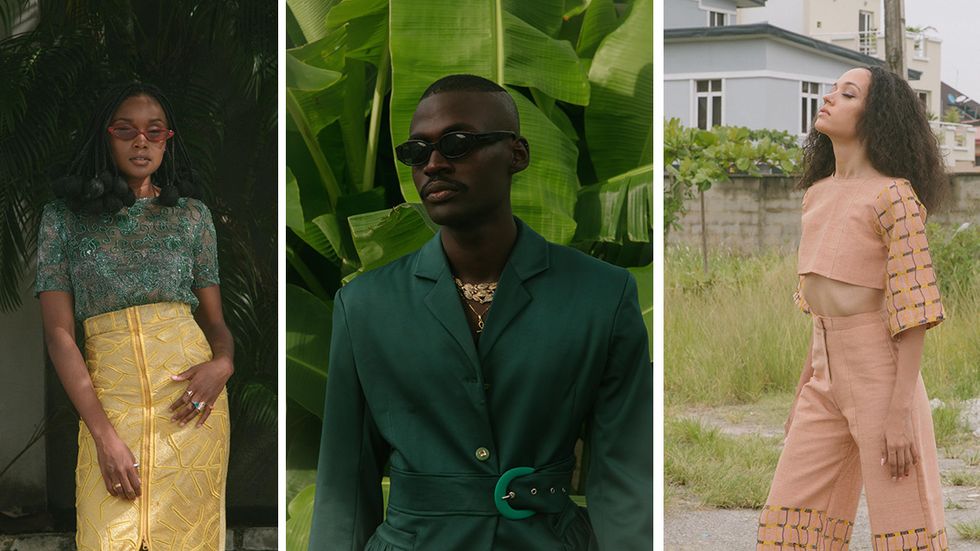 Photos by Daniel Obasi, via Coveteur.

These creatives represent just a glimpse of the influence Nigeria has on the culture.

Nigerian-American stylist and content creator Alexander-Julian Gibbsonreturns from his recent trip to his homeland with a fresh editorial featuring six Nigerian creatives you need to know for Coveteur.

Linking up with art director and photographer Daniel Obasi, we get to know the influencers who represent the new wave of culture makers who are pushing the cultural aesthetic, Afromodernism, forward.

We caught up with Gibbson briefly to learn more about how this project came together.

Antoinette Isama for OkayAfrica: Is this the first time you've teamed up with Daniel Obasi to work on a project? How would you describe working with him?

Alexander-Julian Gibbson: Yes, it was my first time working with him. It was great, he's very knowledgable on the Lagos scene, and has an eye for what's good. He's very mature and is such a talent for his age. I'm a big talent of his work and look forward to seeing him grow and continue to be celebrated.

Nigeria is overflowing with very talented creatives who are thriving in their own lanes—why did you select these six, and was it hard to narrow your list down for this feature?

It was a mix of tons of research and serendipitous circumstances. Before going to Nigeria, I did a lot of research on creatives. Obviously, being Nigerian I knew about a lot of the dope stuff that was coming out of Lagos, but I wanted to make sure that I got my finger on the pulse of Lagos while I was out there.

I wanted a diverse group, from different paths, and wanted both men and women to be represented equally. Each person I featured was someone that I believe had a different story and perspective to tell, but still had a certain tone of using the culture as a major inspiration for their work, like Adekunle—who has such a soulful and traditional approach to his music, or Orire—who's take on her designs pays homage to traditional Nigerian fabrics.

What's the main takeaway you want viewers to have when they learn more about these creatives?

Yes, these creatives are super-talented in their own right, but do not be mistaken, they are not outliers or special cases. There are so many other insanely talented creatives, young and old, in Lagos. Others who may have not had the opportunity to be celebrated as widely, but still have undeniable talent. I hope to use this to put a spotlight on Nigerian creatives and to create more opportunities for African talent as a whole.

In a sneak peek of the editorial below, you'll see some familiar faces, as well as some new ones you need to know. Check out the full feature here.