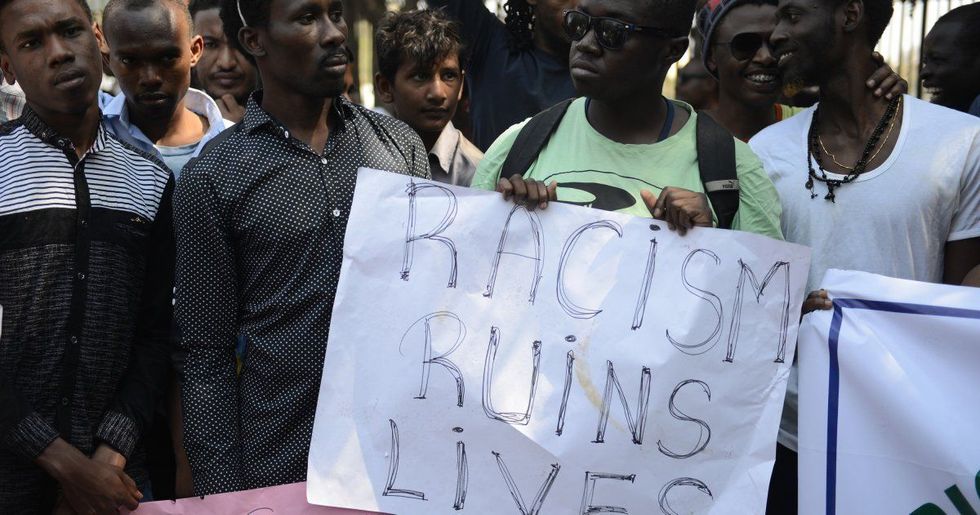 Recent attacks on Nigerian students in Noida, highlight the issue of violence against African foreign nationals in the country.

Indian officials plan to launch an investigation into recent attacks on Nigerian students living in Noida, an area just outside of New Delhi.

Five students were attacked by large crowds on Monday, and one was beaten inside of a shopping mall, BBC reports. The incident was caught on tape and the video has been circulating on social media. The victim told reporters that he was attacked with rods, bricks and knives.

An Indian mob brutally attacked Nigerian students and the incident is causing the nation to address racism. pic.twitter.com/ENBbrt1rOt

India's Foreign Minister Sushma Swaraj has promised an "impartial inquiry" into the incident, which is said to have been in response to the death of an Indian teenager who overdosed on drugs, which his parents believe were given to him by Nigerian students. As of today, five people have been arrested for their involvement in the attacks, reports BBC.

Leaders of the Association of African Students of India have advised that African students remain at home instead of attending classes on Tuesday.

Attacks on African foreign nationals in India mounted last year, after a Tanzanian student was assaulted and stripped by a mob in Bangalore.

Incidents like these are forcing the country to acknowledge issues of racism. Some have taken to social media to express outrage and advocate for change in the nation.

Racist rumours lead to baseless murder charge against Nigerian students in NOIDA. When will we acknowledge widespread racism in India? https://t.co/x9QwSpVhef

Update 3/29/17:Hindustan Times has reported that a Kenyan woman, Maria Burendi, was sent to the hospital following an assault in Greater Noida earlier today, where she was treated for abrasions on her hand.

She was allegedly dragged from a car, slapped and beaten in the stomach by locals in an apartment complex mostly occupied by Africans. The victims friend, Adamu Muhammed, says that Burendi "is in trauma and is not speaking to anyone on the matter.”

Authorities have promised action in finding the attackers. Additional police forces have been sent to the area. African students are being told to stay in their homes in the wake of the attacks.

This marks the third reported attack on African nationals in Noida, India this week.

@fatimaaliu A Kenyan woman's attacked. An advisory 4 all African students in India to remain indoors. I'm so angry! https://t.co/nJMXVrc3mr