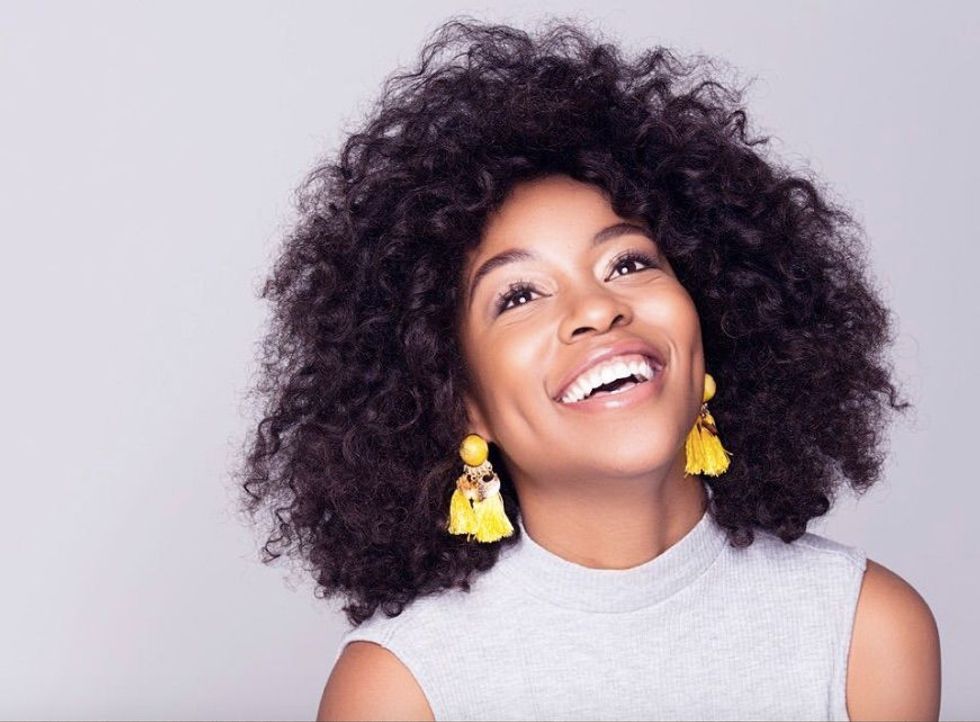 Nomzamo Nonzwakazi Nxumalo Mbatha, 27, is a South African actress and model whose light shines so bright it literally hits you and leaves you dumbfounded for a few minutes. A quick Google search or social media browse confirms her outer beauty. Speaking to her confirms she possesses the kind of personality that makes it evident there’s no reason success wouldn’t align itself with her. Mbatha is creating a resume that is the stuff dreams are made of. She is the first South African face of Neutrogena, a L'Oréal Paris hair advocate, a Puma and Audi ambassador.

The actress’s rise to stardom came after making it to the MTV Base VJ Search finals in 2012 and landing a role on the series Isibaya. Since the onset of her career, she’s been in the series Umlilo, starred in the film Tell me Sweet Something and has hosted a multitude of gigs: 2016’s MTV Music Awards Africa, All Access Mzansi, BET Africa’s A-List, BET’s 2017 International Awards and their most recent International Glitz and Glam event for Black Girls Rock. She’s even landed the covers of Cosmopolitan and Marie Claire SA.

We could go on and on about her accolades, but what's most captivating is her journey to the top. Born and raised in KwaMashu, a township located Northwest of Durban, by her paternal grandmother, she recounts what lead her to discover her calling: “I grew up as the only child in the house that I was raised in. My grandmother was like, ‘I need a little girl to go send to buy milk and bread.’ I would get bored and I would have to find different things in the house to keep busy with and one of the things would be just reenacting or making up scenarios in my head and speaking to myself in the mirror. I would cry as if it was true. Looking back now that was the love and the beginning.”

Nomzamo has been blessed with a knowledge of self that is well beyond her years. She draws inspiration from Omotola Ekeinde, the Nollywood star, because of how she’s built her brand as well as Viola Davis, Meryl Streep, and Denzel Washington because they are strong, giving, and unselfish performers. On red carpets, the model is often seen wearing African designers like Rich Factory—mindful of the exposure it affords them.

When speaking about posing naked on the cover of Marie Claire, she tells me, “It is about self-empowerment and self-awareness. I am empowered in the body that I am in and I am not ashamed of it. We should own our bodies, our fat rolls, our ugly toes.”

We laugh about her being roasted on social media for the appearance of her toes. The actress posed for the charity Baphumelele, which is rooted in providing temporary shelter for orphaned children and young adults with chronic diseases such as HIV/AIDS as well as skills to the unemployed. In the fall, she is set to serve as an ambassador for Essence Festival in Durban. Attending the festival in New Orleans this summer profoundly moved her, I thought 'what an important platform.' What an important and stunning platform! I believe in it so much because it doesn’t just incorporate the music and celebrity aspect of things, but it has the business stage, the empowerment stage…”

She believes in the platform so much that she has pledged to provide 20 buses with her own funding, to help provide transportation for Durban's youth to experience the festival. She will hire two to three young team leaders to chaperone each bus and train them on everything there is to know about the brand. This push is a quest for 40 plus “go-getters and global-shakers” to develop skills in project management and a way to combat unemployment. When asked what other causes speak to her, we delve into something that hits closer to home.

“I am starting my Foundation called The Lighthouse. About 2 years ago, my baby sister committed suicide. She was 20 and she suffered from mental illness. I just feel like mental illness is something that is so taboo that no one wants to tackle it, especially in family structures. This is part of my healing process. I hope that I can help other people who are battling depression and help parents and young people that have had friends, sisters, cousins, aunts, dads, moms commit suicide or who have a mental disease with a support structure," says Mbatha.

"The support structure will have psychologists and therapists who not only deal with the illness in a physical manner but also in a spiritual manner. I feel like the spiritual element is missing. Sometimes when one is first introduced to a psychologist or a therapist, they’re like ‘this person doesn’t hear me. I don’t feel like this person actually sees me as a person and hears me as a human being. They are merely looking at me as an object and as a subject.’ Part of my foundation is finding professional people who have a spiritual element so that when people are out in the world they are able to survive. It is beyond a medical condition; it is a spiritual journey so that they are able to find their way to healing.”

Despite a schedule that is extremely packed, she will soon be returning to the University of Cape Town to complete her final year of school in accounting. “I believe in the art of completion and finishing what you’ve started,” she says. Talk about a superwoman.

When she isn’t working, she’s reading, watching movies, and doing POUND®, a new workout craze that involves using drumming to get toned. I tried to delve into whether or not there’s a special man in her life, *coughs* Maps Maponyane *coughs* and was simply met with a laugh and an “I’m happy.” She is currently listening to the likes ofTiwa Savage, Beyoncé, DJ Khaled, Cardi B, the recent AKA and Anatti collaboration, Cassper Nyovest, and Amanda Black.

In the near future, she is in a film called A Hotel Called Memory and her production company Ground Six is set to help support film students who can’t afford to attend film school. With so much on her plate, Mbatha is certainly one to watch out for.

Flashback to my Photoshoot shenanigans I'm Definitely an unstable human being. 😂😂😂 Song: @tiwasavage - All Over

Audrey Lang is an alumna of Northeastern University and a Boston-based merchandiser who’s enamored with all things fashion, art and Africa. Keep up with her on Instagram and Twitter.