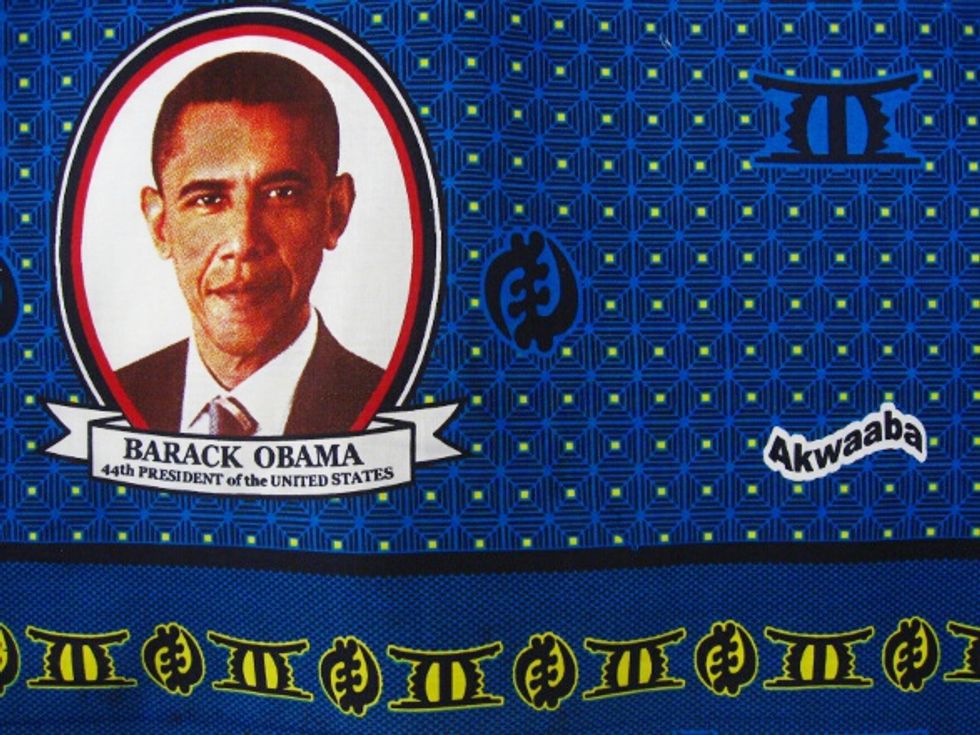 It's a collaboration between Aisha Cousins and Delphine Fawundu called Story Skirt Project about skirts made of African political fabrics including President Obama.

Needless to say, when Barack Obama became president, he made a mark in the United States of America and the world itself. America made an historic decision allowing the youth and minorities to dream bigger by electing Obama to become a positive role model and an inspiring world-historical political figure. Several arts projects have surfaced concerning the impact of Obama's political decisions and commitments on our lives. It's been a pleasure to witness a change in mentality and awareness-raising under his leadership. In 2012, artists Aisha Cousins and Delphine Fawundu began collaborating on a project that helps women pass on history to future generations in their families through African political fabrics. For Mother's Day, the pair sat down to talk about fashion, politics, and how motherhood inspires their work.

*Aisha Tandiwe Bell poses with her daughter at their home in Bedford-Stuyvesant. Aisha's mother is from Jamaica, but she was raised in the US and did not expect to elect a black president in her lifetime. After she sewed skirts for herself and her daughter, her mother requested one as well. Her skirt is made from a fabric printed in Ghana in 2008 to commemorate Obama's first inauguration. You can purchase enough to make your own skirt here

Aisha Cousins: How do you describe the Story Skirt Project to people when you show them your photos?

Delphine Fawundu: I tell people the Story Skirt Project is a unique form of artistic expression that connects all of its participants through the creation of Obama Skirts. Elements of African culture are embedded into the project through the fabric and the process of having the skirts tailored.

AC: You've done several projects that discuss aspects of Obama's presidency. Can you talk a little bit about these and how it feels to be doing something that merges both fashion and political history together now?

DF: I worked on a series titled, "In A Time of Change" that focused on progress for Black and Latino young males in the age of Obama. It was really a project that provoked the viewers think and re-think the future of Black and Latino males in America.

AC: There was also a short film, Dear Mr. President?

DF: Yes - Dear Mr. President came after "A Time of Change." It was released right before the elections - so it was a letter to whoever the next president of the United States would be, but it also documented how youth were feeling at the end of Obama's first term. I produced it along with Kayinde Harris. We were very interested in hearing how young people engage and view political and social issues in this country. It's a short film of teens expressing their views and concerns to the President of the United States.

DF: I photographed my oldest son Amal for In A Time of Change. I must say he really enjoyed working it. Amal had ideas on the books that he was photographed reading and what locations to take the portraits at. He especially enjoyed being interviewed and answering questions pertaining to his peer group.

I have three children, Amal 15, Che 13 and Kofi 9. Being a mom of three young men has influenced my subject matter at times. However, the main affect my children have is they inspire me to do the best work I possibly can. I try to exist in my best self - or my highest level of consciousness -- and I produce my work in this state. The work that I leave here on this earth will inspire future generations to come so, it means that I am not just producing work for myself - it's more for everyone else.

*Amal Fawundu (Dephine Fawundu's son in In a Time of Change)

DF: Yes, I did some style videos in Africa for Society HAE, including one on Seun Kuti. I've also done pop-up studios at museum events in New York City with them. All of the projects highlighted personal style.

AC: Speaking of personal style, you've traveled to Nigeria and a few other countries this year for another project. While you were documenting the Skirt Project, did you see any differences in how African and Afro-American women wear these kind of fabrics?

DF: From what I saw these fabrics seem to be worn in similar ways. In west Africa the cuts could be a little more elaborate. So you may see the fish tail design - fitted from the waste to the knees the flared at the bottom. Longer skirts are very common in Africa as well.

AC: How do you feel about the Obama fabrics from Ghana that you've been documenting?

DF: I like the style and color of the fabrics. They are pretty cool and make a powerful statement. They bring to mind a fabric from Sierra Leone my mom owned.

AC: How do you feel about helping introduce other US women to the fabrics through your photos? Would you like to see the Story Skirt Project have an affect on US fashion?

DF: I think that the cultural exchange is great. It is a way for people to learn from each other and be inspired. These printed fabrics continuously inspire US fabrics. Even now, it is not odd for me to buy a dress, skirt, or pants from a major brand with similar colorful printed fabrics.

*Hillary Porter poses with her daughter at their home in Bedford-Stuyvesant, a predominantly black neighborhood in Brooklyn, NY. Her top is made from a fabric printed in Ghana in 2009 to commemorate the Obama's visit to Accra. It was sewn by Abu Gangue, one of several Senegalese tailors who have opened shops in her neighborhood.

AC: Most of the women in the Story Skirt Project have children younger than your Kofi. Your photos will become a big part of how they understand this moment in history when they get older. How do you feel about playing that role of helping mothers communicate history to their children?

DF: Kofi was extremely excited about the presidential election. He and his brothers would actually create imaginary presidential speeches. It made him aware of some of the issues that the candidates chose to focus on - he thought of issues such as food politics that no one ever talks about. Kofi is just starting to understand social injustice and issues of that nature. I'm sure he will have stories to tell his children.

I feel like communicating history to children is one of my life purposes - so I am grateful to be collaborating on the Story Skirt Project. It is exciting because it does so many things on so many levels. On one end it is a fashion statement, but within that there is a strong message. It was kind of moving to hear you had this idea back in the 90's, when the thought of having a black president in America was something so far fetched. These photographs will document women, families, and a particular mindset for future generations to analyze and learn from.

The Story Skirt Project uses skirts made of African political fabrics to document how black women from U.S. families see the world differently since electing their first black president. Skirters work with African designers and photographers to create garments out of Obama fabrics collected from African countries and document them. Skirters then vow to pass on the garments to to future generations in their families. The resulting portraits and stories are shared with the public to spark conversations about African and Afro-American women's political histories.

To volunteer, donate, or bring the Story Skirt exhibit to your area visit here.