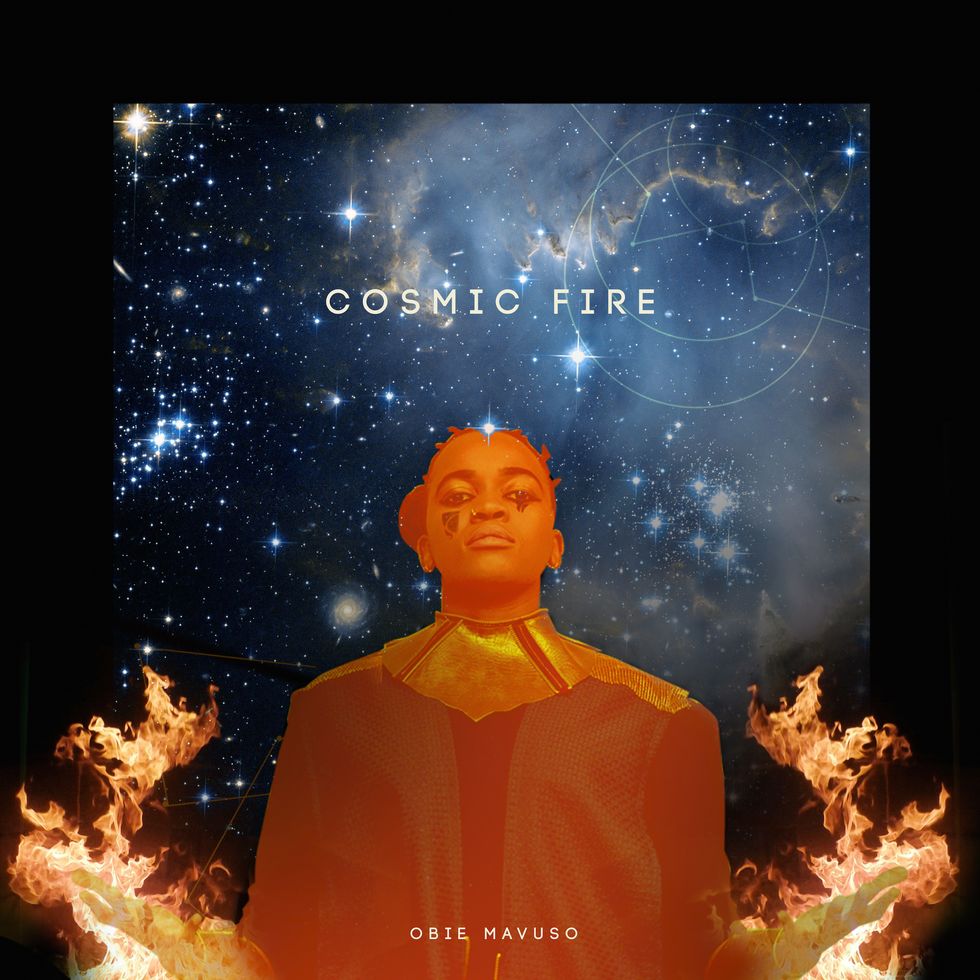 “I am an alternative artist in South Africa, who happens to be black and queer. Everything about me is not what people are used to,” says OBie Mavuso on the topic of putting out music as a black, queer artist in a predominantly heterosexual, cisgendered and masculine scene. For the 25-year-old singer-songwriter based in Cape Town, being taken seriously as a musician is a daily challenge, but it’s something she takes ownership of.

“I think it’s up to me to try and change how people view the ‘alternative’ being," Mavuso writes via email. "Power dynamics are something that the local scene is still struggling with. Change is not easy to accept, but promoters and the media can start by including a wider range of musicians and artists in their line ups and write ups.”

If toppling constructs of power and perception are the topic at hand, then Cosmic Fire is one of the tools being used to knock it all down.

Produced and mastered by Cape Town’s Thor Rixon and Original Swimming Party, the three-track EP is, as Mavuso puts it, “A journey through my mind and being, barely making sense of things, but so aware of things that have to change, and things I can change.”

The title track opens the EP with swelling basslines that rise and rise before giving way to Mavuso’s bold and resolute vocals, weaving together intimate and captivating tales of incendiary love and chance meetings. “Human” is a languorous and somewhat forlorn track characterised by its choppy drumbeats and melancholic vocals, while “Oppressive Symptoms” concludes the EP on a powerful note with striking, free-flowing lines sounding out atop a pedestal of alternating keys, all backed by a choir of otherworldly vocals. Cosmic Fire is Mavuso's strongest release to date.

A quick journey down the musician’s SoundCloud offers insight into her experimentation over the years, slowly breaking away from a conventional hip-hop sound and constantly refining her vocals. Considering music isn’t yet a full-time gig for Mavuso, her repertoire becomes even more impressive. But don’t ask her to speak about her own music. She’s surprisingly blasé about it all.

“I write songs differently and I also spend different times working on them, based on the message and how I am feeling at the time,” she says. “Cosmic Fire was freestyled and rehearsed. I used lyrics I had written before and added new lyrics as I was recording. It happens. I have learnt to let go and just enjoy the moment and the music.”

From a young age, Mavuso learnt to find solace in music. To visit the artist’s musical origins would find you in Keiskammahoek, a small Eastern Cape village on the outskirts of King William’s Town. “When I was in primary school I started collecting cassettes around the house. Radio was a thing back then and good music was at its prime,” she recalls. “I would listen to Radio Ciskei (Now Tru FM) and record my favourite hip-hop, soul and local tunes on my cassettes. That kept me very happy.”

Nowadays, Mavuso finds happiness through her own music––a blend of hip-hop and soul, paying homage to her cassette tape days, but with an alternative twist. It’s experimental at times, with greater emphasis on electronic elements and with a delivery that finds a home in that small area between conversation and monologue.

An average day for Mavuso also sees her wearing the hats of filmmaker and podcast host. On the side, she’s the curator of two niche platforms, Jam That Session and Queers On Smash, which serve as a celebration of up-and-coming black, queer musicians.

“I know how real the struggle is for a young artist in South Africa,” explains Mavuso. “Sometimes even a little push from a company like Jam That Session is necessary for growth and sometimes that’s the only push you will get, because some companies just won’t want anything to do with you as an artist.”

Cosmic Fire is out today. Listen above.