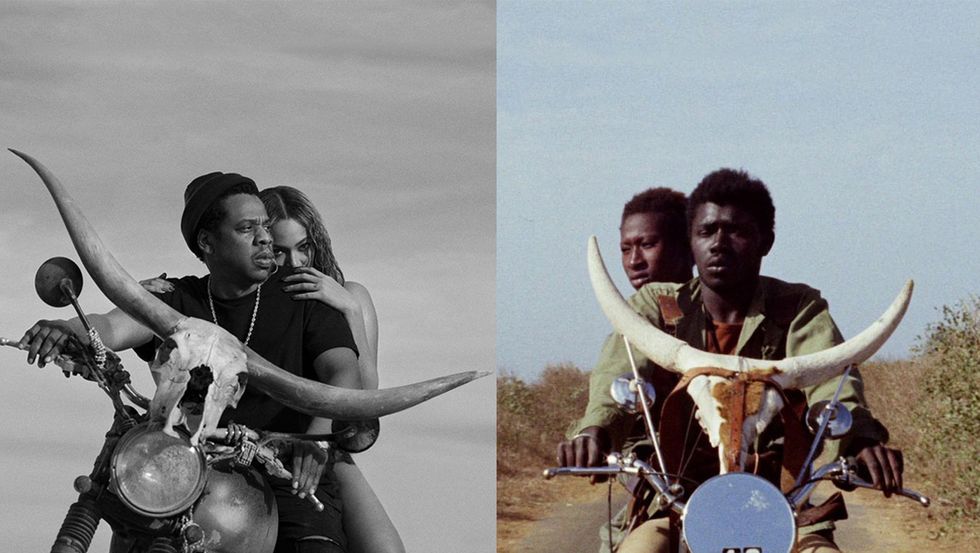 The image of Beyoncé and Jay-Z on a motorbike is inspired by a scene from Djibril Diop Mambéty's 1973 film Touki Bouki.

If you haven't heard the news by now, Beyoncé and Jay-Z are going on tour again this summer, for the On the Run Tour II.

The couple shared the news this morning, with Beyoncé taking to Instagram to share a video announcement and two black and white promo pics of her and Jay-Z in their signature Bonnie and Clyde-inspired personas.

While we already appreciated the campaign's artistic vision, Sierra Leonian-Guinean multidisciplinary artist Ejatu Shaw—who we interviewed late last year about her dreamy photo seriesPoly—pointed out another detail that makes the tour's aesthetic vision even more noteworthy.

One particular shot of Beyonce and Jay-Z riding a motorbike trimmed with a bull's skull, references a scene from the 1973 Senegalese film Touki Bouki.

This is far from the first time, the artists have looked to the continent for creative inspiration.

"Whilst doing visual research for my photography projectPoly back in October, I developed a deep interest in Senegalese film," Shaw tells OkayAfrica.

"Seeing the striking images from the On the Run Tour II promo today, I was immediately reminded me of an iconic scene from the brilliant Djibril Diop Mambéty'sTouki Bouki, which pictures main characters Mory and Anta journeying on Mory's motorbike which is embellished with bull horns."

The film's premise is one of love, adventure and escapism—themes that Carters also famously embody.

"Their main goal is to flee to Paris, which to them is a promised land with better opportunities and a life of glamour. The motorbike is a pretty important part of the film, present in the scene where Anta and Mory make love (another very iconic and beautiful scene), but also used as a symbol of Mory's connection to his Senegalese roots, and we later see in the movie his reluctance to move to Paris, when he leaves the ship that is supposed to take him in the promised land to go ahead and seek his bike, showing he values his heritage more."

The Wolof language film premiered at Cannes in 1973, but wasn't released in the US until 1991. Watch the trailer below. The On the Run Tour II begins June 6 in Cardiff, UK. Tickets go on sale starting March 14.