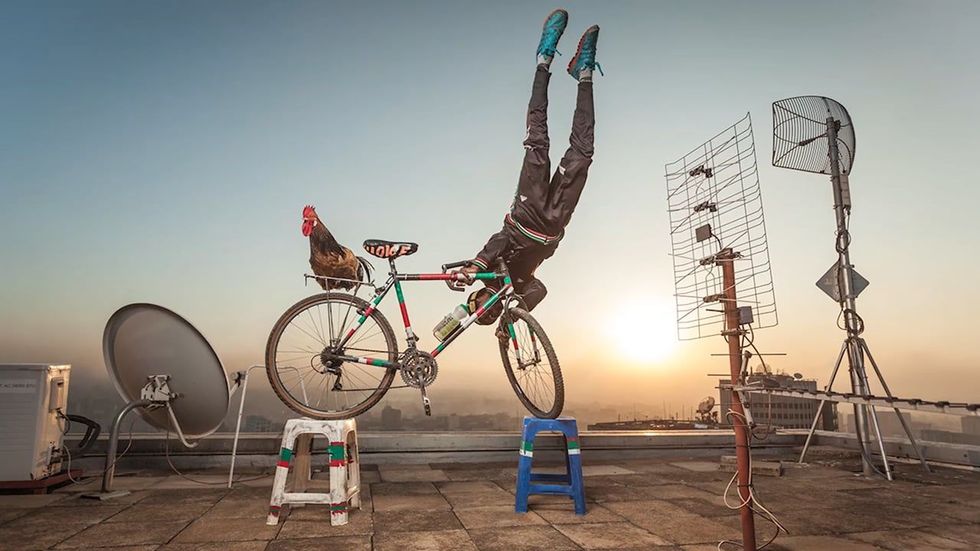 Kenyan photographer Osborne Macharia opens up in this video about the inspiration behind his jaw dropping photo projects.

The first time you see Osborne Macharia's work is a moment you'll never quite forget. We've been following him for years now and every new photo-project he produces stops us mid click. They're surreal images of the highest order—the kind of thing that while obviously fiction, you so badly want to be real that your brain makes them real.

Everything he does now get picked up internationally, inspiring credulous stories in the press about extravagant Kenyan grannies and hip hop grandpas. Our favorite project is probably the images of Kenya's female freedom fighters with opulent hair but everything he does, including his commercial work, has that sense of otherworldliness to it which has brought him wide acclaim. In the video above he talks about how everything he does is about "fiction, culture and identity" and that the key to his work is to keep refining the concept. Watch to see how this Kenyan photography master composes and produces his photo series and all the behind the scenes work from his team of creatives that it takes to make these images.

Some of his projects we've covered in the past are:

This Extravagant League Of Kenyan Grannies Is The Ultimate In #SquadGoals

Check Out This Kenyan Collective of Eccentric Hip-Hop Grandpas

DUDUS.....member of Nairobi's Underground Fight Club who's fighters are exclusively people of short stature having undergone years of intense training since they were 5yrs old. It’s been said that it is an elite wealthy group of former fighters that sponsors and manages the network. They take part in other fight clubs across the globe and have titles to their names. Styling/production: @kevoabbra2 Hair: @rickykish MUA: @sheetal__patel Illustrations: @jcreativemynds

Perspective is a series produced by East African speaker bureau and talent agency African Speakers + Artists (AS+A) profiling Kenyan photographers. AS+A is committed to illuminating the perspectives and amplifying the voices of dynamic African speakers and artists. The photographers are represented by partner agency ProKraft Africa. Special thanks to Blinky Bill for the music featured on this video.