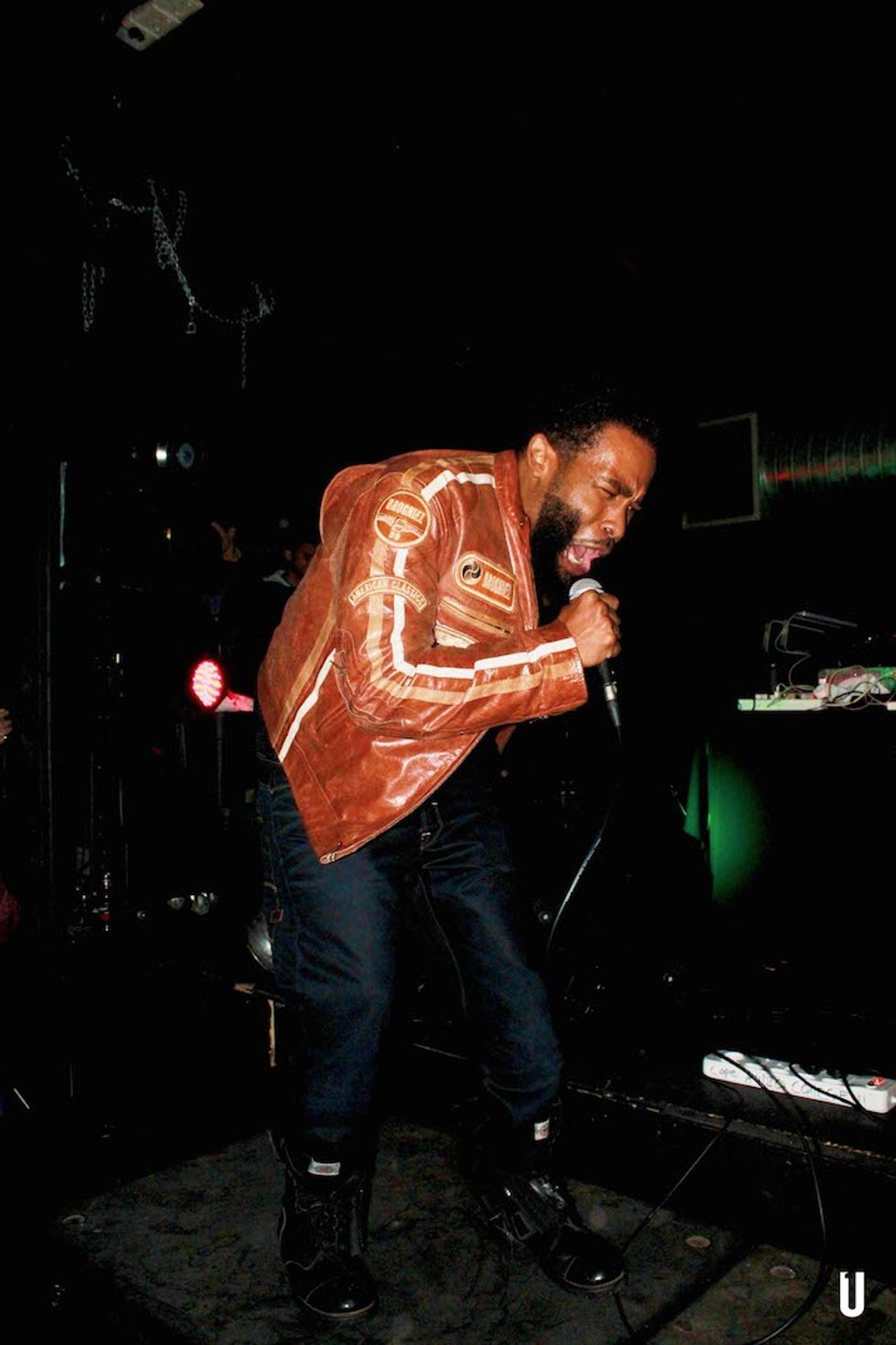 All photos by Obakeng Moroe

Lyrical maestro Pharoahe Monchreturned to South Africa last week for an energetic exhibition of his boundless verbal abilities during a blood pumping performance at Zula Sound Bar in Cape Town. Hosted by the charming Khanya “Kyeezi" Siyengo, the event saw Pharoahe upholding the legacy he created as a member of Organized Konfusion, as well as with the establishment of W.A.R Media and his recently released album, PTSD. All of the DJs, which included Eazy and ONQ, maintained a high standard, with Pharoahe’s infectious energy matched only by the crisp lyrics and a thorough setlist that included tracks from his previous releases as well as the new album. In true Pharoahe fashion a narrative was maintained between his physical ailments and the thematic concerns of both his projects, making the show as heartfelt as it was skillful. It’s telling that the perpetually emphatic MC managed to attract an impressive turnout on such a gloomy Wednesday night, especially considering his moment to rock the stage came after Whosane and TheCITY had wrapped up an electrifying set that ended just past midnight.

Highlights of the night included Pharoahe tapping into his enviable stamina to effortlessly stride through tracks such as "Bad M.F" and "The Jungle." Just as with his multisyllabic rhyme schemes and conceptual quantum leaps, this show was typical of an artist who not only tells stories vividly, but weaves hip hop with equal amounts of emotion and reason to give us a timeless experience. DJ Revolution’s mixing skills fed the attention of the crowd and Whosane’s pleasantly surprising singing voice was only just comparable to that of the beautiful and mystifying Bonj Mphanza. But enough about what we thought, let’s see what Cape Town's Pharoahe enthusiasts (and one opening performer) had to say. Read on below and peep an exclusive photo set from Cape Town-based photographer Obakeng Moroe in the gallery above.

"There was a moment during Pharoahe’s set ,where he said “I know that if you can open your heart, you can respect life." It was from then that his persona and unabashed positive outlook on life turned this into a rap gig unlike any I’ve seen since Kanye West circa Graduation. Although Pharoahe was great, Cape Town band TheCITY stole the show. I’d seen them before but not on this kind of top form, and there’s something really beautiful about start-ups the majority of the crowd didn’t know stealing the show from a performer or Pharoahe's discography."

"I was expecting something big, it's Pharaohe Monch of course. I hadn't heard anything after he released Desire and up until that afternoon I've still been listening to Organized Konfusion records for the most part. So, I expected something big but I didn't know what to expect exactly. TheCITY blew me away and in retrospect I agree with the friend I arrived with when he said that the night was about TheCITY. The instrumentalists and stage presence of the outfit was on point. The brother Whosane came on with TheCITY accompanying him on the set. Working together the ensemble produced a combination of live music and great bars that I have not heard in a while providing a refreshing Hip Hop experience. PHAROAHE! DJ Revolution was cutting like slipknot fans while Pharoahe brought that style and energy we love him for. The man's stage presence is exactly the same as the energy he puts into his tracks. He's a craftsman, an artisan in delivering the verses almost identical to some of the most complex lyrical rhythms that he puts out in his music. It's even better live. Needless to say I appreciate most of all the time and effort the man invested in making that performance not only worth the money but also meeting the high expectations I had for the show. Much Love and Respect for that Pharaohe! "Pharaohe fucking Monch ain't a damn thing changed!""

"There were a number of racial issues being covered in the news last week and it seemed like our voices weren't being heard over the clamor of defensive protest. So to perform at a live hip hop event midweek, knowing that so many of us would go back to cubicles working for "the man" the next day, was great. It felt amazing to see a packed live music venue in Cape Town with an audience representing the demographic of South Africa. It was also quite an honor to have been invited to share the stage with Whosane & Pharoahe Monch, it was altogether a great evening"

"He blew my mind… he puts so much machismo into his performances but in such a relatable way. I was shocked at how packed it was, considering Cape Town’s rep for unpredictable turnouts. Mos Def didn’t show up by the way which was weird because I got the feeling some people were expecting him, although I didn’t leave disappointed. The band behind Whosane made my night, they were so slick. Also, I’m curious about J-One, his beats showcase was dope!"

"That was one of the most powerful hip hop shows Ive ever been to.  Pharoahe kept the crowd hyped and engaged from the moment he stepped on stage. His energy, delivery and wordplay is unmatched. I got more than my money’s worth and I would do it again and again and again"