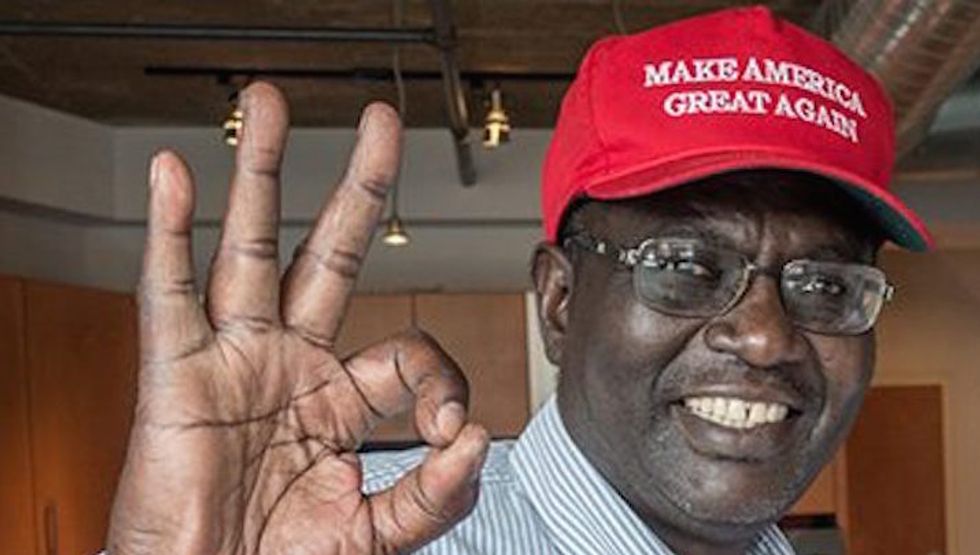 “I like Donald Trump because he speaks from the heart.”

President Obama’s Kenyan half-brother Malik Obama has come out of the woodwork again. If you remember, he made headlines in 2011 when he married his third wife, a teenage bride.

He’s in the news again, this time as a Donald Trump supporter. Gasp—this may be grounds for being disinvited to any future Obama family functions.

The New York Post spoke to Malik, a long-time Democrat who lives in the rural village of Kogelo, to find out why he says he’s voting for Donald Trump in November.

“I like Donald Trump because he speaks from the heart,” Malik says. “'Make America Great Again' is a great slogan. I would like to meet him.”

The 58-year-old says his “deep disappointment” in his brother’s administration has made him reconsider his party allegiance, announcing he has switched to the “party of Lincoln.” Say what now? Who knew there was a third U.S. party?

Apparently it was Democratic candidate and presumptive nominee Hillary Clinton’s private email server scandal, and FBI Director James Comey’s recommendation to not press charges earlier this month that pushed Malik to consider the merits of Trump, which is zero (in my mind at least).

“She should have known better as the custodian of classified information,” Malik says.

Malik adds he’s upset over the Obama administration’s execution of former Libyan Prime Minister Muammar Gaddafi, who he refers to in the interview as one of his best friends, under Clinton’s watch as U.S. Secretary of State.

“I still feel that getting rid of [Gaddafi] didn’t make things any better in Libya. My brother and the secretary of state disappointed me in that regard.”

Obama’s half-bro, who believes strongly that marriage is between a man and a woman and is rumored to have a dozen wives, is also discontent over the Democratic party’s support of same-sex marriage.

“I feel like a Republican now because they don’t stand for same-sex marriage, and that appeals to me.”

Well, in that case...Trump is a welcomed choice.