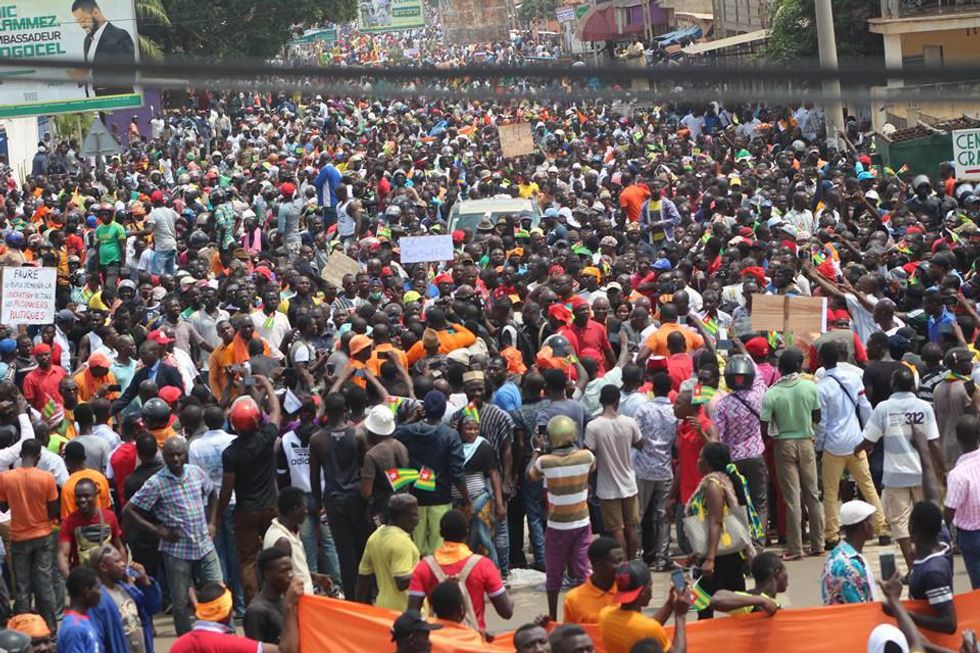 Hundreds have taken to Lomé, Togo to protest the presidency of Faure Gnassingbé, despite growing military and police threats. #TogoDebout

Demonstrations have resumed on the streets of Lomé, Togo in protest of current president President Faure Gnassingbé.

Several have taken to the capital to demand that the long-standing president—whose family has been in power for over 50 years—resign amidst head police and military presence. People are also pushing for limitations on the presidential term limit.

A government ban on weekday protests was lifted over the weekend in Lomé, while restrictions are still in place in the opposition stronghold, Sokodé, where security forces disbanded large gatherings with gun shots.

This is how militaries start shooting at crowds in neighborhoods to stop them from joining the protest in #Togo… https://t.co/FBAPgNArWp
— Farida Nabourema (@Farida Nabourema) 1510062959.0

Anti-government protests first started back in August. The government put a block on the internet in September in response to public demonstrations. In the past three weeks, 17 people have died and hundreds have been injured since the protests sparked back up, reports BBC Africa.

Tension is rising among protesters as highly armed militaries are currently being conveyed to the protest ground.… https://t.co/GKoii3q7ou
— Farida Nabourema (@Farida Nabourema) 1510070340.0

Despite the excessive oppression, the resilient Togolese people took to streets again today to protest 50 years of… https://t.co/WvRmb8uS1y
— Ici7Togo (@Ici7Togo) 1510068972.0