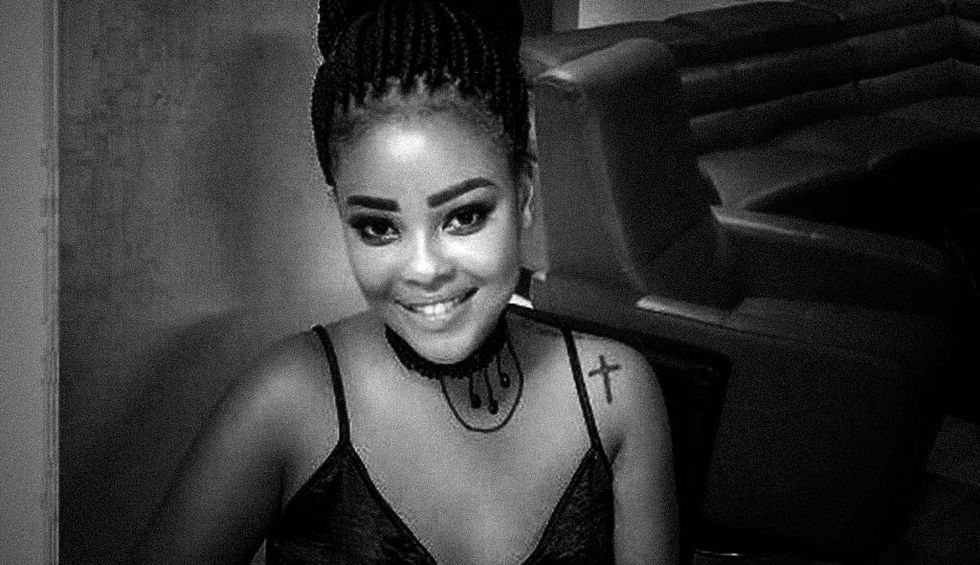 This hashtag has become the rallying cry for those who want to stop an epidemic of violence and against South African women by their male partners.

#menaretrash is not about singling out individuals says Rufaro Samanga in this op-ed. Instead, it’s a challenge to South Africans to speak out against the epidemic of women murdered at the hands of their male partners

South Africa—A few weeks ago, South African social media followers pulled the alarm about the gradual disappearance of young women and girls. As weeks have gone by, timelines have been flooded with post upon post of young women and girls who have gone missing almost every day. The insidious reason behind many of these disappearances has proven quite frightful indeed as we're learning that the culprits under our very own noses.

One of the young women who had gone missing and that I personally remember retweeting in an attempt to help find her, was found burnt beyond recognition and buried in a shallow grave in a deserted veld. As police began their investigation it surfaced that 22-year-old Karabo Mokoena was murdered by her boyfriend, who had even gone as far as helping her family look for her, knowing full well that they would never find her alive.

The death of this young woman hit close to home because it is a reality to which many South African women have become accustomed in one form or the other. South Africa has the highest number of women who are murdered at the hands of their partners in the world. In fact, of the women who die every eight hours, half of them are killed by their partners.

Rape and rape culture are rife with women being assaulted on university campuses, at their workplaces, in public transport—you name it. And not to mention the particularly hateful targeting and murdering of women who are a part of the LGBTQIA+ community. Yet, and this is where I struggle to maintain my calm, when the movement #menaretrash rightfully came into full force once again, the focus immediately shifted to 'but not all men'.

@T_Mothotoane we must not generalize on this #MenAreTrash issue,it's violating our rights of feeling free as men since it paints all of us
— Thabiso. (@Thabiso.) 1494748312.0

#Menaretrash began when a few women on social media last year, took it upon themselves to start calling out the problematic behavior of men especially with regards to the emotional and physical abuse they'd often experienced in their own relationships. The hashtag did not catch on initially and died down after a while. This year however, and with the highly publicised murder of Karabo, the hashtag has gained considerable ground and transcended into a palpable movement shedding light on the abuse, femicide and rape that is rampant in South Africa and often goes unreported.

Very much like #blacklivesmatter, another hashtag that became a movement with a massive following and had tremendous impact in the US, #menaretrash is attempting to have a similar impact and reach. Although it is still resisted by many, it has also been publically endorsed by prominent South African personalities such as Hlomla Dandala, Maps Maponyane, Thandiswa Mazwai and Boity Thulo.

That said, asserting that #menaretrash is not about singling out individual males and smearing them with the same brush. The #menaretrash movement is also not about avenging soured relationships or born from the scorn of so-called bitter women. That is important to note.

Firstly, #menaretrash attempts to do away with the respectability politics that seeks to police the way in which we as women decide to voice out our anger and frustration towards an oppressive patriarchal structure. One needs to understand first and foremost that as women, and particularly as feminists, ours is not to deliver our message prettily garnished in a way that is perceived to be more 'palatable' by men. In short, we are not duty-bound to mollycoddle the men who are a part of the very same patriarchal structure against which we are tirelessly fighting.

Women already have to do so much work on challenging patriarchy at home, in public & in the workplace. SA men need to step up.
— Venus HottenTHOT (@Venus HottenTHOT) 1494485601.0

Secondly, there is a shock value to the statement that is necessary in that it makes men immediately uncomfortable and it is precisely this discomfort that is necessary if we are going to begin to have any earnest conversations about the desperate plight of women in South Africa.

Frantically pointing out that you have a 'great father' or that you're in a happy relationship with a 'good guy'—true or not—serves to obscure real patterns of toxic masculinity, abuse and femicide which the #menaretrash movement is attempting to expose. It undermines the main conversation and swings the spotlight onto the oppressors and not the oppressed.

EVERYBODY STOP TWEETING. WE HAVE A GOOD BOYFRIEND OVER HERE, SYSTEMIC SEXIST VIOLENCE IS OVER. I REPEAT, SEXIST VI… https://t.co/vvfEr5C8ZC
— Sadie Torquato (@Sadie Torquato) 1494506012.0

But even after many women, myself included, have gone to extreme pains to deconstruct this statement for men (and some women), we have still been met with backlash. More evidence of the trashiness of men is inherent in how many of them have gone on to ask what part Karabo played in instigating her own murder. Fam, if I hadn't seen these posts with my own eyes, and from men I know personally, I wouldn't have believed it myself.

In addition to that, men have gone from trivialising the movement as a group of women desperately trying to remain ‘relevant’, shaming women who support the movement wholeheartedly but are in relationships (as if the two are mutually exclusive) to even going as far as claiming that ‘we all have a little killer in us’ as justification for Karabo’s murder.

#KaraboMokoena #SandileMantsoe We are all serial killers inside, we just able to control ourselves. Thus, I forgave him, he deserves bail
— K0NE` (@K0NE`) 1494589675.0

As if that weren't enough, at Karabo's funeral, our Police Minister Fikile Mbalula, lamented how such a beautiful young woman, a yellowbone (a term for a light-skinned black woman) at that, could be murdered as if to say that her murder would have been more understandable had she been ugly. If nothing else, that should awaken everyone to the sobering reality of women in this country.

My biggest disappointment however, has been the women who have rushed with bandaids and soothing words to the bruised male egos, their allegiance to the patriarchy worn proudly. Some of them even shared in the victim-blaming citing that they did not attract trash in their personal lives and that the rest of us should in essence, stop being so bitter. Some even went as far as claiming that Karabo was murdered because she wouldn't leave her abusive boyfriend because of his money.

As an unapologetic feminist I will continue to assert that men are trash. The men who say and do nothing when their friends manhandle, abuse, rape and even murder their female partners. The men who are so quick to loudly deny their trashiness and yet are silent about the trashy behaviour of other men. The men who do not consider the atrocities committed against us as crimes unless we as women are an extension of them in some way: a sister, an aunt, niece or daughter—they too are trash. And to all those who feel so hard done by this assertion, you need to check yourself.

Men are trash. And you will deal, beloved.