Respect Your Elders: My Father Returns to His Long-Lost Kenya—With His American Girlfriend 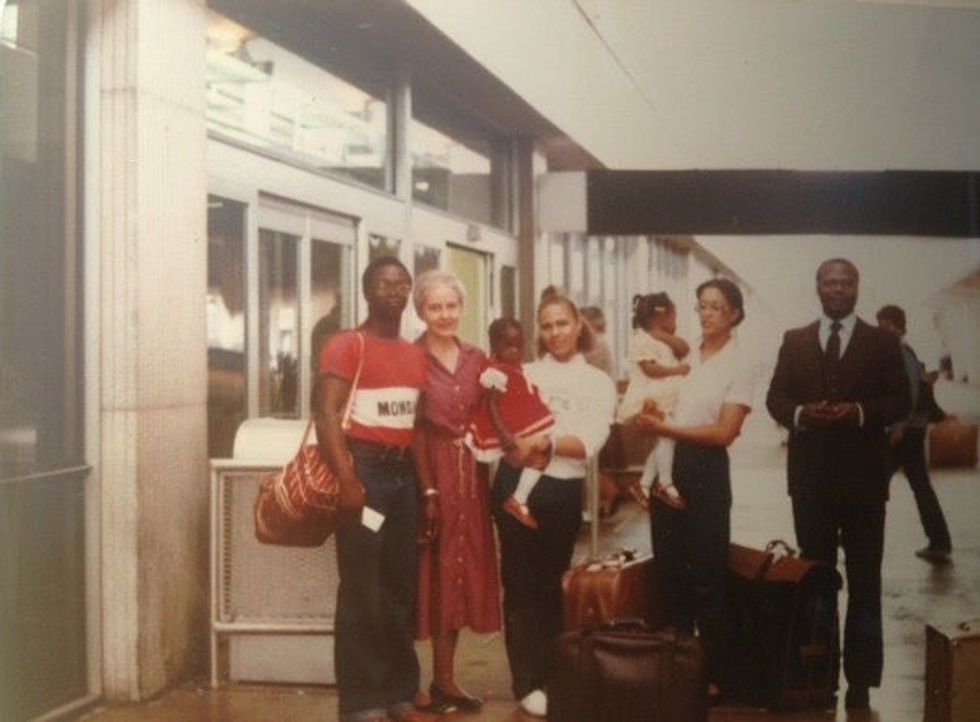 Our contributing writer speaks with her father on his trip to Kenya when he introduced his family to who would later become her mother.

Our series, ‘Respect Your Elders,’ gives our team here at Okayafrica the opportunity to discover the stories behind old photos of our parents and family members. In this edition, our contributing writer, Nereya Otieno, spoke with her father, James, to find out more about a photo her family shared with her. Her father is on the far left being greeted by family members once he returned from his first visit back to Kenya.

Earlier this year, I published a personal essay about my journey traveling to Africa as an African-American—a first generation American from my father’s side. In that essay I explore what it is like to meet a home you never knew, but I wasn’t able to explain how my African became hyphenated with American.

My father, James Otieno, was born in Kisumu, a lake town in Western Kenya and a 6 hour drive to Nairobi. He had modest means and grew up going to school and herding family livestock. When he was 11, his father received an opportunity to move the family to America while he studied dentistry—so my father found himself exchanging life in rural Kenya for Nashville, Tennessee in the early 70s. As my father says, he never knew he was black until he arrived in the US, then everyone kept telling him.

Eventually the family relocated to Minneapolis, Minnesota where my father attended high school and met a half-Scandinavian, half-Jamaican girl named Maren Jensen. She would later become his wife and the mother of his children. The second of those children would grow up to be a writer and travel back to Africa and write about it. Which brings us to present day.

Shortly after publishing that article, my family began sending me old photos of Kenya. One such photo is the one above. It was taken by my mother and depicts from left to right: my father, my maternal grandmother, my father’s little sister, my mother’s youngest sister, my cousin, my mother’s older sister and my paternal grandfather. This photo was taken immediately upon my father’s arrival back in Minneapolis after his first trip back to Kenya since he was a boy.

In this installment of Respect Your Elders, I ask my Pops about his homecoming and what it was like to leave his homeland as a child and return as a man—with an American girlfriend.

Nereya Otieno for Okayafrica: What was it like for you to be going back? Did you have any expectations?

James Otieno: Well, it had been a while. I left in ‘71 and this is the first trip back since then. The purpose of the trip was actually twofold. One was to go see relatives that I hadn’t seen for quite some time and the other was to introduce your mom to my family.

Were they pretty surprised at how light she was?

Yes. Some of them thought she was a ghost, especially the kids. I think when we went to my cousin Eric’s family’s place, Linda [his young daughter] thought she was a witch. [Laughs] Because she was very light and yes they had seen some light people but not…well…not like her.

There was no hesitation about mixing and threatening the strong, honest Kenyan bloodline?

Well, there was that. A bit from my mom. Without my knowledge she had spoken to a few of the relatives to try and encourage me to see the ‘error of my ways’ and select some Kenyan woman. But since then, I think my mother has been quite accepting, once she realized this wasn’t just a good friend.

One thing about you is that you identify as someone who is Kenyan, but living elsewhere. To experience it again after being a Kenyan elsewhere, was there anything about home you found jarring?

Not really. If anything I had a greater appreciation of the culture. Especially the extended-family concept that truly is an extended family. Cousins treat you the same way they would treat a biological brother or sister. Aunts and uncles treat you as if you’re their child. I had missed that.

I think the stark contrast to most countries I notice, in particular African and Asian countries, is the difference in respect the youth give to the elders as opposed to how it is here. So that was refreshing to still see that over there. But what was even more refreshing was how welcomed we were. There was happiness. We would go from place to place — like your grandmother’s home in Nyahera to Karateng — with an entourage of cousins and there would be a feast.

So there were no thoughts about ‘I want to move back here?’

There were times we talked about it but the discussions didn’t turn out to be serious. But I certainly wanted to make sure I continued a connection there and would be going back and forth. I knew that once I started a career it would be much more difficult to find the time — extended time — to go there and see family and do all sorts of things. So, that’s why that trip was important.

As you can see I wore my Mombasa shirt to the airport. I think I still have it somewhere. Not sure if I can fit it anymore, but maybe. Maybe.