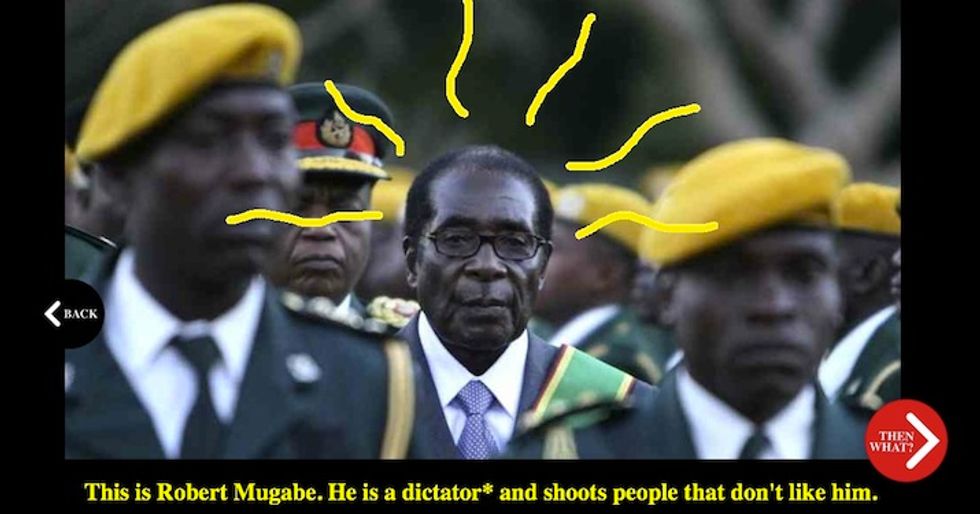 Notoriously controversial Russian artist Petro Wodkins was invited by Robert Mugabe's yes men to the 2014 Harare Festival of the Arts, and then promptly uninvited when they saw the nature of his work. Wodkins offended the Harare Festival officials with a golden statue of himself – which he wanted to offer to Mugabe – and a rap song entitled "My Gift to Robert." Given Mugabe's strong liking for gold (see: MTV Cribs-worthy bedroom) it seems odd that Mugabe– who Wodkins likens to a dictator– declined the gift. Ignoring Mugabe's rejection of his humble offering, Wodkins flew over to Harare, erected the statue of himself (Wodkins) and blasted his makeshift Mugabe "ode" (or absurd protest) to a group of seemingly enthusiastic Zimbabweans. Though some may agree lyrics like "I'm bad for my country, but good for myself" and "My name is Mugabe my face top five, if don't agree I'll burn you alive," summarise Mugabe's complex political strategy, ultimately they explain why Wodkins was allegedly chased out of Harare by Mugabe's officials soon after. Find Wodkins' version of the events over here, and catch the music video to "My Gift to Robert" below.