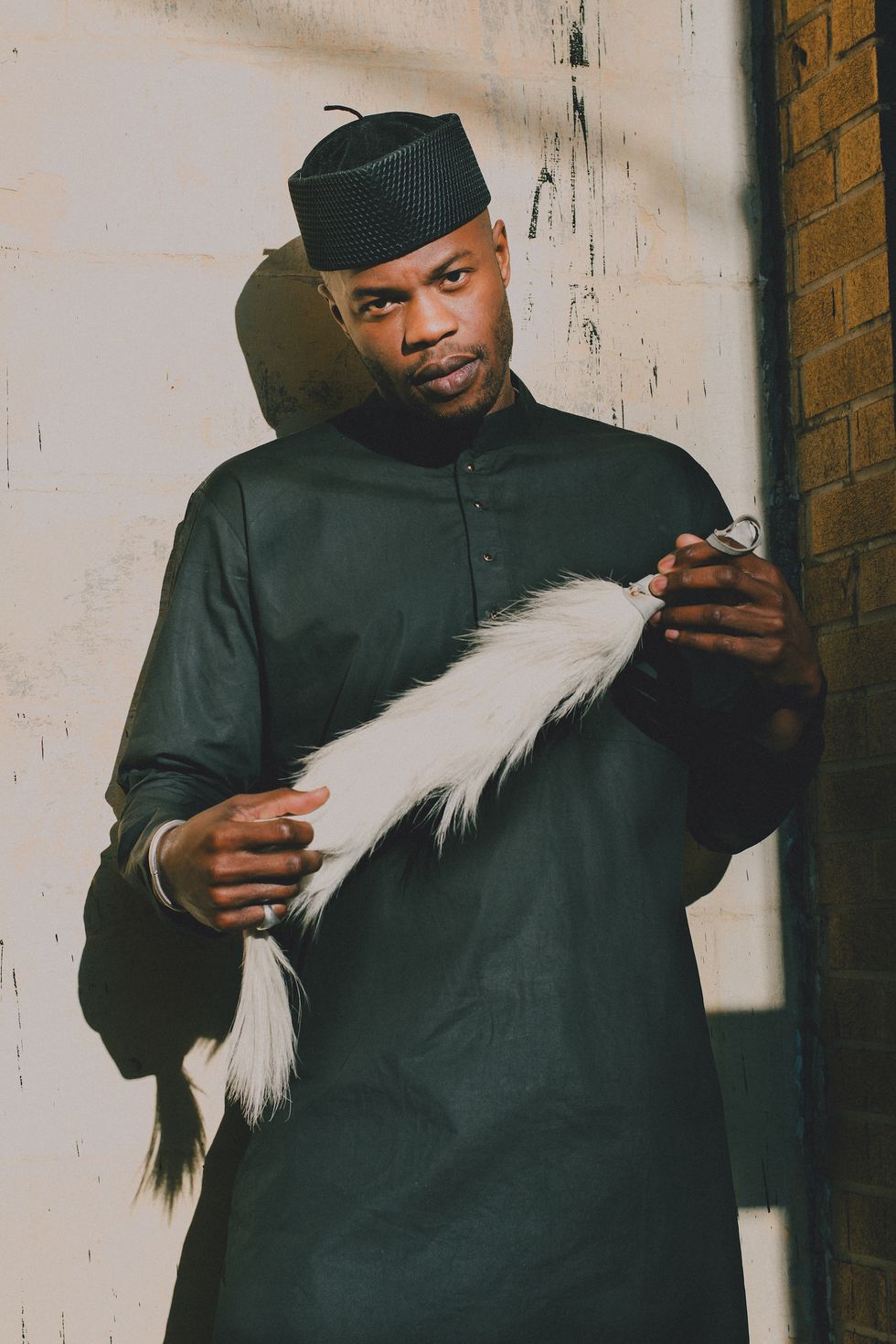 We sit down to learn the come-up of "Dynasty's" Nigerian-American star.

It's not everyday you hear Yoruba spoken on mainstream television—you can thank Sam Adegoke for that.

The Nigerian-American actor plays Jeff Colby, who originally was played by a white man, on The CW's Dynasty—a show based on Aaron Spelling's 1980s classic soap opera that eventually rose to be America's number one show. The re-up of Dynasty shows heiress Fallon Carrington (Elizabeth Gillies) not happy to discover her billionaire father Blake (Grant Show) engaged to Cristal (Nathalie Kelley), a rival employee at the family company. When Fallon's scheme to break them up backfired, costing her a promotion, she links up with her father's nemesis and former employee Jeff (Adegoke) and strikes out on her own. And that's only a nugget of the drama that's been brewing since the show aired last fall.

Having the reboot be set in Atlanta instead of Colorado sparked an idea that Adegoke eventually pitched to the network. Acknowledging the sizable population of Nigerians in the city, he insisted his character and the Colby family hail from the most populous country on the continent. "Jeff, my character, is like this self-made tech billionaire. He's like a Mark Zuckerberg," he told them. "Could he be Nigerian? 'Cause that's realistic." Dynasty's showrunner Sally Patrick took a liking to his pitch.

Adegoke wanted to engage another audience, especially through the fashion his character dons on the show as well as the storyline. "They hadn't cast my father at the time, and they ended up casting Hakeem Kae-Kazim, who's Yoruba as well, as Cecil Colby" he explains. "Episode nine is where we first meet his character. And prior to this, I'd done six episodes without [Jeff] being Nigerian. In the first scene we did [together], part of the scene was in Yoruba—which was amazing."

He notes after doing his homework, this has never been done on a major broadcast television show—where we see this lingual and cultural interaction—versus the quintessential Boko Haram/conflict narrative seen in feature films. "The Nigerian community went crazy," he tells me. "I got all these DM's and tweets and just realizing how impactful that was. I was overwhelmed at how I got to bring my culture into this character and make it mine." At the time we spoke, the network was in the midst of shooting episode 18—and the interplay and exchange was (and is) still happening. Pulling from his experience of seeing his parents code switch between English and Yoruba, especially when they were angry, had to be woven into the heightened scenes on the show.

It was a gloomy February day when Adegoke and I sit down to chat. He was taking a brief break from shooting Dynasty to attend New York Fashion Week—as he's a fashion aficionado who dabbles in design himself. His tall, slim stature isn't intimidating, but rather a canvas for his minimal, yet experimental, outfit of the day. Using black as a base, he rocks a burnt orange suit from Japanese designer Prospective Flow with a solid-black cap and off-white sneakers to highlight his rope belt. Once we both realize we're the youngest of our siblings (he's the last of seven), how he moves in the world makes complete sense. He's a creative bubble waiting to burst; full of nuanced stories he's ready to tell. But it took him going down a curvy path of doing everything but what he was meant—or called—to do.

"Fearlessly pursue what sets your soul on fire."

Growing up in Minnesota, Adegoke's first go at acting started in the church. His parents were ministers; he recalls being in church seven days a week. "Being the son of a minister, you're going to be involved in church one way or another," he says. "We would act out every story in the bible or plays that were biblically and spiritually inspired. And I was always the unsavory characters. I always played Barabbas, or Judas Iscariot." When asked why he was set up like that, he responds, "I'm a bit mischievous [he saved up and brought home a motorcycle against his parents' wishes at 17, but luckily his dad didn't flip out], but I just remember loving the interaction and the make-believe—and that never left me. But I really didn't have that option to do that." As many Nigerians and Africans deal with studying and pursuing skills in lucrative fields because of pressure and parents' fear of their children facing financial instability, Adegoke ran track and studied marketing and finance at the University of Minnesota.

"I was involved in everything except what my calling was," he explains. "I was president of the Black Student Union, vice-president in my fraternity, I served in student government, I did internships—I had a great GPA and had two job offers waiting for me by the time I graduated. I was living the life I thought I was supposed to and jumped into corporate."

Adegoke worked at Target's headquarters before moving to Los Angeles to work at General Mills. "I worked in multicultural marketing, which was really cool, he says. "It was as creative as I could be in a corporate environment without being an artist externally. I found out very quickly I would be miserable at this, so I cashed out my 401K and went to San Francisco to study menswear at the Academy of Art." While at the Academy, he took on a minor in theater which was unknown to anyone. "I had to be undercover with this," Adegoke says. "Menswear was also something I was really interested in doing, but it was still me lying to myself. The idea of moving to L.A. and being an actor just sounded so cliché. It sounded disgusting to me—why would you go into this rat race of a pipe dream that for so many people it doesn't work out?" Once he finished his studies, he created a biker-inspired collection and even collaborated with Chid Liberty's made-in-Africa apparel company, Liberty and Justice—but something was still holding him back.

That fear was knocked out of him once he tragically lost his best friend in L.A. to suicide in 2012. "It was then I honestly asked myself, 'What the hell am I doing?' I'd never been faced with my own mortality in such a palpable way," he recalls. Adegoke then kicked the grind of acting into high gear, making his moves in silence. "I started jumping into every class I could—I was a weekend warrior," he says. Despite returning to the corporate world during the week, he made himself available to act in student projects at USC and UCLA just to learn and grow. The more Adegoke immersed himself into his true craft, the more he discovered his truth of pursuing this outside of the quintessential goal of fame. "For black men, especially as Africans, you're not really encouraged to face emotions—you're taught that's a sign of weakness," he says, referencing seeing his father express his emotions on polarizing extremes. "I found acting to be a safe space for me—to explore emotions on a spectrum."

Three years later, his first big break came to be when he won the ABC Discovers Digital Talent Competition. "Yes, 2015 is when I begin to exist [on the internet]," he jokes. "It's a phenomenal program geared towards diversity and inclusion where they search for diverse storytellers. They get 15,000 applications a year and I entered not thinking anything of it—but I kept making it to the next round." This opportunity yielded Adegoke his first talent rep and his acting career took off, landing roles on Wicked City, Murder in the First and Switched at Birth.

Although Adegoke is riding the waves of Dynasty's success and flexing on the 'gram with his dapper fashions, the silent moves continue behind the screen. "There are a lot more stories that I want to tell—more from the African perspective. So I'm writing a lot," he says. "I just want to tell that immigrant story that's not comedic and comes from a space for those who didn't come from wealth and struggled with the pressures that came with assimilating. I have a very vivid memory from my childhood with those experiences."

As we dread for our conversation to end, Adegoke leaves with some gems we can all keep in our back pockets. "Fearlessly pursue what sets your soul on fire," he says. "[Once] you do that, you're in alignment. You'll be walking with purpose. I promise you—do the work; the stars will align. There's opportunity and there's voice and there's a place for you. Don't trivialize or diminish that for anyone. Listen to your gut—it'll never steer you wrong."