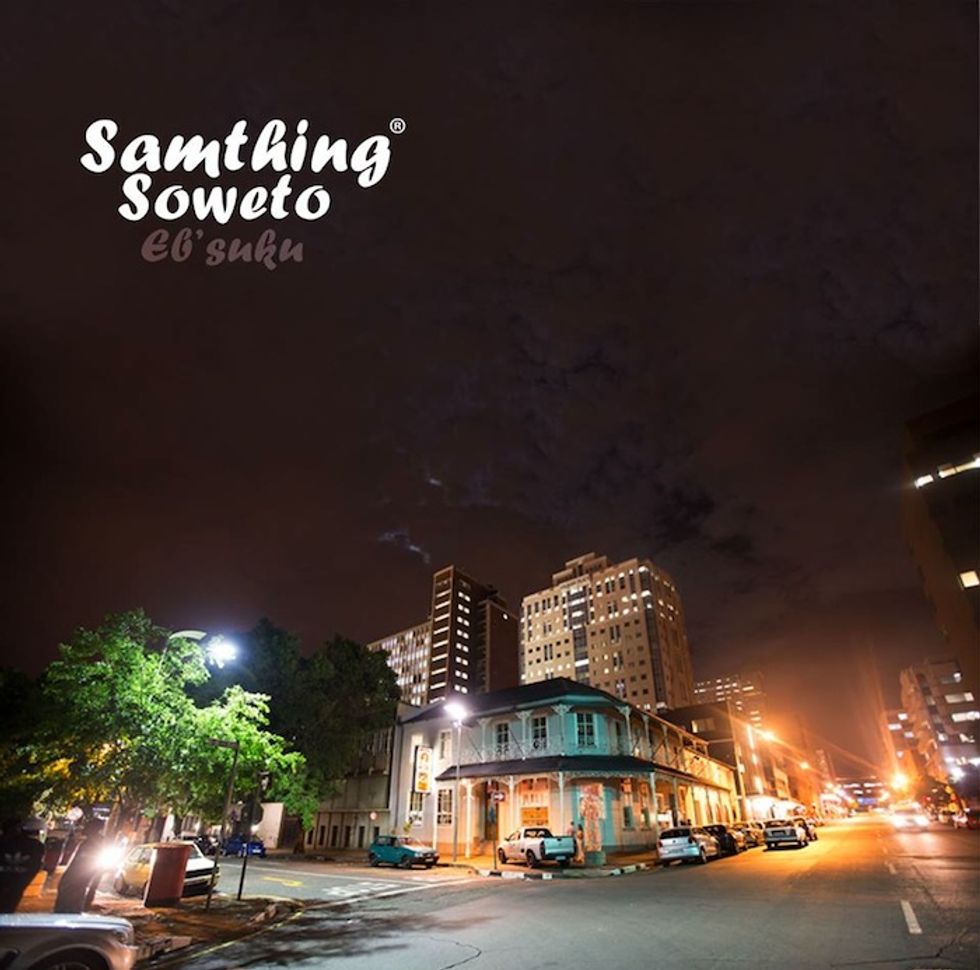 Okayafrica caught up with Samthing Soweto in the lead-up to his first solo EP 'Eb’suku.'

The falsetto singing third of South Africa's incredibly talented afrojazz band The Fridge, Samkelo Mdolombo aka Samthing Soweto, has released his first solo EP Eb'suku (meaning “the night"). Though folks might be apt to idolize this bright young artist, Sam insists he's just a man– which makes his introspective EP which covers everything from unrequited love, fandom, drugs and making music all the more relatable. We caught up with Sam to chat his debut solo effort along with a cappella, collaborating with Tumi, and more. Listen to Eb'suku below and keep reading to find out what's good with Samthing Soweto!

Shiba for OKA: Tell us about yourself and the persona that is Samthing Soweto.

Samthing Soweto: Well, I'm an average Joe really… who fears the dark, loves attention from certain types of people, hates being a nuisance. I have hopes and dreams like everyone else. I try to realise them like any other person. I have stresses about debt like everyone. I have certain responsibilities to my friends, good or bad... I'm just a dude... Like many other random dudes across the world, but unlike any other dude I know, I have an exceptional ability to project my voice into any emotional setting as I please, making me the first African super hero since The Black Panther. In simple terms I use my voice to compose a changing and interesting array of songs that aim to please the young and old. Samthing Soweto is the platform I use to exhibit these art works.

OKA: What about a capella speaks to you?

Sam: Ehh... I don't know, I make a cappella music because it's a convenient way for me to make music right now... As an artist I have this remarkable edge to create new sounds but my imagination doesn't understand the concept of budget and other things that are required to pull off great and amazing musical works, so a cappella is where I can get lost in the music... For now.

OKA: We've heard all about the controversy with you leaving The Soil, going solo and joining The Fridge with Adey and Thusi, as well as collaborating with all sorts of creative powerhouses like Kabomo, Tumi and the like. Your track with Tumi, "Broke People," is pretty great. Tell us about the making of that track and the message behind it, for those who might have missed out.

Sam: Tumi called me randomly one morning and said he had something for me to check out at his studio, so I took a taxi to the city, and got to his studio in Bramley. When I got there he played me some love song and he told me he needed a chorus on the song. I liked the song he played back for me but I was in a place in my life where I wasn't trying to make those types of love songs, so I somewhat mumbled my discomfort with appearing on songs that really didn't mean anything to me at the time… And Tumi being the big brother he is, kinda laughed at me and said "Yo so what you wanna do then Sam?" I said I wanted to do a song that spoke to the people, something that spoke about our lives right now, he just sat there, listened to me, laughed at me again then played the song "Broke People" with his verses already on the song. It took a few hours making sense of the chorus on my notepad and the verse that I wrote, and like they say, the rest is history.

OKA: This is your first EP as a solo artist, and as you said on bandcamp, this one tells of your musical journey. Take us through it track by track… Who are some of the voices we're hearing on the EP, for example in Ndofire/Skado? Who is this woman you speak of on "Kwamampela?" Details!

Sam: It took around the whole year making that EP. Each song on the EP probably has five or six versions. I had to change certain things about the music with every season of the year. I make seasonal music, so as the seasons change, I feel the need to change the music... so I felt I had to make the music reflect on something that changed always but was constant long enough for me not to feel the need to change it (laughs) and that's when Eb'suku (meaning 'the night') came to my rescue. Since I was spending a lot of time chilling in the city of Johannesburg at night, I kinda used the general vibe I got from the city to build the versions that in my opinion, reflect it.

Well, I talk about a girl, a beautiful girl that needs to understand that my feelings for her are for real hence the title "kwamampela," an informal Zulu word that means "for real" in English.

Well, this is one self explanatory. It's a public announcement for people who call themselves fans of anything I've done in the music. It's also a play on some people's beliefs that someone who does what I do needs to take drugs to be as creative... Which is kinda silly and sad if u think about it.

This song is a play on relationships I don't like explaining this song much, I like hearing what people think the song is about... Plus it's in seSotho which makes it awesome... And there is no other person singing on all my songs but me. It's my EP right? (It's true, this guy has incredible range!)

My friend Thato's favourite song. It's a song about what music is to me and how I think I got into it as a kid, Mdolomba is also my surname.

Track 5: "I've Given Up" is about romantic love being sort of fictional in my opinion, but how love, real love is a real force that when we encounter it, it forces us to change our perspectives on life in general for many generations to come.

OKA: When you look back at some of the choices you made as a musician, as a man, how do you feel about what it took to get to creating and releasing Eb'suku? What did you have to give up? What did you gain?

Sam: I've always given up my time for my goals to come to pass and this is the only resource I value above anything else…

OKA: Let's talk about The Fridge. What is it that brought you three together and what keeps you together?

Sam: A love for music, a love for awesome songs. We're three peas in a pod!

OKA: What are you listening to at the moment?

Sam: The Brother Moves On: A New Myth, The Zuko Collective EP, and an album from a poet called Makhfula Vilakazi, a hookup from a friend.

Sam: I'm just happy to be what I am, an artist with dreams, hopes and a world of music to create. I'm reaching out for greatness, it takes time.