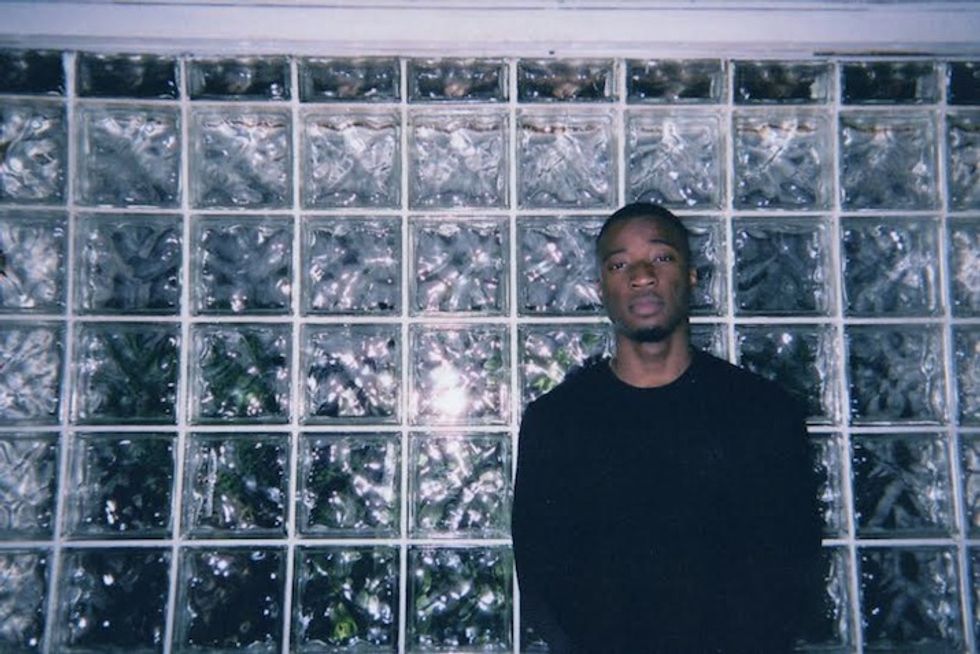 NYC-based artist Ayomide Kalejaiye produces music and sings under the moniker Saro, a name he chose to draw from the community of repatriated slaves from Brazil, Cuba, and Sierra Leone who settled across West Africa.

Saro, who describes his music as “Afro-Experimental pop," has produced much of his work thus far between New York and Lagos. His compositions aim to discern, deconstruct, and re-interpret the West African musical tradition and identity within a loose, unconventional pop framework, and combine the emotional experiences of heartache, faith, redemption and an eventual journey home.

At his apartment in New York City, we delved into Saro's start as a producer and vocalist, and what he was hoping to achieve with his latest project, a self-titled 5-track introduction to "afro-experimental pop."

Sheba Anyanwu for Okayafrica: Why the name Saro?

Saro: Saro is a name which was initially influenced by the subset of the Yoruba tribe called Saro. I was inspired by the idea of returning home, returning to the culture, the realities of going to school outside Nigeria, and being away from what is familiar.

Okayafrica: What is "afro-experimental pop?" Would you say afrobeat, or even Nigerian music on a more micro-level is starting to sound the same?

Saro: I think of "afro-experimental pop" as music that came from what I really wanted to hear. I will say that there is kind of a void, and the music came from my own way of filling that. It’s not that the music in Nigeria isn’t good. The music is great and there are a lot of amazing musicians in Nigeria. It is a result of me creating something that was aligned with my own cultural identity; music I feel is progressive and challenging. I love a lot of Nigerian music, but I wanted to sort of marry what was important to me with what I know, and produce my own sound. The music that came out of Africa in the 60’s and 70’s is also very inspirational, and I think it is important for us to try to distil and recreate something new. I think that period was very innovative with the risks they were taking in creating sound. With the comeback of afrobeat and highlife, my only concern is that there may be a cheapening of the sound to just create music for the sake of hits.

Okayafrica: Take us through your tracklist and what the experience was like creating certain tracks.

Saro: Generally speaking, the ideas behind the songs are in chronological order, and they express what I was feeling in different instances of time. The creation process was very in the mood, very in the moment. In those moments in time, I felt I wanted to really express something. I think if anything, it was less deliberate and seeing how everything ties together, it had to do with seeing the things I had experienced in the past years in terms of relationships with people, with personal struggles, with feelings of loss, with feelings of redemption at the same time and even faith.

Okayafrica: Loss and redemption seem like opposing feelings, which could create emotional friction, right? How do you make sense of that through the music? How do you translate that emotion?

Saro: I think that comes from being able to recreate feelings, and I think that comes from the friction produced from contrasting emotions. I juxtapose the tension I feel, it’s in the lyrics, it’s in the harmony, and it’s just the actual fabric of the music. It’s not necessarily writing about the emotion as much as it is communicating the energy. The lyrics are essentially what I am going through. It's just a series of emotions or a mind state I’m going through.

Okayafrica: Do you think emotion holds a strong place in Nigerian music? Or is there an absence of emotion in the quality of music Nigeria exports globally– not to limit you to the Nigerian music industry, but what are your thoughts on that?

Saro: Yeah, I think it’s a little bit superficial, but that’s not necessarily a function of Nigerian music, maybe just a function that it is very pop, and pop in the sense of mainstream pop music. So I would say yeah a lot of it is very superficial or doesn’t necessarily go as deep into emotion, or expressing complex ideas or complex feelings, and I think that is what is refreshing about this project. I’m happy that it’s different in that way. We are complex people, and we should be able to communicate that, we should be able to talk about that. I think sometimes I listen to music and it’s like you can escape from something, but there is definitely a place in music that is for emotional connection, that is, emotionally engaging and steeping yourself into the work.

Okayafrica: How did you want listeners to engage with your music and your latest project?

Saro: It’s not so clear for me on how people should receive it now, but I hope for it to be a cumulative experience with live performance and visuals. Not to sound grandiose, I wanted it to be clean and just throw my project in one place, which is why I threw it all out there online. It will be clear in kind of project that is cohesive. I intend to keep building on it on that space. I wouldn’t know until more people give feedback on what the experience is like for them.

Okayafrica: Do you feel there will be a challenge in engaging with Nigerians in Nigeria?

Saro: I think so, just partly because we’ve kind of been conditioned a little bit. It will be a challenge but to an extent people want to hear something that is a little different, so I’m also positive about it’s reception.

Okayafrica: Do the books or texts you have engaged with find their way into your music? What is some of the written text that has been influential or meditative for you? What has helped to contribute your work?

Saro: One text I read, I was reading this biography of Ai Weiwei, it’s this book called Hanging Man: The Arrest of Ai Weiwei, kind of an autobiography of Ai Weiwei. It’s about dismantling and transforming traditions. I think my initial interactions with certain texts like plays by Wole Soyinka is luck or faith, or just generally trying to discover or wanting to really understand or discover myself, and by extension what is at the core of being Africa, being Nigerian or being Yoruba. As far as culture, I wish I knew more about Yoruba culture and art. There is so much expression in the things that are found in the morals or the ways of our people. I definitely do think my faith has played a huge role in my music. I’ve come to believe that music is a very spiritual thing. I’m trying to actively understand how my soul is connected to the world and how that connection affects me.

Okayafrica: Any last words you would like to highlight for us?

Saro: I just want to touch on again the use of the word experimental, the process has been uncharted for me, I’m just feeling things out, feeling what works; seeing what feels right; that process has been part of my personal development; a larger type of cultural development; its something emerging in our generation which is a higher sensitivity towards creative ventures; and that’s something I want to be a part and advocate of, and it’s what I hope the significance of my music would be.