AFRICA IN YOUR EARBUDS #23: SAUL WILLIAMS

Download a personal and eclectic Africa In Your Earbuds mixtape from Saul Williams. 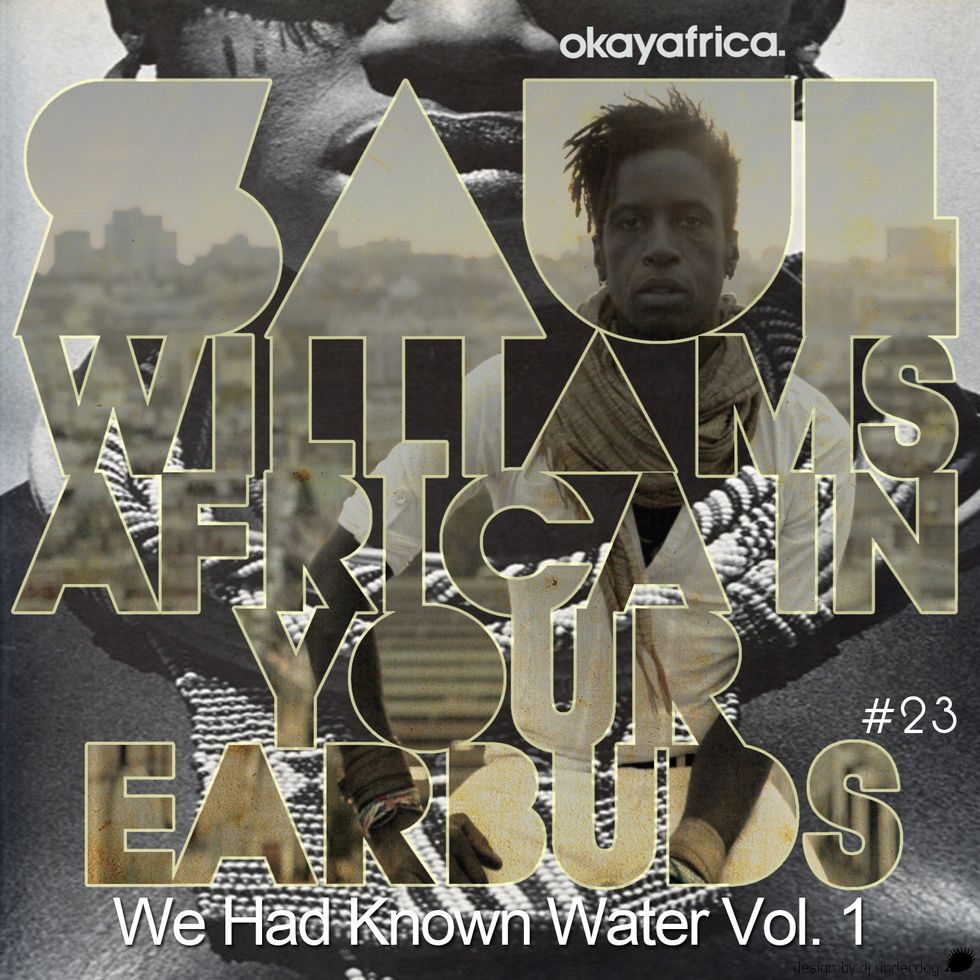 Saul Williams is at a point where he can reflect on over a decade of impassioned contributions to the many "mediums" he works in — from open-mic escapades with the Nuyorican Poets to writing/starring in Slam, to albums alongside Rick Rubin and Trent Reznor and collaborations with Nas, Erykah, and The Roots. For AIYE #23, Saul guides us through a personal and eclectic diaspora mixtape. Far better with the pen, we opted to include Saul's full explanation of the mix, which is interspersed with vivid recollections of his own introduction to African music.

My relationship with indigenous African music, in it's most direct/un-abstract sense, begins with Fela Kuti. I was 18 years old, freshman week at Morehouse College, at a club called The Masquerade to hear DJ Disciple. It was around 2AM and I was headed towards the door. The song that came on was "Hot Music" by Soho. I convinced my friends to wait while I danced wildly by the speaker nearest the door. My mother was rushed from a James Brown concert on the night of my birth and anything James Brown related, whether by sample or nature, can usually get me kicking. Of course, the main sample in that song is from a Wynton Marselis song that I discovered months later (I fell asleep listening to the vinyl and it woke me from my dream ... but this isn't about that).

Just as the song was ending, horns and then more horns. It was the beginning of Fela's "Lady." To be honest, I didn't know what the fuck I was listening to at that point but my friends were dancing wildly too, and it was clear, there was no way we could leave. After more horns and more horns and more horns and more horns, Fela started singing. My man Scott, our bear-like leader, was better cultivated than I. He read the look on my face and stated, “It's Fela.” I was in Tower Records the next day and the math from then 'til now doesn't quite add up. I think I may have put in enough hours to have earned a doctorate (or a few wives, depending on how close you're listening) ... Anywayze, since then I've descended down the mountainous top of Afro-Pop into the volcanic mist of indigenous hoo-ha and, at present, these are some of my favorites, coupled with some of my most precious discoveries.

The title comes from Dr. Martin Luther King's "I've Been To The Mountaintop" speech which I used in a composition where I sampled the Mauritanian griot in "Beyt Bieh." Dr. King is explaining why fire hoses didn't work against us during the Civil Rights struggle saying that the police didn't realize that we had [burning in us] a certain kind of fire that no water could put out. Then he quips, “We had known water,” which, to me, seemed to be an allusion to the Middle Passage of the trans-Atlantic slave trade. I've included the raw composition along with the Mauritanian source as a sort of bridge between my diasporic reality and the African continent.

In fact, I guess it's fair to say that my mix begins with a tribute to the middle passage. The first song is a song that has inspired me for years that was written by the South African Miriam Makeba and sung by Nina Simone. It's followed by "Beyt Bieh" and my tribute to both, those who withstood and those who could not stand the harsh conditions of the voyage from there to here (and now there again) before we arrive in the Congo with one of my favorite groups, The Kasai Allstars. From there we travel from field recordings to studio recordings thru an eclectic mix of songs, chants, and prayers that I'm excited to share. It's not particularly a dance mix- — a bit too moody and eclectic for that. But if you got a glass of wine, well, hold it up. And if you're interested in a volume 2, let me know in the comment section below.

Saul's upcoming book CHORUS: A Literary Mixtape will be available Sept. 4. Catch him on his CHORUS Spoken Word Tour across North America starting in August. Grab tickets and see the full dates. Download AIYE #23: We Had Known Water Vol. 1 below! Thanks to Underdog for the cover artwork.

AFRICA IN YOUR EARBUDS #23: SAUL WILLIAMS - 'WE HAD KNOWN WATER VOL. 1' by Okayafrica on Mixcloud

"We Had Known Water" Saul Williams

"Forgive Us All" Rob (Ghana)

GuiltyBeatz isn't a new name in the Ghanaian music scene. A casual music fan's first introduction to him would've likely been years ago on "Sample You," one of Mr Eazi's early breakout hits. However, he had scored his first major hit two years before that, in the Nigerian music space on Jesse Jagz' and Wizkid's 2013 hit "Bad Girl." In the years to come, the producer has gone on to craft productions for some of Ghana's most talented artists.

In the years to come, the producer has gone on to craft productions for some of Ghana's most talented artists, having worked with the likes of Efya, Pappy Kojo, Sarkodie, R2Bees, Stonebwoy, Bisa Kdei, Wande Coal, Moelogo and many more over the last decade. The biggest break of the talented producer's career, however, came with the arrival of his own single "Akwaaba".

In 2018, GuiltyBeatz shared "Akwaaba" under Mr Eazi's Banku Music imprint, shortly afterwards the song and its accompanying dance went viral. The track and dance graced party floors, music & dance videos, and even church auditoriums all around the world, instantly making him one of Africa's most influential producers. Awards, nominations, and festival bookings followed the huge success of "Akwaaba." Then, exactly a year later, the biggest highlight of his career so far would arrive: three production credits on Beyoncé's album The Lion King: The Gift.