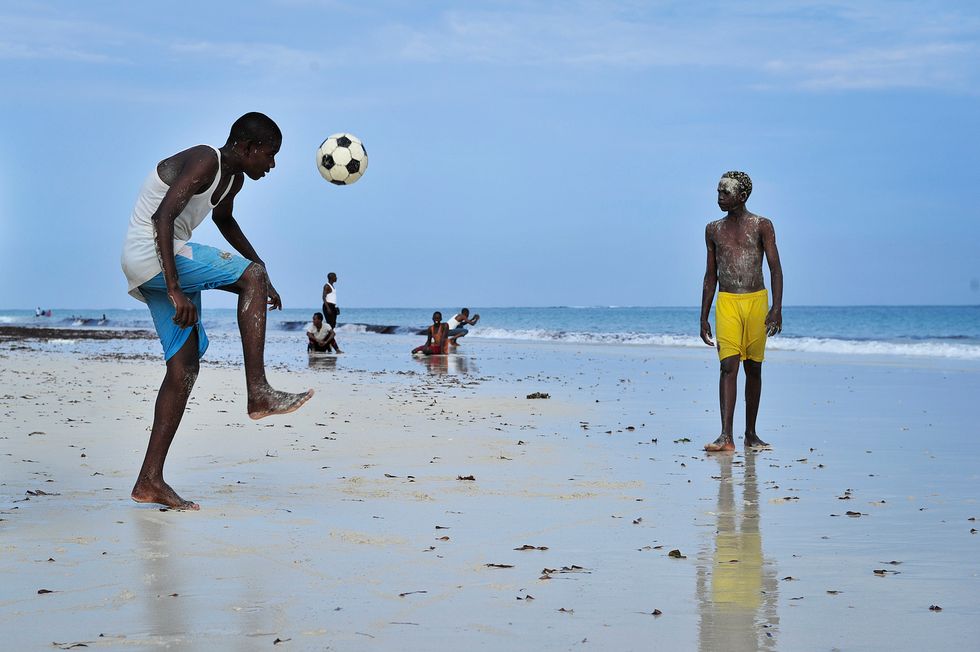 Soccer is all over African literature, but here are some of the most interesting scenes by African writers.

When France was playing Belgium in the semi-finals, I received a message from my mother on Whatsapp. It was a video of my father, sister, and brother eating dinner in Harare while watching the game. They looked more alike than I've ever seen them as they managed to eat without looking down at their plates. It was a scene like many others this summer, soccer seeping into daily routines and routines shifting to accommodate the game.

Since literature often reflects the intimate details of our lives, it's no surprise that soccer is scattered all over African literature. This list gathers a few of these scenes from various genres including memoir, fiction, and twitter performance pieces. Soccer doesn't feature prominently in most of these stories, but these writers use the game to create moments that enhance the narrative.

Like most coming of age memoirs, Binyavanga Wainana explores uncertainty about the body, place, and identity. "I still do not know why everybody seems to know what they are doing and why they are doing it," he writes. To explore this uncertainty, Wainana begins with questioning the most certain thing in his world—soccer. Wainana later writes that soccer is not negotiable in ways that "democracy," "wombs of women," or the "lives of citizens" seem to be. It has never been successfully banned in Africa. The memoir opens with a poetic soccer scene that ends in pages of fascinating philosophical musings about re-discovering the body through the simple act of drinking a glass of water. Read a small part of the scene below:

She twists past Jimmy, the ball ahead of her feet, heading for me. I am ready. I am sharp, and springy. I am waiting for the ball. Jimmy runs to intercept her; they tangle and pant. A few moments ago the sun was one single white beam. Now it has fallen into the trees. All over the garden there are a thousand tiny suns, poking through gaps, all of them spherical, all of them shooting thousands of beams. The beams fall onto branches and leaves and splinter into thousands of smaller perfect suns.

The Trial of Christopher Okigbo (1971) By Ali Mazrui

When scholars are mourning, they write strange novels. After Christopher Okigbo and Mohamed Said died, Ali Mazrui chose to fictionalize his pain by imagining a continental "after-world" where Okigbo is on trial for choosing politics over art and dying in the Biafra War. In the middle of the book, there is a random soccer scene. The sport has captured the imagination of the inhabitants of this world including those who died before it was invented. The "Sporting Association of After-Africa" holds a tournament for teams representing different centuries and to simplify the problem of uniforms the teams play naked. Let's just say it's the most bizarre soccer scene in African Literature. Get a glimpse of it below:

Members of the Eleventh Century stood in their positions, from the goalkeeper to the center forward, awaiting the challengers. Hamisi, who had been startled when they first appeared, remained intrigued by the fact that the whole team was stark naked but for a girdle of beads around the waist of each player. Again there was a majesty in those eleven black bodies standing erect and proud in the afternoon sun, the center forward with his foot on the ball at the centre of the stadium, awaiting the competitors.

Shebeen Tales: Messages From Harare is a book of short essays where Chenjerai Hove reflects on post-indipendance life as black people struggle to respond to a city that was designed for work and profit. As the title implies, most of the essays explore the Shebeen and the ways that alcohol offers people in Harare an escape from confronting the emotional disappointment of post-independence life. In an essay titled "Marengenya: Tipsy, Dead Drunk, or Having a Head," Hove describes how beer and soccer are combined to create a leisure culture for old men in the city. Read a small part below:

Since independence in 1980 a new leisure invention has arrived. Zimbabweans love their soccer no matter what. But the ageing players, those who played in school long back, are too old or busy for competitive soccer. They now run what are called 'boozers' clubs' whose main mission is to break all the soccer rules. First, there are 30 players instead of the normal 22. And for first aid the injured are treated to mugs of beer. Any player-boozer who feels his throat itching for 'booze' simply walks away to drink in the dust.

Arinze Ifeakandu's story begins at a soccer match where a spectator called Kamsi becomes the protagonist's love interest —"He was not a player, he was too small to be one, even though you knew that bigness wasn't the stuff anyway." Throughout this love story the stadium becomes a setting that the protagonist nostalgically returns to as the relationship falls apart. Unlike Wainana's memoir that implicitly deals with queer desire, this story foregrounds it. Ideas of sexual desire, masculinity, and gay identity are thought through in relation to the figure of a soccer player as Kamsi always appears in the story wearing his Arsenal jersey.

The next day was Saturday. The girls from your department had a football match with the girls from his. The match was already on when you came, and you walked straight to him after shaking hands with your friends. He folded his arms across his chest, smiled so widely it made you happy simply standing there, saying, How'veyoubeenbro? You sat with him on the racing track. He was wearing three-quarter shorts and an Arsenal jersey, the hair on his legs and arms black and curly against the light brown of his skin.

"We live in different time zones, out of sync but aware of each other. Then the game begins and we enter the same time: the time of the game," Teju Coletweeted in 2014. In Cole's twitter piece "Time of the Game," he aks his followers to tweet a picture while watching Germany play Argentina in the 2014 World Cup final. Giving instructions to create a cohesive narrative he says, "The screen doesn't have to be legible. But the caption should be true to the match clock at the moment you took the photo."

Game time marks the chronology of story, but the most interesting scenes are outside of the match. Cole asks his followers to include the wall, the door, the window, the room or other frames surrounding the screen. In many of the photos, the match fades into the background, and the clearest images are the interior of people's home (sharpies, chairs, wine bottles, DVD's ect). Reflecting on the piece Cole said, " I liked all the photos, even the bad ones. There were a lot of photos with people's feet in them. So many of them were completely unguarded insights into the lives of others, and all these strange formal elements started to coalesce around the images."