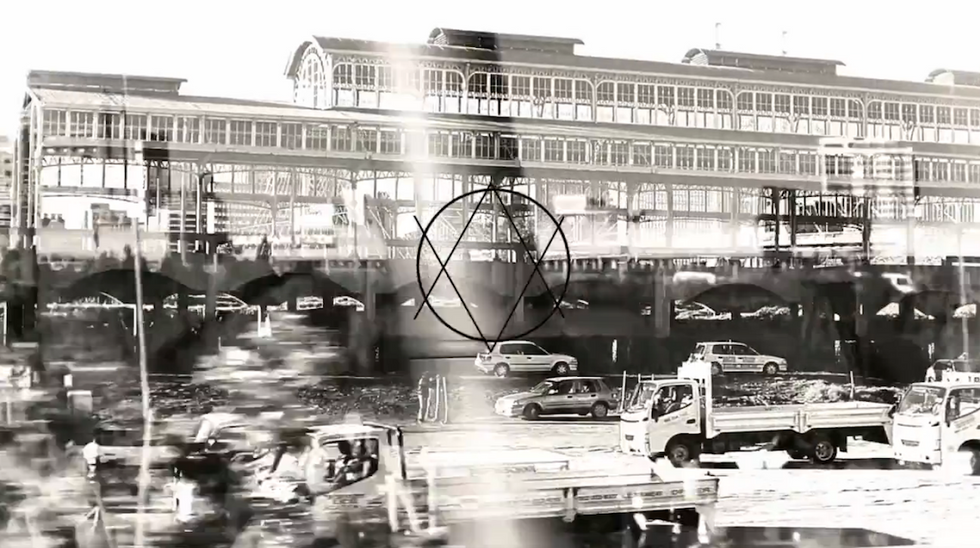 Johannesburg-based DJ/producer and visual artist Tshego Nyatlo is a young man of many talents and just as many ways in which to express them. You may recognize the gritty sounds of Cape Town’s Sedge Warbler for which Nyatlo dons the rapper cap as the opinionated, fierce, and dark Vulkan Cydeburner. Nyatlo returns off the back of his Victimless Dimes EP with a new lesson in teaching the ear to see, this time as producer Micr.pluto on his latest release "Particle Fields."

Shiba for OKA: Micr.Pluto? Vulkan Cydeburner? Tshego... tell us about your so-called personas and how they differ creatively.

Micr.pluto: This makes me feel schizo. Anyway, Vulkan expresses himself solely through rap music... Its more of an outspoken and maybe forthcoming personality, as opposed to Micr.pluto. I would say in terms of opinions and views its something shared, but expressed differently. Micr.pluto is a more chilled character where thoughts and ideas are channelled directly through making music. Each character serves his own purpose. Vulkan provokes thoughts and shares perspective on everything (relevant or irrelevant) whereas Micr.pluto gives more of an experience without having to justify it. The 2 characters relate to me in the sense that creating music and listening to it is something I have engaged for the longest time... it's almost fundamental to me. So it’s never a thing of feeling like I am stepping out of my own skin.

OKA: So what is it that ties them together?

MP: The characters came about very subconsciously and spontaneously. I am pretty intrigued by space and I think that’s primarily where the whole concept of “Pluto” stems from and obviously “Vulkan” being the embodiment of the sun. The idea is to express subconscious concept and also to create my own interpretations of what space would sound like if we could grasp every frequency of sound out there... the results aren’t always satisfactory!

OKA: You’ve worked with many of the South African electronic scenesters before, such as ex-PHfat’s Marc Potgieter as Sedge Warbler on Basil Pesto. Can you tell us what the scene is like in terms of shared creativity and what it’s like working in Cape Town, Pretoria and Joburg respectively?

MP: The scenes are very different in that sense, for example in Cape Town there’s a very frequent and prominent flow of creativity, events and people who are willing to collaborate and make it happen. Also there isn’t a great level of discrimination towards new artists. Whereas in JHB and PTA there’s a limited amount people who are willing to take things to the “next level” and break the mediocrity , it’s been a thing of people leaning more towards the popular scenes than emerging ones. Having had shows in all 3 cities (rapping and DJ’ing) I have had the privilege of experiencing the different scenes and the diversity of them. It’s great to see the difference in the response to my music in the different cities. There are shows where just one person coming up to you to compliment you can make your night as opposed to a packed out crowd screaming at the top of their lungs at The Assembly. Such experiences humble you as an artist... On the brighter side I would say JHB is really opening up to new avenues and yearning something different on the scene, it’s really great being a part of and seeing it spawn into something amazing.

OKA: So let’s get down to business. Tell us about the making of this video…

MP: Noel Labridy and Fuzzy Sliperz take all the credit on that one. Creating the video was a process whereby I gave them the track and let them translate it into moving pictures. In a sense they crystallized my vision of the track.

OKA: The industrial feel of it is quite charged and full of a subtle kind of energy. Where was it shot?

MP: The video was shot in JHB CBD and follows the mundane scenes of the inner city bustle from angles we never look from in mundane reality. It is almost like having a very random and rapid tour of JHB with countless eyes and points of view. In terms of “Particle Fields” I think using the city was an angle which gave way to displaying something alive and massive as something formed by tiny contributors (“particles”) forming a bigger picture. In a sense that’s everything around us, if we really had to go into it.

OKA: Give us the grit on the rest of the album and what we can expect in the following months.

MP:Smoke Sculptures is a 7 track project which I have been working on for some time now. It’s an amalgamation of many influences from diverse genres (electronica, avant-garde jazz, hip hop, etc) and visual ideas. It mostly explores sound and was a platform for me to explore, learn and play with sound in a musical way. The use of digital sounds and samples of mechanical objects and machinery highlight the creators of pollution (i.e. “Smoke Sculptors”) and in that defines my approach to sound (noise pollution within harmony). Yet again that translates into more than the music and can be looked at from any angle.

'Smoke Sculptures' is due out in October. In the meantime watch the epically shot "Particle Fields" video above and catch Micr.pluto beat battling at STR.CRD and performing at One Love Heritage at Constitution Hill for SA Heritage day.