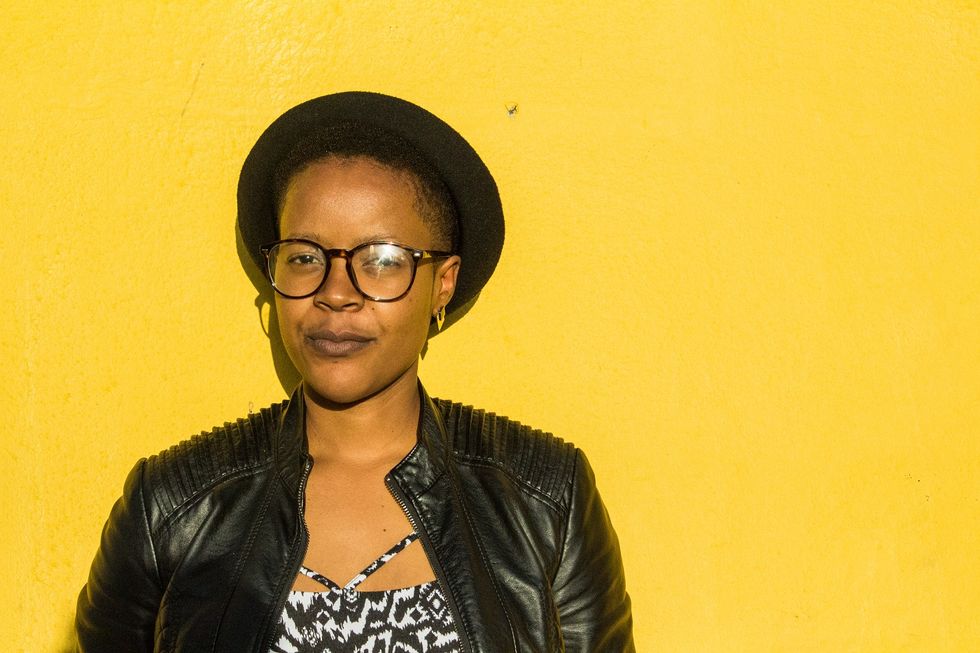 In October, 16 South African social entrepreneurs gathered in Langa, Cape Town, for Red Bull’s second Amaphiko Academy. Just like in the inaugural edition, held April 2014 in Soweto, each of the selected participants were deep in the throes of their own exciting ventures. All were chosen for their skill in making social change through their businesses. Three social entrepreneurs in particular caught our attention with their innovative projects. We profile them below.

Zimbabwean-born, South African-based graphic designer Ruramai Musekiwa has a smile that emits a hospitable aura. She believes she and all her fellow Africans are beautiful–they just don’t own their beauty. “What I think needs to be addressed in the African context is mindset,” she says in her presentation during the academy. “We need to get to a place where we all own our power, where we own our beauty, and I had just been pondering on this for a long time.”

Her attempt to change that? Sibahle – meaning “we are beautiful” – a series of illustrations of prominent African women that went viral earlier this year. Lupita Nyong’o tweeted that she was honored to be part of the series. “That meant a lot to me,” Musekiwa admits. Musekiwa studied graphic design but, due to financial and personal constraints, did not complete her diploma. “That’s a huge part of my journey,” she says. “I told myself that in spite of not having a qualification, I’m going to push myself to achieve things, even though in the back of my mind I had an insecurity about not having a qualification.”

When Musekiwa started the series she was just illustrating African women who inspired her personally. The great response on social media to the campaign indicated a need for African people to find a healthy sense of self, she says. Sibahle then evolved to a magazine, currently three issues in, documenting African women doing great things. It evolved further–Ruramai recently finished the first title in a children’s book series. It’s translated into five different African languages. “It’s modelled on collaboration,” she says. “On the very first one, Tshomo Ya Tiisetso, I worked with young up-and-coming illustrator Thabiso Moledi.”

All actress and TV presenter Cleopatra Simelane wanted was to create a magazine for high school students in South Africa. She’s achieved this and more with Recess. Now distributed to 200 schools and with a circulation of 11,000, Simelane’s free magazine has grown from a reliable source of information at high schools into a full apprenticeship program for students to tell their own stories and receive mentorship from industry professionals.

And the scope of Recess is changing. “Now it’s South Africa’s youth fitness revolution through content and activations,” a bubbly Simelane tells me. Fitness holds a special place in her heart. “In high school, I was depressed,” she says. “Fitness played a great role in my healing process. A lot of people still think fitness is a physical thing for me because I’ve never really spoken about why I started working out.”

Couch potatoes might know Simelane for her acting on such South African TV shows as Stokvel, Mtunzini.com, Rhythm City and as a presenter on Mzansi Insider. The latter gig she landed through her obsession with fitness. “Mzansi Insider picked me up from Instagram to do their fitness inserts,” she says. “I was supposed to be their guest fitness presenter but they liked my inserts so they kept me as their regular fitness presenter.”

The current issue of Recess is the last print issue before the magazine moves to the digital space. This means a shift in the business model. An avid lover of print, Simelane admits she has a hard time accepting the switch to digital and says it’s unfair to her readers because of South Africa’s soaring data costs. But she knows she has to adapt in the ever-evolving media industry without a publishing background.

Prototyping is how Simelane stays in touch with her audience. And she advises anyone willing to follow in her footsteps to do the same. “You need to prototype. Go out and find out if what you are trying to do is what people are looking for and find out how you can refine it to suit their needs better.” Even Simelane hasn’t stopped prototyping. “I still just stop in the middle of the road when I see students. And I chat them up, sometimes the outcome’s good, and other times it’s not.” Going forward, Simelane looks to expand Recess and strategize for the shift in business model. She also looks to do more film-acting and presenting.

Bushera Bashir relocated from Singapore to South Africa in 2012, leaving behind the safety of a corporate job as a consumer consultant to pursue her passion for non-profit entrepreneurship. To get a taste of the industry and earn her stripes, she volunteered at the Richard Branson Centre of Entrepreneurship in Johannesburg for six months and ended up staying on. “I was keen on moving to non-profit,” she says, “And I thought, ‘let me move to a country that’s been on the frontier of social innovation’. I did my research–there was South Africa, India and Brazil. I didn’t want to go to India and since I don’t speak Portuguese, I couldn’t go to Brazil. So South Africa was a natural choice because of the language.”

Bashir runs a South African-based brand that makes cashmere scarves with contemporary designs. Her Trebene label recently launched in Paris, the UK and the Netherlands. To produce the scarves, Bashir works with weaver communities in Kashmir, where she spent the first 15 years of her life. A portion of the business’ profits go towards the education of the weavers’ children. “We work very closely with the weaver communities,” Bashir tells me.

“I’ve also realized that the newer generation doesn’t want to do it [weaving] and it’s not because it’s an old craft but because it’s not sustainable,” she explains. “And it’s about giving those kids high quality education, and at the same time, they see the revival of the industry and I hope that inspires them to bring back innovation into the industry.” She says that if Trebene is run 30 years from now by someone who was part of the program and whose passion was invigorated by it, she would consider that an achievement.

Bashir’s business also aims to change perceptions about her birthplace. “The bigger purpose behind the brand is to change the narrative in Kashmir,” she says. “It’s like taking someone on a holiday to Kashmir without them actually going there. And sharing with them what the place really is about and celebrating the craftsmanship that comes from Kashmir because now the popular perception is the conflict. So it’s about changing that.”

As we speak, South Africa is going through interesting times, with students protesting against high varsity fees and the transformation of institutions. Bashir has been observing the country she now calls home. “I feel like South Africans in other areas [are] constantly harsh on themselves. Of course, there’s a long way to go, but I feel they’re constantly harsh about the issues of race,” she says. “But actually South Africa is taking that issue head on, they’re talking about it, they’re challenging it every day, they’re focusing on it. You have other established countries where there’s still racism and lots of other issues, but they’re swept under the carpet – no one is acknowledging them but South Africa’s doing that.”