South Africa's Most Prolific Rapper, YoungstaCPT, Is Taking It Back to Basics 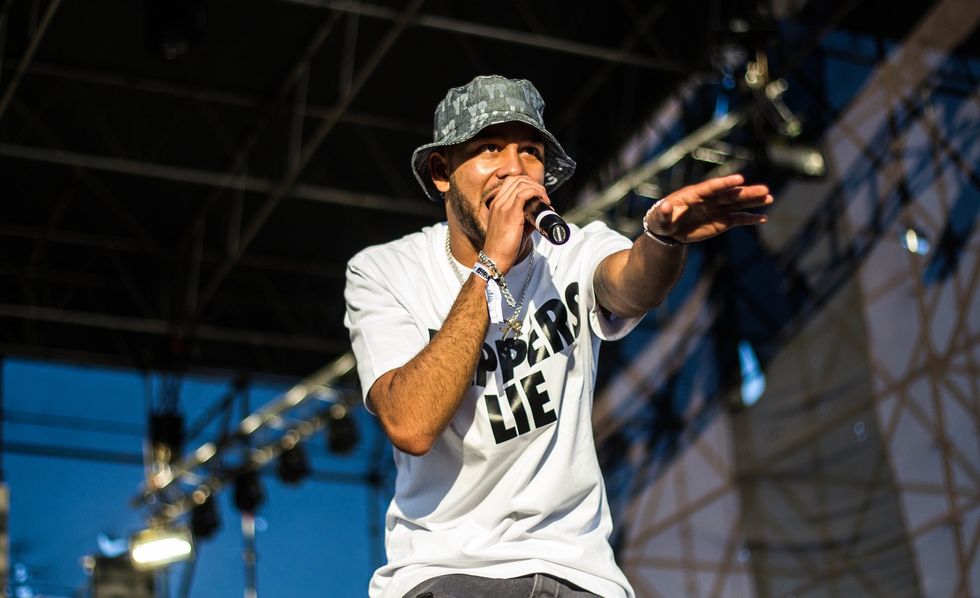 In just three months, one of South Africa's best rappers, YoungstaCPT, has release two noteworthy two mixtapes and an album.

In three months, South Africa's most prolific rapper, YoungstaCPT, has released two mixtapes and an album.

The first one, which came in December, is called The Cape & Good Dope and is a collaboration with production trio Ganja Beatz, who have produced hits for Cassper Nyovest, Tumi Molekane, Riky Rick and DJ Switch among others.

The music on Youngloon Taliboom and Y?-Fi (The Internet Mixtape) is mostly boom bap—you hear 808s on only a few songs on the former. The last time YoungstaCPT released a boom bap project was about five years ago when him and the Cape Town-based producer Arsenic released an album called Deurie Naai Alliance, as the duo DNA. The album produced the fairly successful single “Flowing Through My DNA." Most of his music since then has been leaning towards trap, a sound he's not by any means against, but feels boom bap deserves the same attention.

What sparked him to “take it back to basics" was a recent trip to Europe, in which he played two gigs in Germany and three in Switzerland. “They have your equivalents of your Casspers and your AKAs," he says of what he saw of the European hip-hop scene, between takes at Cape Audio College in Observatory, Cape Town back in November, where he was recording the mixtape with engineer Kay Faith.

“But they also have the guys who are doing a million views, but you don't know who they are. The funny thing is you get the guy who does a million views but he's rapping on boom bap beats. There are guys who are big, but big for the old school hip-hop sound, that basement shit. There's a group called INDIGOD, they're on that Smiff-N-Wessun, Wu Tang Clan, Boot Camp Clik sound, and they have a huge following. Their whole set was boom bap beats, no single turn up song."

That had such a huge impact on the Capetonian, as he has always been a big fan of old school East Coast rap. He goes on to acknowledge that in South Africa that type of hip-hop exists mostly in Cape Town, but sadly doesn't make it beyond the city.

I ask him why he thinks that's the case, to which he responds: “We have been Westernized. So we have to jump on the bandwagon, we have to follow the trends, we don't have our own direction. We do, like, house, kwaito and gqom in Durban. But with hip-hop the only thing we changed is that we rap in our mother tongues – your Afrikaaps, your spaza and motswako."

“So whatever beats they are making now, we make them. if you hear an American song that's big, you'll hear a South African version of it. And for me this project is important because it's the kind of hip-hop I grew up listening to," he says.

"... with hip-hop the only thing we changed is that we rap in our mother tongues – your Afrikaaps, your spaza and motswako."
About two years prior to Y?-Fi and Youngloon Taliboom, YoungstaCPT and Maloon released a few singles together—“Music 1st" and “Music 2nd" for instance. The two met through the Namibian hip-hop crew Black Vulcanite. Maloon produced the crew's 2013 EP Remember the Future, in which Youngsta was featured on a track called “Drinking Life."

“[Maloon] asked, 'Who's this brother?'" Youngsta recalls. “He was in Namibia, he asked me how the Cape Town hip-hop scene was, I told him it was emerging. Black Vulcanite organized his trip to Cape Town in 2013. In between that he sent me two beats. The rest, as they say, is history."

YoungstaCPT has come a long way. He's now one of the most visible Cape Town hip-hop artists and his resume boasts collaborations with veterans such as DJ Hamma, The Beatbangaz (DJ Ready D, E20 and DJ Azhul), Tumi Molekane and Jitsvinger.

AKA once said in a tweet that he was totally down for a collaboration with the 25-year-old rapper. Y?-Fi is his 27th mixtape–24 of those were recorded in the space of two years. He also has six EPs under his belt, and Youngloon Taliboom is his third album. In 2015, for his #VisualVrydag campaign, YoungstaCPT released more than 20 music videos.

Y?-Fi has a monolithic soundscape–dusty chops and warm analog drums, and no features. Most of the tracks are short, featuring one verse and sometimes no choruses. YoungstaCPT's delivery is still solid, his bars harder than your favorite's, whether he's being comical or spitting vicious lines aimed at wack rappers. On the mixtape he also displays his knowledge of hip-hop, making clever references to vintage rap crews like Naughty By Nature and Gangstarr.

Youngloon Taliboom contains the same sensibilities. Lyrically, it's YoungstaCPT at his finest, and the most focused he has been. The rapper has never been scared to express his views on the human condition. On the deep cut “Strange Place," he touches on how rife racism still is in Cape Town: “Our leaders ain't doing shit so the city rots/ And racism didn't stop/ People acting like society's fine/ Then why I got friends living behind the poverty line?/ Cape Town is still stuck in the dark age – apartheid/ I feel like I was born between a rock and a hard place."

On “Arbian Gang$ter," the album's first single, he raps, “South Africa's torn, divided by race/ The people who fought feel like it was a waste/ 20 years later, we in the same place."

What makes Youngloon Taliboom a great listen is that YoungstaCPT is not afraid of being vulnerable, but he isn't whiney–his delivery is as candid as ever, revealing a young man who's willing to fight for young people like him who face the same challenges in a country that's struggling to deal with its troubles.

The production is warm – the basslines, which are a tad dominant, contribute to the emotion with which YoungstaCPT tells his story.

After years of struggling to infiltrate into the South African mainstream scene (“I haven't blown up because I'm not back enough," he raps on “Playing with the Microphone" off Y?-Fi), it seems a new channel has opened for the rapper.

His trajectory looks like it will be similar to Tumi Molekane's who, for years, struggled to get an audience for his music in South Africa, until Europe caught on when he got signed to the French label, Sakifo Records. And the rapper seems to have his nest cast abroad. “I'm not gonna wait for South Africa to catch up to me," he tweeted recently ahead of his Australian tour.

However it works out, it would be great to see him getting more love at home than he currently is. YoungstaCPT is currently on tour in Australia, check out this tour dates here.