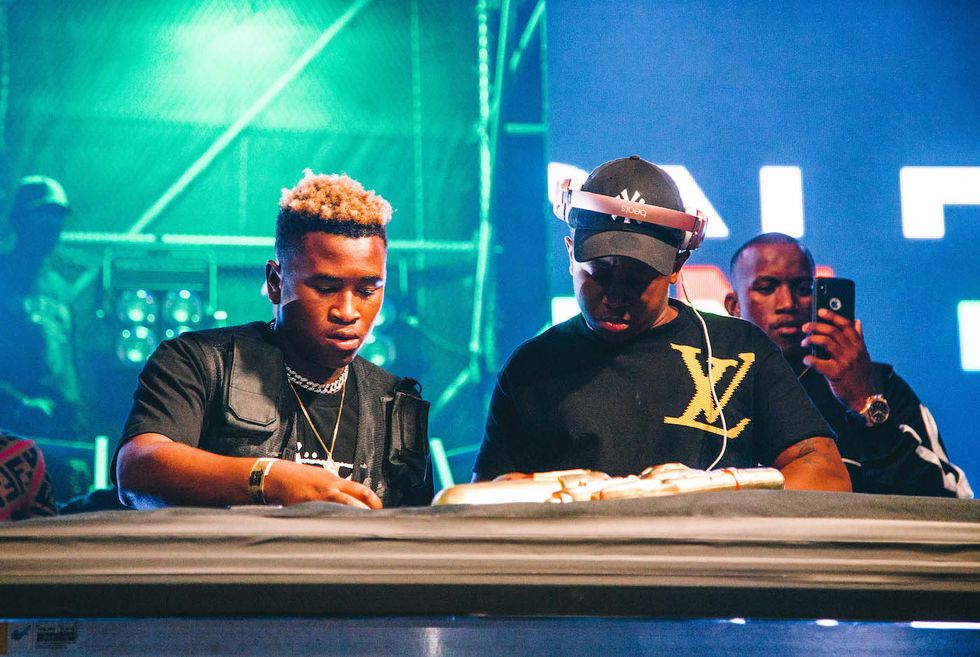 Our list of the best South African songs of the month includes new singles that dropped in July, alongside those that were highlighted by getting the visual treatment.

Check out our selections below, which feature MarazA, Stiff Pap, Kabza De Small, Beat Sampras, among others.

The drums don't knock as hard as on their previous songs and most gqom songs. The adlibs are softer, too. The trade off is made up for by a bigger focus on vocals, that guarantee a wider appeal. NaakMusiQ's melodies and DJ Tira's chants are safe choices for a song that won't struggle to travel.

Nadia shares a gnarly boom bap beat with veteran Khuli Chana in what is arguably the best song in her stellar debut album Nadia Naked.

An amapiano remix commissioned to Loxion Deep by DJ Sandiso for his single "Buya," the song makes the connection between the house subgenre and kwaito quite obvious.

"Neww Neww" displays chemistry from two dynamic emcees, and achieves the feat of being catchy, while still displaying great traits from the two artists. They maintain a uniform flow so effortlessly, they make it look easy. Their upcoming joint project promises to be a gem.

DJ Kaymoworld "The Come Up" (ft. 25K, Reason and Espiquet)

Newcomers 25K and Espiquet appear alongside Reason on DJ Kaymoworld's new single, which is fittingly titled "The Come Up." 25K delivers a catchy hook, while Reason and Espiquet rap laidback verses over a minimal trap instrumental.

Gigi Lamayne gathered kasi rap royalty for a song that's named after the legendary radio show The Full Clip, which aired on YFM in the early 2010s. All the rappers featured on the song used to be mainstays on the show, and are all from Soweto, where kasi rap is believed to have been born.

A collaboration no one saw coming, but it works perfectly fine. Rouge's high energy is the yin to the yang that's Emtee's laidback delivery.

Khuli Chana has been in the game for years, but he makes sure to never rest on his laurels. "Ichu" is another song in which the motswako legend's innovative nature shines.

A soulful amapiano smoothy that features Samthing Soweto, an artist who can do no wrong and has one of the most impactful voices in the game.

A notable remix that features a standout verse from AKA, who lets us is on his bromance with Da Les.

Stiff Pap is on to something. Their latest single, a further exploration of kwaito and modern electronic music, shows signs of masterfulness. Both rapper Ayema Problem and producer Jakinda merge perfectly, as a result of the time they've been making together.

An electronic soul tune with dope raps (and they make a lot of sense this time around). With its bright synths and pads, "My Lady" is summoning the summer that we've been longing for, for the past few months.

King Monada is essentially a house artist known for his summer anthems such as "Ska Bhora Moreki" and "Malwedhe," but "New Day" doesn't intend to make you dance. The song focuses on vocals more than it does on instrumentation. The artist croons with the aid of autotune over a guitar riff sitting on 808s drums. The song features Leon Lee, who's known for his Sepedi vocals. He sings backing vocals and is also given a verse.

Frank Casino highlights one of the best songs from his 2018 EP with a blockbuster music video. The video kicks off with a skit that could pass for a movie scene. Learn more here.

Guitarist and vocalist Dylan Fine and producer David Migwalla make up the Cape Town-based duo known as Beat Sampras. Their music is a mashup of genres including R&B, soul and trap. In their latest single "Stop and Go," Dylan strums and croons atop a trap bassline. The track is a soothing love song that reveals great writing, effortless singing and the chemistry the duo has displayed in their previous records and performances.

The Big Hash highlights "Circles," a standout song his mixtape Young, with a new video. In it, the rapper tells parts of the ordeal in which he lets us on the song visually. The woman in question is seen betraying Hash. The video was directed by Clout Cassette, a name you should be familiar with if you've been checking out A-Reece's recent music videos.

The gems on Flame's debut album are plenty. The title track is one of many. It has been on repeat at the OkayAfrica office alongside many others on the project.