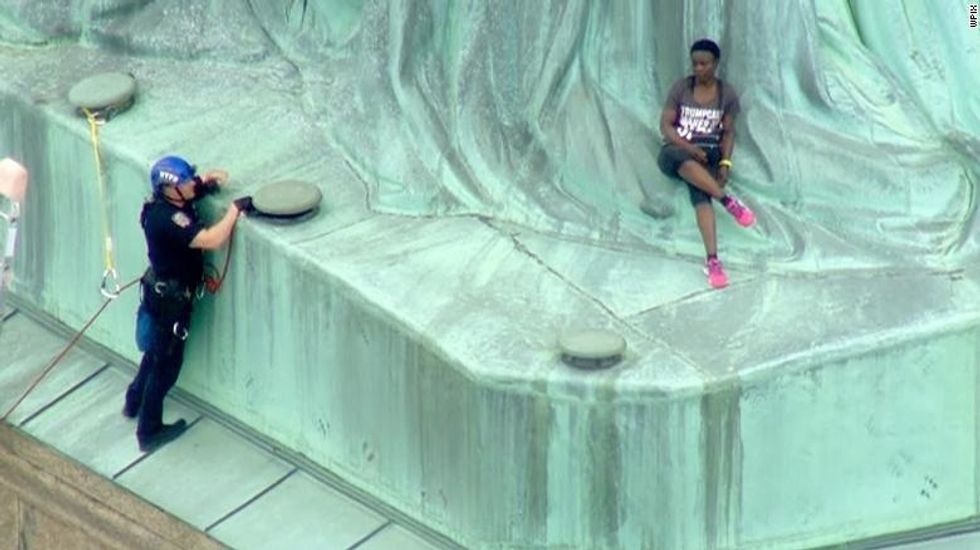 Therese Patricia Okoumou told authorities that she wouldn't come down "until all the children are released."

There are many ways to protest. For some it's taking to the streets and marching, for others it's carrying out random acts of kindness. Yesterday, for immigrant activist Therese Patricia Okoumou, protesting meant scaling the Statue of Liberty in a courageous demonstration against Trump's dreadful anti-immigration policies on the very day meant to mark America's independence.

The 44-year-old Congolese immigrant and Staten Island resident, climbed the tower on Tuesday to protest Trump's "zero tolerance" policy that caused thousands of immigrant children to be detained and separated from their parents. She told police that she would not "come down until all the children are released," reports CNN.

It took four hours before the police could get Okoumou down, after which she was taken into custody.

Okoumou is an active member of New York-based activist group Rise and Resist, whose members had previously held an "Abolish I.C.E" banner at the statue. Members of the organization said they had no knowledge of Okoumou's plans, but released a statement of support, stating that they are seeking out the best legal representation for Okoumou.

Okoumou has been involved in several anti-Trump demonstrations in the past, even being arrested last year at a protest at the Department of Labor, reports Huffington Post.

She's being applauded for her dedication and bravery on social media. Much like when Bree Newsome climbed a 30-foot flagpole in South Carolina to remove the Confederate flag two years ago, Okoumou is yet another example of black women stepping up in the name of social justice, when others won't.

Her name is Therese Patricia Okoumou. She is the Black woman who protested migrant family separations by sitting… https://t.co/9dpSGhdMtR
— Jermaine 🏳️‍🌈 (@Jermaine 🏳️‍🌈) 1530750325.0


My girl is perched on the STATUE. OF. LIBERTY. Pink sneakers, legs crossed giving the side eye, protesting this cou… https://t.co/qHIGASQbOW
— The NYC Film Chick (@The NYC Film Chick) 1530746317.0


Therese Patricia Okoumou - that is her name. #SayHerName If you have any clue how we can help her with her bail p… https://t.co/oX8FuPQyxN
— patrisse cullors (@patrisse cullors) 1530754539.0


Her name is Therese Patricia Okoumou. Her actions today represent the righteous fury of those who believe in a bett… https://t.co/U6dIxUHpcj
— Blair Imani (@Blair Imani) 1530760580.0

Therese Okoumou. A hero. Wouldn’t come down from the Statue of Liberty until “all the children are released.” https://t.co/RzxQIrnMvl
— Michael Skolnik (@Michael Skolnik) 1530758522.0


Therese Patricia Okoumou. Gives a shit. Apparently. Without some form of direct action, nothing will change.
— bucklebucket (@bucklebucket) 1530750119.0


Her name is Therese Patricia Okoumou. She is the Black woman who protested migrant family separations by sitting… https://t.co/qUZsk8yyDi
— StanceGrounded (@StanceGrounded) 1530752267.0


For all those complaining about first responders time being wasted for the Statue of Liberty protest — y’all have b… https://t.co/ydg09i4s8R
— Kaivan Shroff (@Kaivan Shroff) 1530761800.0


Today, Therese Patricia Okoumou, a Congolese immigrant, scaled the Statue of Liberty and said she would not be move… https://t.co/SQKirOEGjx
— Cynthia Malone (@Cynthia Malone) 1530753326.0


I think this is the most profound photo of the courageous Therese Patricia Okoumou sitting at the feet of Lady Libe… https://t.co/ljdSGZnJlL
— Shaun King (@Shaun King) 1530795705.0