In Conversation: Patricia Okoumou is the Immigrant Rights Activist Facing Jail time for Climbing the Statue of Liberty 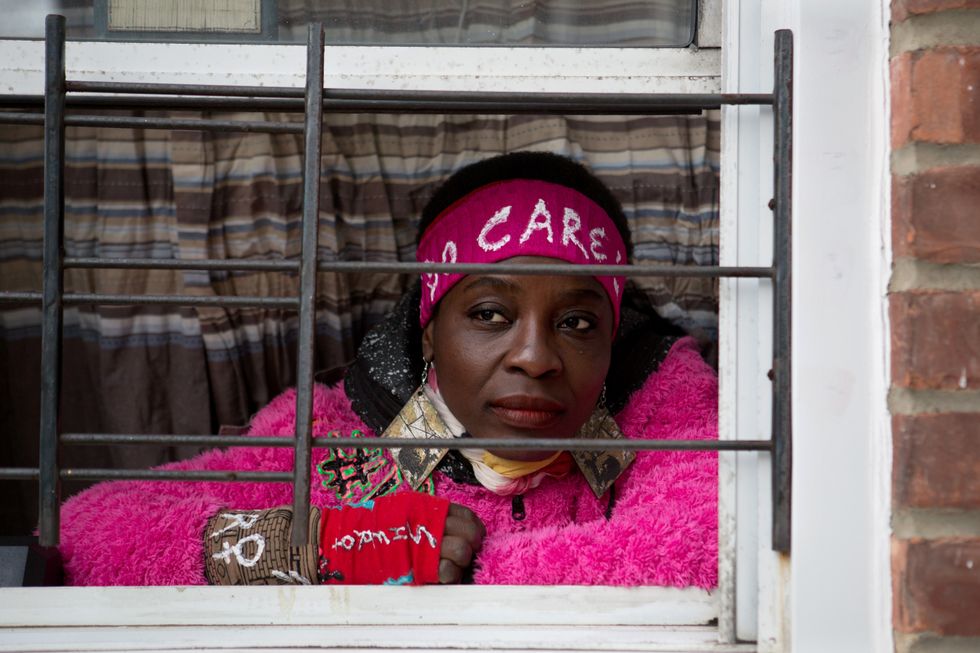 We talked to the Congolese-American activist through the window of the apartment where she's currently under house arrest.

When I went to interview Patricia Okoumou, the Congolese-American woman who scaled the Statue of Liberty last 4th of July to protest the child separation policy, she asked me to bring her a large, black, dark roast coffee from Au Bon Pain. This is not the most unusual request, but I had to hand her the coffee through the window of her ground floor apartment in Staten Island, New York where she is being held under house arrest. On March 1st, she was found guilty on three misdemeanor charges, and faces up to 18 months in prison.

In December, she climbed the Eiffel Tower, and in February, while delivering Valentine's Day cards to separated migrant children in Texas, she decided to climb the Austin, Texas headquarters of Southwest Key, which operates child detention centers. The Austin action violated the terms of her bail, and she is now under house arrest wearing an ankle bracelet until her sentencing on March 19th, making the conditions of her bail now more severe than that of Harvey Weinstein. U.S. authorities have forcibly separated at least 2,855 children from their parents or guardian at the border since April 2017, according to the U.S. Department of Health and Human Services. I spoke to Okoumou through the window of her apartment on a chilly afternoon marking International Women's Day.

How did you get into activism?

My father was, as long as I've known him, the pilot of the president of the Republic of Congo, Denis Sassou-Nguesso. So he got to travel throughout the world: Asia, Africa, you name it. We were raised in a wealthy environment, particularly by the airport, where only the wealthy people built their houses. It was my playground. I had the liberty to express myself physically by climbing those construction sites. Everybody knew that was me on the roof—nobody punished me for it. I never thought I needed to be punished for it. It was just what my spirit drove me to do.

I joined the activist group Rise and Resist because the year prior (to the Statue of Liberty action), I was arrested. I was at the Department of Labor protesting outside, not to anyone in particular, but I had been upset with my former employer, Asphalt Green, who discharged me unjustly, only because I was complaining of my wages. And when I made them aware that I took my complaint to the Department of Labor, they retaliated. So for me to fight the system, to fight the injustice, I began my protest on the street, which was lawful.

However, someone had called the police when they saw me in the lobby, and there was this moment of unconscious bias where the cop came without reading me my rights, without telling me to leave, just assumed that I was causing trouble, when the video shows that I was just calm and trying to speak to my attorney at the Department of Labor.

Patricia Okoumou, the Congolese-American woman who scaled the Statue of Liberty on July 4th, 2018 to protest the child separation policy, poses for a picture through the window of her apartment where she is under house arrest in Staten Island Photo: Joe Penney

Why are you so passionate about the issue of child separation?

My parents divorced when I was two years old, so I did experience family separation. My mother was young, she got into a marriage and he was abusive, and he used his wealth and authority to take custody. She never had a chance. My stepmother unfortunately did not like her stepchildren. My father embraced her children as his own, but she was not able to do that to us unless she could own us somehow emotionally.

I saw that with the youngest child of my mom and dad, my brother. He was confused, he didn't recognize his real mother because the stepmother tried to just steal him. So I knew as a child something was wrong there, you can't do that. I've always remembered that I have a mom, and she loves me and cares about me regardless of her poverty and regardless of the distance from how far she lived from us.

When I first arrived to this country, one of the things I noticed is we had this governmental agency called ACS, Administration for Children Services. I didn't understand how a government can strip someone of their right to be a parent. We don't have such a system (in Congo). That's why it puzzled me that this country can be behaving in that manner. We don't just have that. We take care of our own. We don't have nursing homes, we take care of our elders, the community gets involved to raise a child.

What were your experiences coming to this country?

Prior to coming here, I was a teenager. My dad noticed my passion for learning English. He even gave me a tiny little dictionary that was French-English, English-French. I was exposed and influenced by American culture, just by listening to the music on the radio, watching American movies and admiring their way of life. One thing I was blinded by was watching movies for example where everybody in the movie was white, except for example a couple of people, and it was always the chief of the police department that was a minority. And I was blinded by this sense of diversity, the inclusion.

I came to this country believing in the Statue of Liberty and what she stands for: liberation, freedom, and a welcome venue for immigrants and all people. However, my experience hasn't been that way. It dawned on me that I was lied to. I call it false advertisement.

I came on August 2nd, 1994 with a visitor visa, which was to last for six months, and I overstayed it. Before my papers expired, I applied for social security and received a letter in person. The social security that was promised to me in two weeks never arrived. Policies were changing all the time, so I found it very difficult to navigate through the system to sustain employment.

But I also experienced discrimination, especially at work. At home we are very outspoken, we express our feelings toward one another, we may even get into physical fights, but that's part of people being able to say how they feel and move on. But here, you're not allowed to express your feelings, say how you truly feel, or be honest. You have to joke. And I found that very alienating. Why are people joking when they're telling you the truth in your face? So it's something I just have not been able to adjust to.

There's a lot of cynicism. There's a lot of feelings that get hurt. Americans are thin-skinned. Almost like Donald Trump, pretty much. They get their feelings hurt—they don't want to verify what you mean, why you did or said what you did, they just move on and get offended. I find them moody.

In December, you also climbed the Eiffel Tower?

I was asking and pleading with French President Emmanuel Macron to help the migrant children in our country, because France gave us the Statue of Liberty and I really felt that they could have a say in it.

You got really high up, I saw a picture you posted!

Oh yes, that's the highest you can go. Beyond that, it was foggy and it would've defeated the purpose of being visible.

And you didn't have a harness or anything.

What about Obama's deportation policy? Is it something worth addressing as well?

Barack Obama was called the deporter-in-chief for his record number of deporting immigrants, I assume illegal immigrants—I don't like the term illegal because no human being is illegal and we shouldn't be calling human beings aliens because our children our listening and it sets a bad precedent. He went after criminals. He didn't go after babies, and we didn't have babies in cages. What we have here are concentration camps and I am opposing that.

While I'm in my own home, if I open the door to someone, whether they're friends or a stranger, I'm responsible to a degree to what's happening in here. It's all about how we tolerate other people's behaviors and conduct.

Is there anything else you'd like the public to know?

The pre-trial services have recommended three months in prison and one year supervision. We don't know what the judge will decide on March 19th. But when this is all said and done, I pray that God gets me the hell out of here, that I go live in Canada or France, or in Africa, in my country, where there are some things we hold dear. Our culture, our values, where people live in kindness and compassion. There's really no compassion here.

The bottom line is, I'm being treated this way for one reason, and one reason only: for my race. I'm a black, immigrant woman. If I had been a white woman who had climbed the Statue of Liberty on a day like Independence Day, for the voiceless, the story would never have died. Every time they mentioned the border and the detention centers and the children, my name would've came up. But that is not the case. All the politicians have turned their backs. If we don't have public pressure, I will face prison.

There's a letter to be downloaded on my website to be printed, signed and mailed to US Attorney Berman. He is the man who is responsible for dropping these charges.

This interview has been edited for clarity.