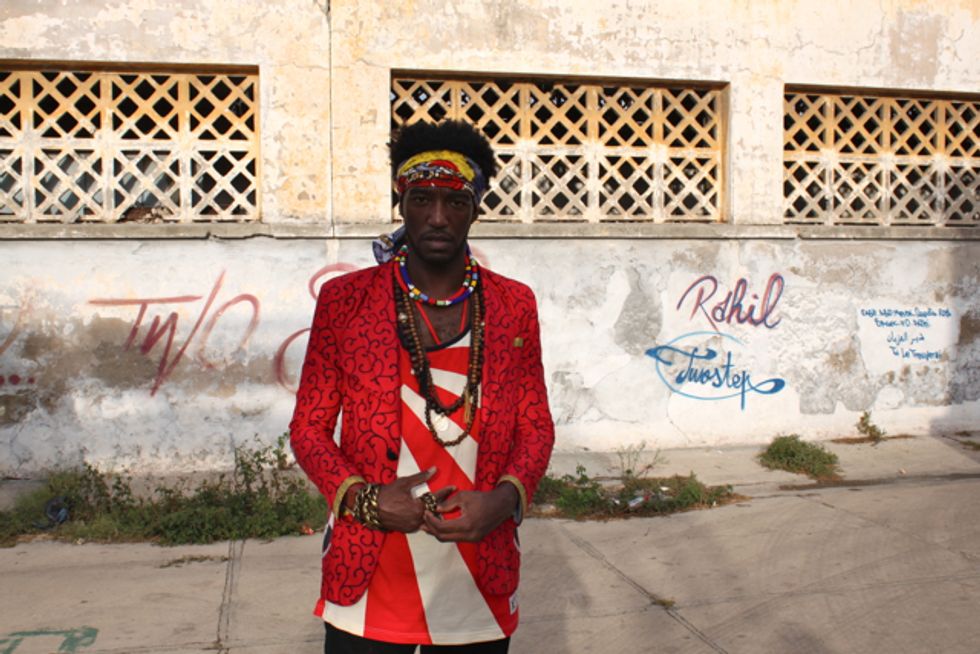 In July 1969, Jimi Hendrix traveled to Morocco. The short trip, which took place just one year prior to Hendrix's death in September 1970, has been heavily mythologized and a source for urban legends about what he did and didn't do while he was in Casablanca and the town of Essaouira.

"The people of Morocco have never recovered from Jimi’s visit and the tales are remarkable," Hendrix's travelmate, Deering Howe, is quoted as telling researcher and biographer, Caesar Glebbeck. "Like George Washington he slept in everyone’s house around the Moroccan countryside!"

For his latest music video, Brooklyn-born rapper/DJ/producer/style-guru and longtime globetrotter, Stimulus, set out to recreate Hendrix's travels in Casablanca. Stim, who's most recently been cruising the world in support of his new Stimmi Hendrix project, released a five-track homage to Hendrix last month.

In the video for "Old Me," Stim teams up with Moroccan designer Amine Bendriouich, who previously linked with Hassan Hajjaj on the stunning Wax Super Deluxe menswear collection.

Shot on location in Casablanca and Marrakesh, the video follows Stim (and his Stimmi Hendrix persona) during the ten-day L'Boulevard music and arts festival. Stim explains further:

"I chose Morocco partly because the energy, color and diversity of Casablanca reminds me of the spirit of Jimi's music. I became more interested in Morocco because of all of the myths and legends about Jimi Hendrix's experience there. Rumors of him renting a place, the reasons why he never actually performed etc etc.

We were able to shoot on location in the apartment Jimi is rumored to have spent all of his time (apparently only 3 days, not 6 months) in Casablanca. He spent time with a muse, socialite, creative connector named Atika. Her son, whom she had with the late Herman Leonard (famous jazz photographer), still lives in the apartment.

Working with Amine was great. I have a huge amount of respect and admiration for his clothing design. His design process has a lot to do with the influences he gets from his friends, the things they do and the places they live. He excels at creating pieces with depth that show their inspiration while being unmistakably new and different. I have the same opinion of Jimi Hendrix's music."

Today, we're excited to premiere Stimulus' Hendrix tribute video for "Old Me," directed and styled by Amine Bendriouich. For more from Casablanca, see below for exclusive behind-the-scenes photos Stim sent us from L'Boulevard Festival.

Stimmi Hendrix: A Ritual Union Pt. 1 is out now.