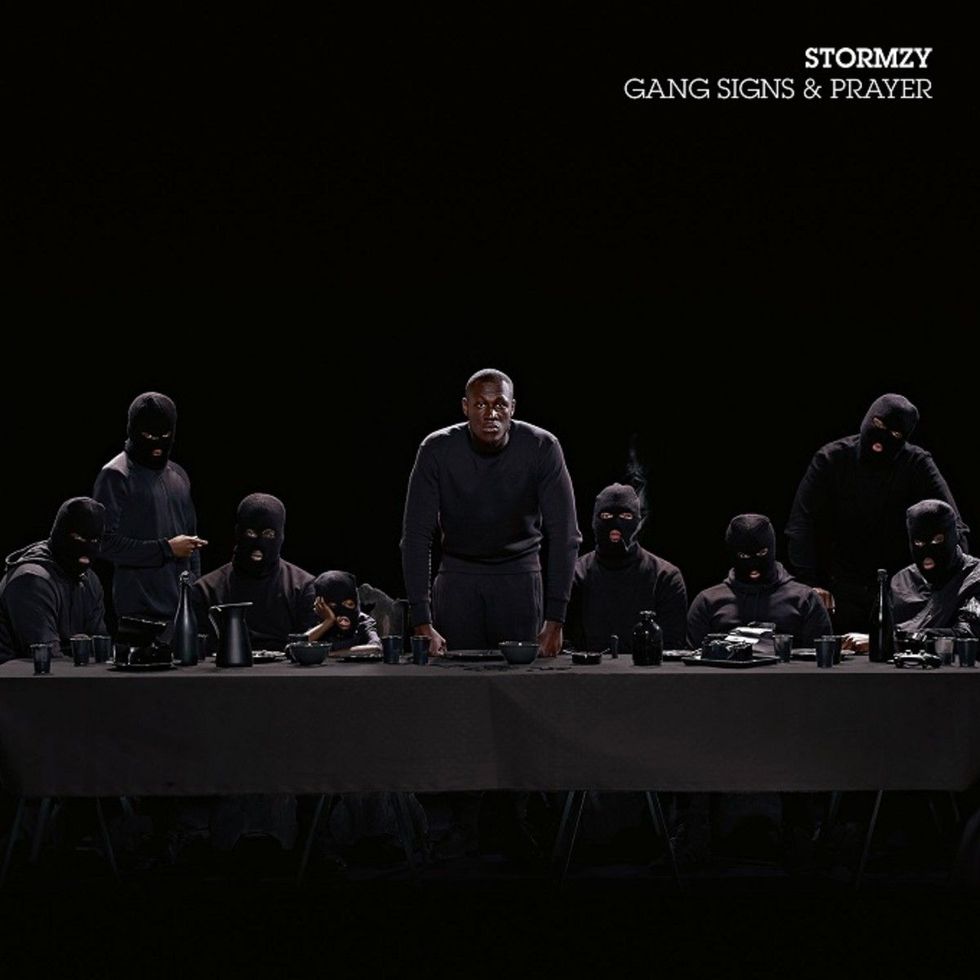 Is Stormzy the saviour of grime, or indeed, that of British pop? His new album 'Gang Signs & Prayer' offers a good argument for it.

“Gimme the crown man, I want that.”

With time, the individual listener will confirm or disprove of this, but the feeling Stormzy's new album evokes—above or before critical reasons are given—is just as important a metre.

It's the feeling you probably got on listening to Get Rich or Die Tryin' or Good Kid, M.A.A.D City for the first few times, much like falling in love, you feel it like nothing else, but try putting it into words and they inadvertently fall short of the feeling it evokes. So a review will have to do after all.

First things first, opener “First Things First” is that staple of rap albums intros—part career overview, part statement of intent. One which the likes of Drake have utilised as a street single (once DJ Premier’s remit) namely on “4pm in Calabasas,” “6pm in New York,” and more relevant, “5am in Toronto,” whose cluttered piano loop has been modified only slightly to make the beat for “First Things First.”

As is evident all throughout Gang Signs & Prayer, Stormzy’s own personal narrative and phrasing, as they should, sets him apart from any lot even when he's chorusing a shared sentiment like, “Fuck giving money to people who don't like us/there's riots in the city, tell me where to sign up,” echoing Wiley from the intro to his career victory lap album, Godfather.

Grime’s continued resurgence is, in part, a blowback to frustrations with record labels, openly hidden fences in the British music industry, and wider displeasure with the well-being of young black people.

Now artists like Stormzy are able to do away with middlemen—record labels, show promoters, and any number of industry expertise—and sell their music and merchandise directly to fans.

This new level of autonomy is rightly a confidence booster, and one that makes otherwise rote braggadocio sound like a cast iron manifesto as it does on “Cold,” when Stormzy rhymes, “All my young black kings rise up man, this our year/all my young black Queens right there, it's been a long time coming, I swear."

The intent is serious and the sentiment truly touching. Despite his penchant for cutting battle-rhymes, combative delivery and an expected insistence on his supremacy, sending a rousing call to the many who swear by him shows a willingness for a concerted effort for dominance, or rebellion, to say the least.

First single “Big For Your Boots” is produced by Fraser T Smith, best known for his work with Adele. On paper, the pairing might appear incongruous, but the result is a real delight brimming with brag swag and a jittery drum pattern that's made even more so by the squealing soulful sample.

Here, major aspects of Stormzy’s talent are on display: the ability to adapt to a beat, clever and memorable metaphors, wordplay and that acerbic delivery—all golden tenets of a great MC. But he's also able to own up to and repurpose his vulnerabilities, enough to make his detractors appear silly.

On “Shut Up,” he has no problem admitting to his disappointment after losing out of a MOBO Award. "Why? Because I ain't won a Mobo before, duh.” An award he then won twice, in consecutive years (2014, 2015). Neither does he worry about risking ridicule by admitting to being “in the O2 singing my lungs out, rude boy you're never too big for Adele,” as he does on “Big For Your Boots.”

The two part suite “Blinded By Your Grace, Pt. 1" and "Pt.2" with MNEK, are placed five songs apart. The reason could be to give the illusion of them being two separate songs (they aren't), or simply to separate the emotions each evoke (they do).

“Blinded By Your Grace, Pt. 1” is a somber worship song—“I can't escape you/I can't replace you”—and one on which Stormzy sings confidently, but not exceptionally well.

For "Pt. 2," singing duties are delegated to MNEK and a choir’s superior voice—both of whom elevate this second version into a rousing devotional.

Sticky Fingaz never truly eviscerated Eminem on “Remember Me”, but the mere fact that his guest verse matched that of Eminem on his chart conquering Marshall Mathers LP earns him more points.

Just last August when Giggs’ Landlord came out, Stormzy's towering verse on “The Blow Back” frankly made that of his host much less memorable.

This time around Grime Lord Ghetts' verse on “Bad Boys”, with J Hus on the hook, is reminiscent of Fingaz’ own but he goes a step further by seeming to anoint to Stormzy in a typically skillful verse, concluding that “it was all calm before Stormzy, now it's lightning.”

Of the many songs dedicated to mothers, Tupac’s “Dear Mama” is the lighthouse to which all should look. Even when from more humble (or less talented) artists, a searing honesty in songs like this always radiates.

In “100 Bags,” Stormzy's own celebration of his mother, what would have been triumphalism rises to the level of a covenant fulfilled, “always in and out of beef with the bailiffs, now I'm on the playlist.”

Not since 50 Cents’ Get Rich or Die Tryin' has any album cover been as arresting as that of Stormzy’s Gang Signs & Prayers, or so I’d like to think.

In the former, the bullet hole in the glass narrowed in on the crucifix on 50's body, which also held a holster and a durag on his head. In Stormzy's, Leonardo da Vinci’s The Last Supper, already subject to countless reinterpretations, gets a most radical take, even more so than the Mary Magdalene subplot espoused by Dan Brown.

The original painting had a cast of 13 which has been whittled down to 9, dressed in all black outfits and balaclavas, including a child, with Stormzy hunched over the table staring into the camera.

The Last Supper is one of the most famous paintings in the Western world. Recasting himself as Jesus and his co-d's as the mantle-holders is only the pre-provocation before the first song “First Things First” comes on and continues.

Is Stormzy saying he is the saviour of grime, or indeed that of British pop, here to bring new life to it? But then The Last Supper is supposed to be his last meal before the redeemer’s death, isn’t it? Unless it's Jesus’ ascension to heavenly glory that Stormzy is positing here, in which case, as you were.