Sudan Archives Is the Future 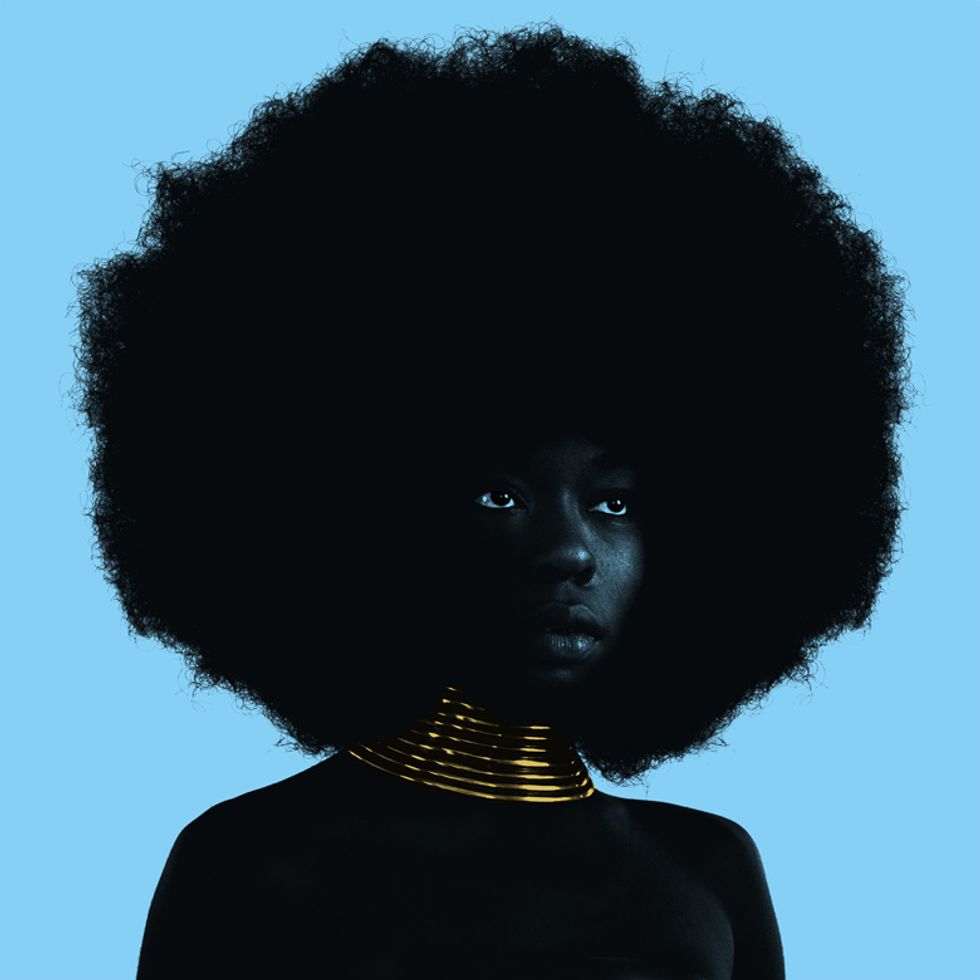 We talk to the buzzing artist, who blends Sudanese folk music with '90s R&B in her highly-impressive new Sink EP.

Her awe-inspiring, one-woman setup involves looping live strings over electronic beats and a songwriting style that pairs together Sudanese folk and fiddle music with '90s RnB. The cover of her new EP Sink features a portrait of Sudan Archives, her skin made several shades darker to match the midnight black of her iconic afro. It's a powerful piece of art to accompany the new tracks, a statement of unapologetic blackness and defiant beauty.

I spoke with Sudan Archives a few weeks before her Sink EP released. Her lively, oftentimes sassy persona had me cracking up–particularly when she took off on a Drunk History-style retelling of the Oshun story. We talked about Sudan's foundation of playing music in church, power through performance and her connection to Africa.

Is that where you're based out of currently?

No, I live downtown. I just like coming to Pasadena to shop and eat. (laughs)

I was really interested to find out that you come from a religious household and were performing music in the church before anything else. How do you think that foundation has informed your own music?

I started playing the violin in church, because I didn't really have an orchestra in the school and my mom was just like, well you should join the choir and mess around and teach yourself how to learn some of the songs up there. I was really shy and didn't want to do it at first, but eventually I ended up there and I remember I was playing with a saxophone player and a drummer and a pianist and the choir. It was like a really small, 20-person choir at the church.

I sat next to the drummer. It kind of pushed me to learn my own violin lines to each song. I feel like that really helped me start making my own music, because now when I make my own beats I usually start with a violin, because that's what I did in church.

How old were you when you first started performing in the church?

What's your relationship to the church now? Is there a church that you go to in LA?

I think I do my own form of church, like my own ritualistic church in my home. I haven't found any churches out here or visited any churches out here, but I feel like I have my own spiritual practices that I do solo. I just like to pray and meditate and learn about religion. The music that I like in Sudan, typically they're Muslim and they sing in Arabic.

I'm inspired by music from several religions, so I try to teach myself about other things in life besides Christianity. On my own, I like to practice breathing, meditating, positive thinking. The space that I'm in has to have a vibe. It has to have the aromatherapy, incense poppin', just high self-care. Herbs. Bubble baths. Making your own teas. Making your own body care products.

Can you tell me about your upcoming debut LP? Is there a big sonic shift in terms of the solo approach to music of your first two EPs?

SA: Yeah, for example, I made a couple of songs that are gonna be on the album with another producer. We both produced it. He plays the piano more than I do, so I would like to have him onstage with me playing the part that played on the song. I just feel like I'm going to be working with other producers and musicians that are gonna come in the studio and lay down their ideas, but for EP1 and EP2 it was just all me messing around on my iPad and my computer.

My favorite song from your new EP is "Beautiful Mistake."

Oh, that's one of my favorite songs! I feel like it's very experimental, though, and a little out there. It's not gonna be everyone's favorite song... I was writing about this relationship, where I'm like ten years younger than the other person. I felt like when we started dating his friends were always like hating on me. They didn't understand the potential of my career. I was still making beats on my iPad. I was a barista at a coffee shop downtown and I was a waitress, so I had two jobs. To them it just seemed like I was this hippy girl. But they're just old people, so they don't know what they fucking talk about.

So I was just tryna tell him, wassup, you just gotta keep watering me. I felt like he was the main person at the time to help me get instruments. He bought my first violin pickup, and that's how I started experimenting with violin electronics, so I was trying to uplift him, like don't listen to the haters. Fuck them. (laughs) So that's what that song's about.

That's beautiful. There's a few live videos of your song "Paid" on YouTube where you sample audio of a woman telling a story of some kind.

That's Luisah Teish. It's basically the story of Oshun. Back in the day, there were several gods and they were all male, except Oshun. They were on Earth, they were trying to make things happen and they were like, "Oh, we don't need Oshun. Let's just like do our own thing. So she got really pissed and she went to the moon and started doing her makeup, and she was like, "Oh, y'all think y'all bouta shit on me? I'm bouta dry up the whole world. So she dried up the whole world, and the gods went to the supreme god and they were like, "Can you help us out, man? Shit's dried up." And they're like, "Where's Oshun?" So they had to go get her, and they apologized to her. And she was like, "I'll accept your apology, don't do that shit again."

It's a Yoruba tale and I'm also inspired by Yoruba West African one-string fiddling music. So there's a connection.

It feels like you're one of the only active female artists currently on Stones Throw's roster. Is that a pretty accurate statement?

It's pretty accurate, because it describes the Oshun story. Don't fuck with me. Don't fuck with Oshun. Recognize. I'm the fucking main queen y'all. (laughs) I'm just playing. I'm really grateful. I'm not having any issues. I feel like they recognize the divine power. They're super cool and supportive. (giggles) I'm like the princess of Stones Throw.

As a black female solo musician getting booked internationally, do you feel a sense of power of when you're performing onstage?

Yeah, it gets a little weird, because I used to perform under a table and not even want to be seen. So I'm just now getting used to being seen and entertaining people. I feel like at the beginning of the set I always try to look up at God, so maybe that's where the church life comes from, because I always try to praise God and give thanks before I even engulf myself in the crowd and connect with them. So that's a ritual I do at every show. It kind of gets weird with everyone watching you. It's good if you can humble yourself before you even like, you know, turn up.

Who were some of the first Sudanese and West African artists you were listening to when you were first writing music?

In Sudan, Asim Gorashi. He's a violinist. He makes really cool music. He plays violin and sings at the same time. He's also a world champion whistler. So that's kind of cool. I also like Francis Bebey. He's where I get my main influence from because he incorporates electronics. He's doing traditional instruments with electronics mixed together, kinda like what I'm trying to do in my own way. His whole sound is very minimal. He's not doing a lot, like his track "Forest Nativity," he's just talking, the electronic beats are very simple. You hear some flutes but also it sounds like strings. That's how I try to make my strings sound, like kinda drone-y.

I read that you first started going by the name Sudan as a teenager, before you moved to LA. From the way you dress to the way you style your hair to the visual aesthetic you cultivate in your music videos, Africa seems to be a huge part of your music and your image.

Yeah with Africa, I think all black people should go and think of it as vacation, because we are African. We're just in America. That's how I look at it. My connection to Africa is very natural, it's just me, like how people wake up and wash their hair and let it go and let it be, that's just how I'm living my life. I'm not doing anything different to my hair. I'm just kinda not altering it permanently and just waking up and washing my hair however it grows out of my head, it's just the way it is. It's just natural.

I went to Ghana, because I volunteered with The Taiwo Fund, which empowers children at the North Star School. I taught music production. It was some of the students' first time even using computers, but they all play drums. So it was really easy to teach them the electronic drum kits, because they just have so much natural rhythm. It was really fun because it was my first out-of-the-country trip, but it was also my first time teaching students. So it was like so much to handle, so much to consume. It was a great, life changing experience and I learned a lot from them and I'm just so grateful and humble.

If you could curate a mini-festival in L.A. what artists would you book and who would you get to headline.

SA: It would be an Afro-futuristic vibe. There's a lot of artists that I'm friends with like Petite Noir, Oyinda, FKA twigs, me, Solange, Jojo Abbott, Ras G, Kaytranada--oh a rapper. Maybe uh... Isaiah Rashad!