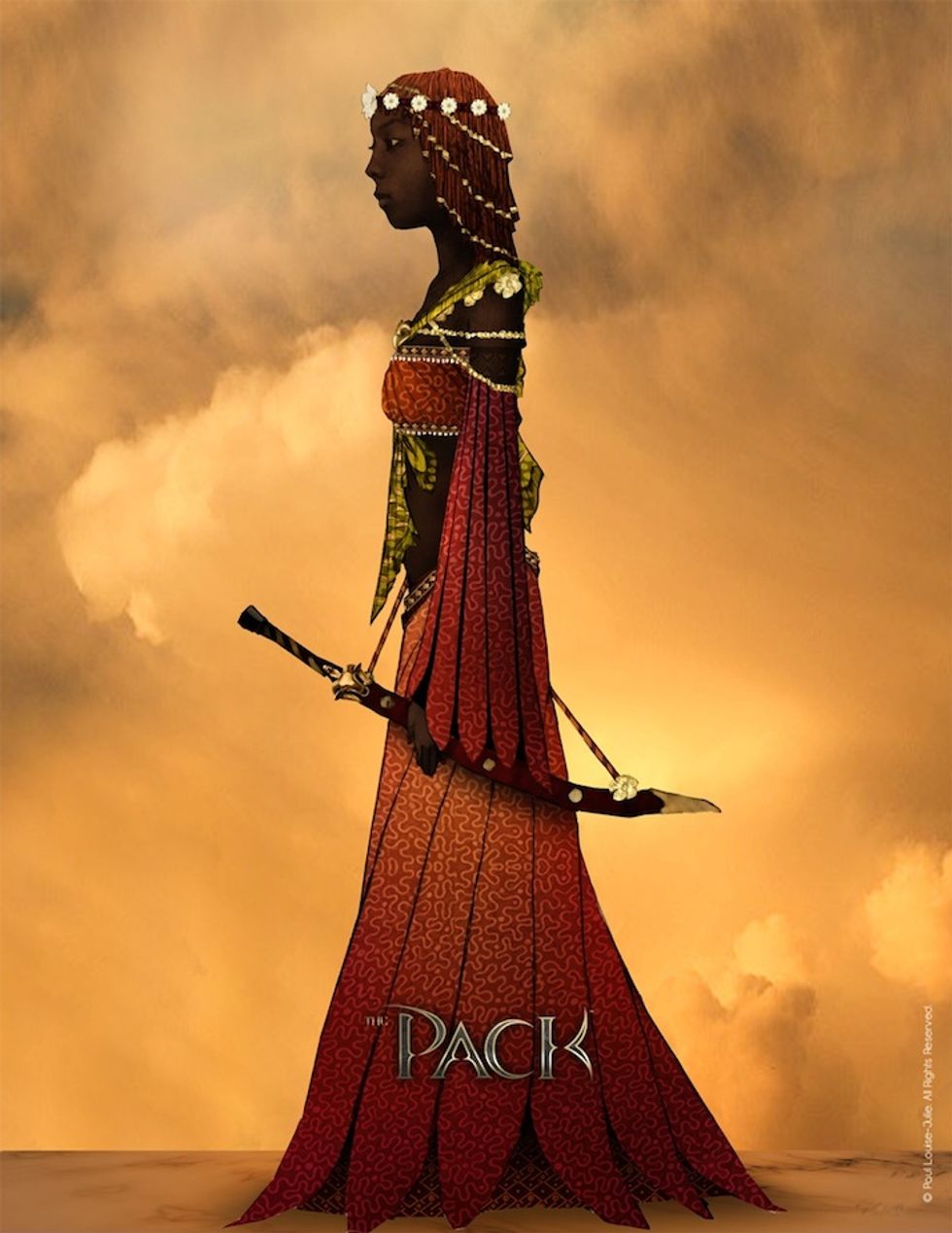 The Pack's creator, Paul Louise-Julie, discuss his work making a new mythology for the African Diaspora with his graphic novel series.

The Pack is a new African mythology graphic novel series from New Jersey-based French-Caribbean artist Paul Louise-Julie. Its end goal, a press release says, "is to create a truly African Fantasy Mythology that everyone of African descent can call their own or identify with." The project, which debuted last month with an issue dedicated to a pack of Egyptian werewolves, is set in a fantasy world created by Louise-Julie based off his years of research on African civilizations. Each of the series' five seasons are broken down by region (North, East, West, South, Central), with each season comprised of about five sagas focusing on a particular kingdom or realm. Ahead of The Pack's upcoming second issue, we spoke with the series' creator, writer and artist Paul Louise-Julie over email about his work making a new mythology for the African Diaspora.

Okayafrica: What do you hope to achieve with The Pack?

Paul Louise-Julie: In the end, The Pack is part of a bigger project: creating a new mythology for the Black Diaspora. However, it has to be done right - rooted deep in the legends and histories of ancient Africa with a twist of fantasy. The idea is that with every saga, people will be introduced to another fantasy realm and thus, a unique look at Africa.

OKA: Why should mythology matter to the Diaspora?

PLJ: Mythology is a fundamental part of civilization. It is the foundation upon which art, philosophy, and society are all based. Unfortunately, that foundation is missing in the Diaspora - or it’s been lost. I feel that if we can regain that, we can regain our identity which, in the end is everything. Identity is what determines the way the world sees you and consequently what you can contribute to it.

OKA: Are there any major themes that will tie the series together?

PLJ: One of the main recurring themes in this series is the desire to belong. Many characters in the series have had their lives destroyed in some way and long to return to that. That longing soon becomes a strive for purpose. Incidentally this is a theme that has caused much grief and triumph for many in the Black Diaspora, making it that much more personal.

Another theme would be retribution and justice. Nekhet’s quest for vengeance is what kicks off the whole story and sets the events in motion. Later on in the season and particularly in ‘Season 2: The West’, the recurring theme is the fight against overwhelming odds. That courage to stand for what you believe in and protect what you love despite what’s against you.

Lastly, there’s the theme of family. The Pack is essentially made up of different people from various backgrounds. Those bonds are tested throughout the series. They’ve built something for themselves and they learn to treasure it.

OKA: What are some other creatures we can expect to find in the series?

PLJ: There’s actually a lot of exciting creatures and races coming soon. Incidentally, I can’t reveal them all but what I can say is the dragons are coming...soon.

Many who have seen the map would have noticed the Omo Forest. Featuring in the upcoming Nubian Saga, it’s a magical realm and the last vestige from an ancient world that predates mankind. Created and ruled by the Omo spirits, it is also the source of many ancient fantasy creatures. This includes trolls, fairies, dragons and many others.

There will definitely be more cryptids from African folklore in the series but I can’t spoil which ones yet. The werewolves themselves are a cross between many African creatures such as the jackal, hyena, and even wildebeest. The true story behind their origin will also be revealed soon.

OKA: How would you describe your aesthetic?

PLJ: Oh, that’s a hard one...I guess it would be what it is for most artists: a blend of several things. I would definitely say it’s cinematic - the art of film is what initially drew me into visual storytelling. As a result, that medium has had a profound influence on how I frame and light my scenes. Specific pieces would be the Star Wars Prequels, Clone Wars, Rebels, and Peter Jackson’s LOTR-Hobbit Trilogies. For the werewolf sequences, I was very inspired by John Landis’ classic An American Werewolf in London. There’s actually a tribute to the “Subway Scene” in Issue 1. Spielberg’s Jurassic Park was also a huge influence not just for the creature sequences but for the lighting as well.

Secondly I would say it’s detailed. Having travelled most of my life, one of the main things I love about fantasy is that it takes you to other worlds. There’s a responsibility there, I think, and each of those worlds needs to be shown in tremendous detail. Especially when the world in question is a side of Africa that’s never been seen. I come from an oil painting background so I treat every panel as if it were an individual painting. Color theory not only affects the mood and narrative of a scene, but also makes a statement on the character of that environment. People tend to forget that details tell a story too; the rock textures, the textile patterns - everything

Finally, I’d say it’s sculptural. To me, fantasy doesn’t work if it isn’t tangible. Authenticity is everything. Growing up in France, I thoroughly studied master sculptors such as Auguste Rodin and Charles Cordier. I then coupled that with carefully observing the work of French graphic novelist Olivier Vatine and Italian artist Sara Pichelli.

OKA: What can readers expect from issue 2?

PLJ: It’s better. The stakes are higher and the action’s better. The Egyptian Saga represents the origin of The Pack so Issue 1’s job was setting that up. It told the readers why these things are happening and what exactly is at stake. But now with Issue 2, all that’s out the way and I can just get to the story.

Khenti’s already a werewolf, though he hasn’t quite grasped what’s happened to him yet. We also pick up right where we left off with Nekhet. The aftermath of the events that happened in Issue 1 also give rise to the new antagonist, Akhenaten. Fans will recognize him from his brief cameo in Issue 1 as Akhenon’s son. He’s the new Pharaoh and was such a fun character to write because he’s this privileged, ruthless force of Nature. In a way, he’s a manifestation of Egyptian elitism just as his father was an incarnation of Egyptian conquest.

There are definitely new locations. One of which is my personal favorite from the whole saga: Khufu. It’s the Old Capitol Nekhet mentioned in Issue 1. I’m so excited to show it because it’s culturally the center of the realm. You’ll really get to see what Egypt looks like at its peak.

OKA: Where will the series head after Egypt?

PLJ: The next saga after Egypt is the Nubian Saga. How or what they’re doing there, you’ll have to find out. After that, theres the Sokoto Saga followed by the Tuareg and Marakash Sagas. That ends ‘Season 1: The North’. After a short break, Season 2 will start. That one’s set in the Western part of the continent. For those wanting a deeper look, numerous chapters of the already-written Mythology will be released in between sagas either as books or short stories. This includes:

OKA: How and where can people purchase issues 1 & 2?

PLJ: Issue 2 is set to drop on May 15th. Both can be found on iBooks and Kindle. After that, Issues 3-5 will be released 45 days apart. Once the first five have been published, a Kickstarter will be launched to print them as a collected edition, titled The Egyptian Saga. This edition will include exclusive artwork, variant covers, maps and commentaries from myself. From there, the idea is to get The Pack in every major bookstore in addition to the digital market.

Issue 1 of 'The Pack' is available now on iBooks and Kindle. Keep up with the series on Facebook.

Update April 18: 'The Pack' Issue 1 is also now available in French via iBooks and Kindle.