Review: The Queen of Katwe Transcends the Disney Africa Movie 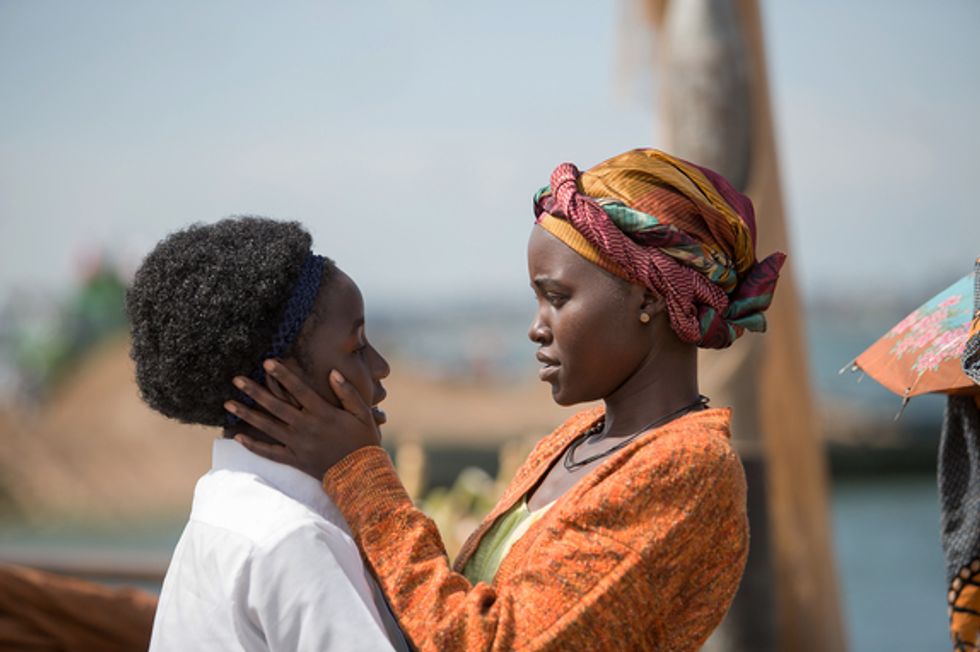 Lupita Nyong'o, David Oyelowo, a deft director and a handful of amazing child actors make Queen of Katwe a film worth seeing.

The Queen of Katwe poster looks remarkably like the The Lion King’s, which is not surprising as they're both Disney films set in the hazy glow of an African sunset. You might even expect Katwe, like The Lion King, to be a children’s musical set in the generic Africa of warthogs and lions, savannah and Acacia trees.

We all walked into the theater expecting to be disappointed. Hollywood has a terrible track record of telling African stories. As does Disney. And there was every indication that this would be a similar experience.

Adding to my trepidation were the negative vibes surrounding David Oyelowo’s recent appearance in Nina—which I haven’t seen—and Lupita Nyongo’s performance in Eclipsed on Broadway—which I did see and didn’t like.

This movie is not the competitive chess version of The Lion King. This is not generic Africa. It might be a cliche to refer to the setting as a character but from the very beginning, Katwe—the informal settlement on the edge of Kampala where much of the story takes place—is both a well rounded and difficult character.

The Lion King-Queen of Katwe Poster Remix by Aaron Leaf

The story is based on the true story of young Ugandan chess prodigy Phiona Mutesi and her struggles to overcome her environment and succeed. The Katwe of the film has an incredible energy and a specificity that comes from shooting in Uganda and having a production team with a local contingent. This is done without falling into the trap of respectability politics that would have you ignoring tough realities for a polished #AfricaRising narrative. There’s an ability to balance what’s good about a place with what is difficult about it.

The director, Mira Nair—of Monsoon Wedding fame—has had a long connection to Kampala. She has run the Maisha Film Lab there since 2005 but has had a connection to the place since her first visit there in 1989 when she was researching the Ugandan-Indian community for her film Mississippi Masala.

It was during that visit that the Indian-born Nair met her now husband, the Ugandan academic and a prominent post-colonial scholar Mahmoud Mamdani. Their son Zohran—who appears briefly in the movie as a slick chess-hustler—is one half of the Ugandan rap duo Young Cardamom and HAB. Zohran was a music consultant on the film and his group is behind #1 Spice, a track featured prominently in the film. The video came out today.

Oyelowo and Nyong'o have an unbelievable screen presence. A Nigerian and a Kenyan respectively, they inhabit their Ugandan roles with ease (although I’m in no position to talk about the veracity of their accents). Oyelowo has a captivating presence and Nyong'o manages to channel the stresses and humiliations of poverty into a powerful performance. And together they create the space for wonderful newcomer Madina Nalwanga who plays Phiona to give a performance that left everyone a little welled-up at times.

“I was shocked that this was coming from Disney to be honest. It speaks to how important diversity actually is. If it weren't for that Ugandan exec at Disney I'm sure this would never have happened—or at least not on that scale.”

...I loved the fact that the children were from Katwe or from around Katwe and they were given the chance to tell their own stories which is something Africans don't often have the opportunity to do in Hollywood."

This is a Disney film, so if you're allergic to sentimentality, no amount of authenticity is going to get you through this. The story drags a bit toward the end, where the cycle of setbacks and victories gets a little monotonous, but overall The Queen of Katwe is a remarkable movie about triumph and spirit and all those things that you want in a Disney movie but with the kind of eye for detail you’d expect in a Mira Nair joint.