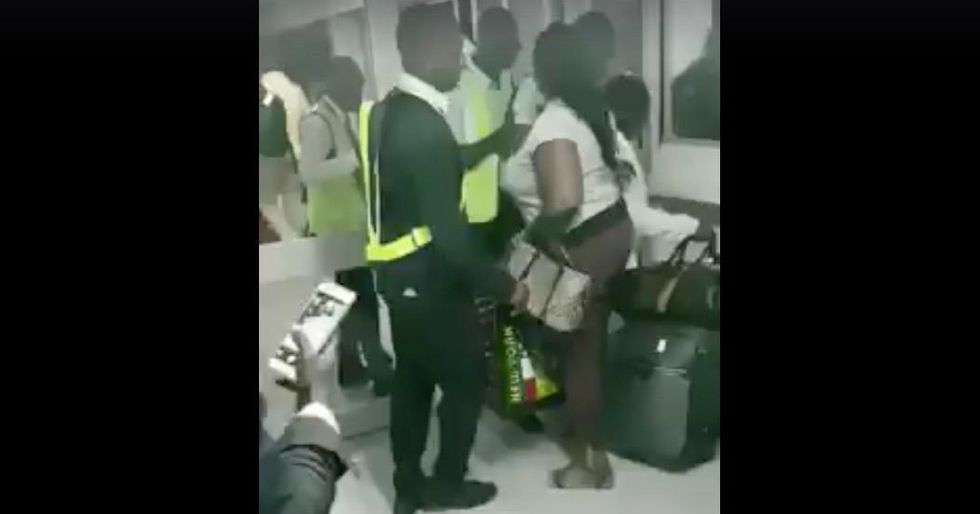 Kenya Airways has apologized after a video surfaced of flight crew manhandling a female passenger.

A video circulating on social media shows a woman being manhandled by Kenya Airways staff, while attempting to board a flight from Accra, Ghana,  Nairobi News reports.

A short clip shows two women engaged in a heated argument with several members of the flight crew, before one of the women is forcefully pushed to the ground. Others can be heard in the background shouting at crew members to stop. The video was originally posted on Facebook by Pearlyn Adwoa Budu, who wrote that the flight had been delayed for two hours with no status updates or acknowledgments from the airline. The incident occurred after the unidentified woman brought up the issue with airport staff, which ended in her being violently removed from the flight.

The tactless exchange can be seen below:

The video has been widely shared on social media in an attempt to bring attention to the incident, and force Kenya Airways to act.

Dear @KenyaAirways This is totally unacceptable! Nooo😡😡😡😡!! This nonsense must Stop! #KenyaAirwaysSaga Retweet till we get justice for her!! pic.twitter.com/2TqQnPn16g

Kenya Airways issued an apology on Wednesday, stating that they had identified the passenger and are opening an investigation the incident to reach a "fair and proper conclusion."

“We have identified the lady in the video, retrieved her contact details and are currently making efforts to reach her. Kenya Airways condemns all abusive and violent behaviour and will continue to join you and the rest of the world to promote safety and respect in society,” read a statement posted on their Facebook page.

This type of mistreatment of female passengers on commercial flights, sadly, does not appear to be an isolated incident. Last week, a Ghanaian women was assaulted by an intoxicated white man, while airport staff stood by.