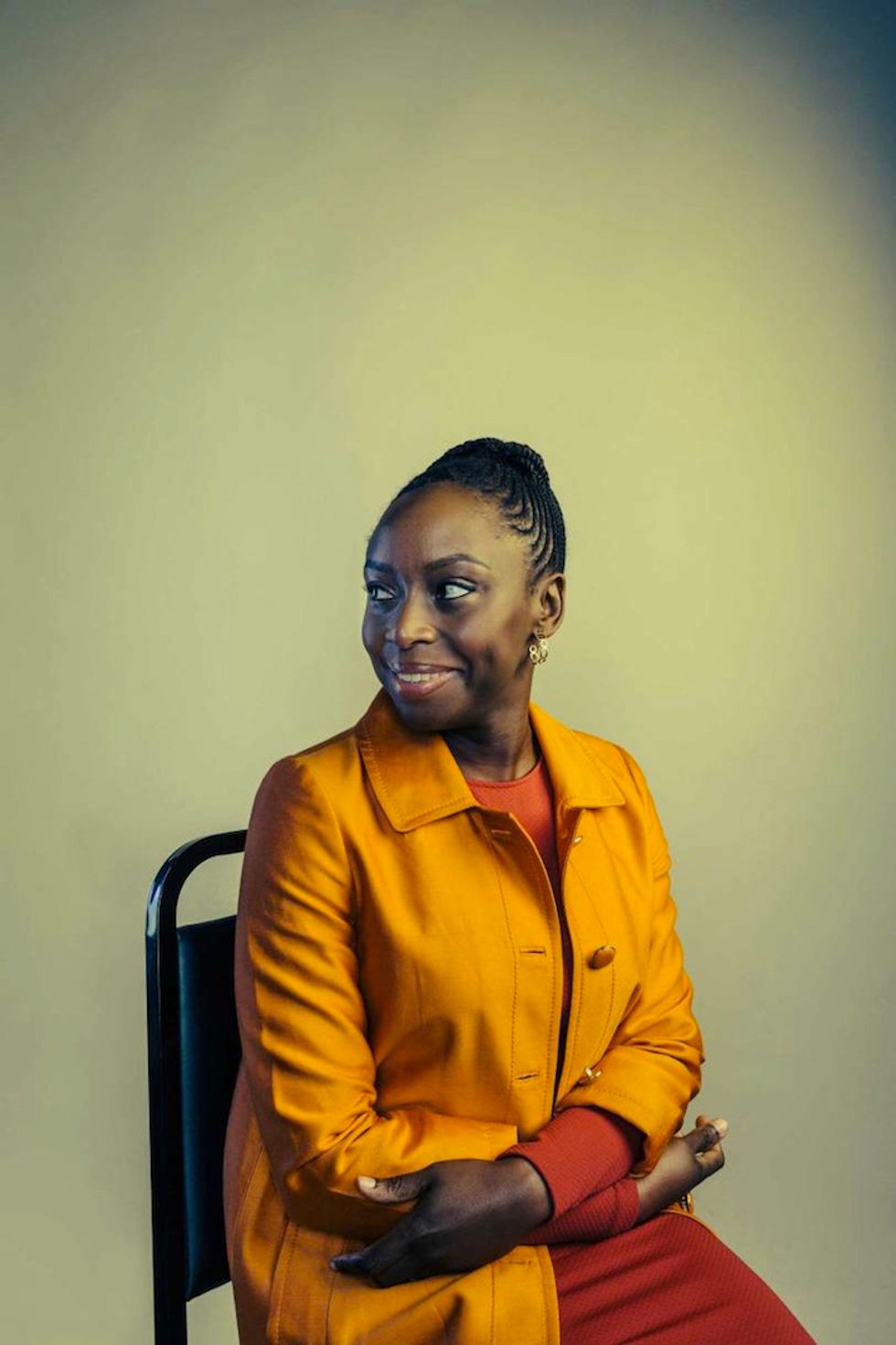 "Chris Ofili’s extraordinary talent is to speak about contemporary issues through the romance of painting. He achieved early success in London—winning the Turner Prize and representing Britain at the Venice Biennale—almost as soon as he emerged. With works like No Woman, No Cry and The Holy Virgin Mary, both breathtaking and controversial in equal measure, he positioned himself as an artist who could redefine art practice by affirming the relevance of painting for the 21st century. Since moving to Trinidad, he has drawn inspiration from the island, its natural beauty and its distinct cultural tropes. Incredibly, he has re-emerged with an equally powerful relevance. In his work, he seeks to speak to political issues; his is a social imperative. He asks questions about our time through intoxicating visual compositions that examine peripheral modernities and enable us to make sense of our world."

"It’s the rare novelist who in the space of a year finds her words sampled by Beyoncé, optioned by Lupita Nyong’o and honored with the National Book Critics Circle Award for fiction. But the Nigerian writer Chimamanda Ngozi Adichie is just that sort of novelist. A MacArthur “genius” grant recipient, Adichie writes of the complex aftermath of Nigeria’s colonial history and her nation’s rise to prominence in an era when immigration to the West no longer means a one-way ticket. With her viral TEDxEuston talk, 'We Should All Be Feminists,' she found her voice as cultural critic. (You can hear it rising midway through Beyoncé’s woman-power anthem “Flawless.”) She sets her love stories amid civil war (Half of a Yellow Sun) and against a backdrop of racism and migration (Americanah). But her greatest power is as a creator of characters who struggle profoundly to understand their place in the world."

"Muhammadu Buhari made history in March by becoming the first candidate to oust a sitting Nigerian President through the ballot box. Now he has to live up to voters’ expectations. From battling the Boko Haram insurgency to tackling endemic corruption, Buhari has many challenges ahead. The greatest may be overcoming his past as a military ruler who seized power in 1983. Already the born-again democrat is demonstrating the inclusivity necessary to lead a nation riven by ethnic and religious tensions. 'We must begin to heal the wounds and work toward a better future,' he said in his April 1 victory speech. 'We do this first by extending a hand of friendship and conciliation across the political divide.' It’s a promising start for a President-to-be who wants to leave a legacy to match the historic conditions of his election."

"Like northern Uganda, where I live, northern Nigeria is very isolated. For many years, the women who were abducted from our region remained invisible. So although I have not met Obiageli Ezekwesili, I know the #BringBackOurGirls campaign that she championed is very important. It would have taken a long time to raise awareness about the girls taken by Boko Haram without her using her platform as a former Minister of Education.

We need to remember that these girls are undergoing psychological and maybe physical torture. So I love that the campaign says, 'Bring back our girls,' and not 'Bring back my child.' Everybody is in unison with the parents and the relatives. Everyone is feeling their pain. Everyone will be ready to embrace the girls and offer them care and compassion if they are rescued or manage to escape.

It has been a year, and the girls haven’t been rescued, but she has made a difference by speaking about it. Not just speaking but shouting. I know some people will say she is too loudmouthed. The loud mouth is needed. People hear it."