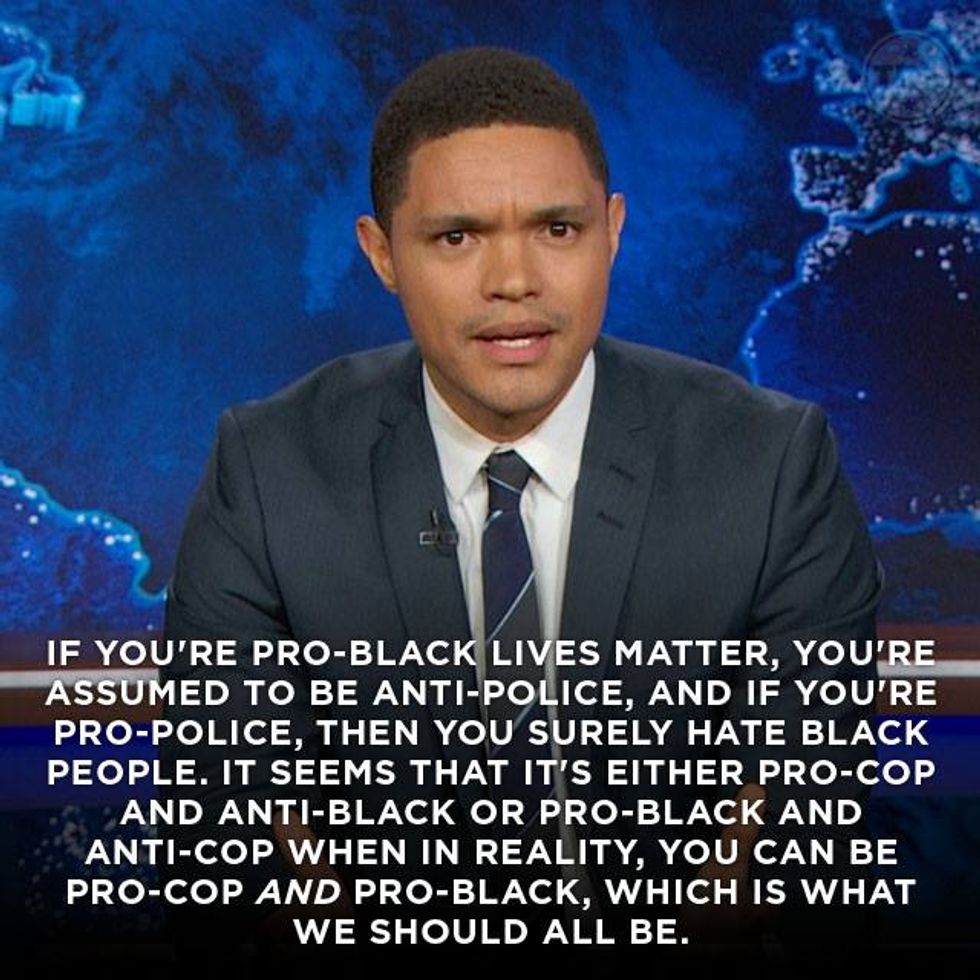 The Daily Show’s Trevor Noah talks candidly about police brutality in America and the shootings of Alton Sterling and Philando Castile.

If you watch one late night video this week, let it be this. In a poignant monologue from Thursday night’s episode of The Daily Show, Trevor Noah eloquently called bullshit on America’s police force.

The South African comedian began by asking viewers if they saw the shooting that happened two days prior, referring to the police shooting of Alton Sterling, a 37-year-old black man in Baton Rouge, Louisiana. “Because don’t worry, if you missed it, there was another one yesterday,” added Noah of the death of 32-year-old Philando Castile in Falcon Heights, Minnesota. “Two videos in two days. Of police fatally shooting two black me. Who, when you watch the video, did nothing to warrant them losing their lives.”

The hardest part about having a conversation surrounding police shootings in America, Noah went on to say, is that it’s either one or the other. If you take a stand for something––whether that be cats or dogs, Red Sox or Yankees, lol or hahaha––you’re automatically against something else, he said. Noah responded with a plea:

“With police shootings it shouldn’t have to work that way. For instance, if you’re pro-Black Lives Matter, you’re assumed to be anti-police. And if you’re pro-police, then you surely hate black people. It seems that it’s either pro-cop and anti-black, or pro-black and anti-cop. When in reality, you can be pro-cop and pro-black. Which is what we should all be.”

“You shouldn’t have to choose between the police and the citizens that they are sworn to protect. What makes these incidents even more painful is the fact that there are people who don’t even think that this police problem even exists.”

Seeing is believing, he continued. And yet when it comes to videos of police shootings, seeing isn’t believing. “Why is the video never enough?” he asked.

“It’s a truth. I shouldn’t even be afraid to say it. America has a problem within its police force. And although this is a problem that disproportionately affects black people, it’s not just a black problem. This is an American problem… Everyone is involved. And with all this evidence on video, surely the least America can expect from its police is for them to admit that there’s a problem. You can’t fix something until you admit that it’s broken.”