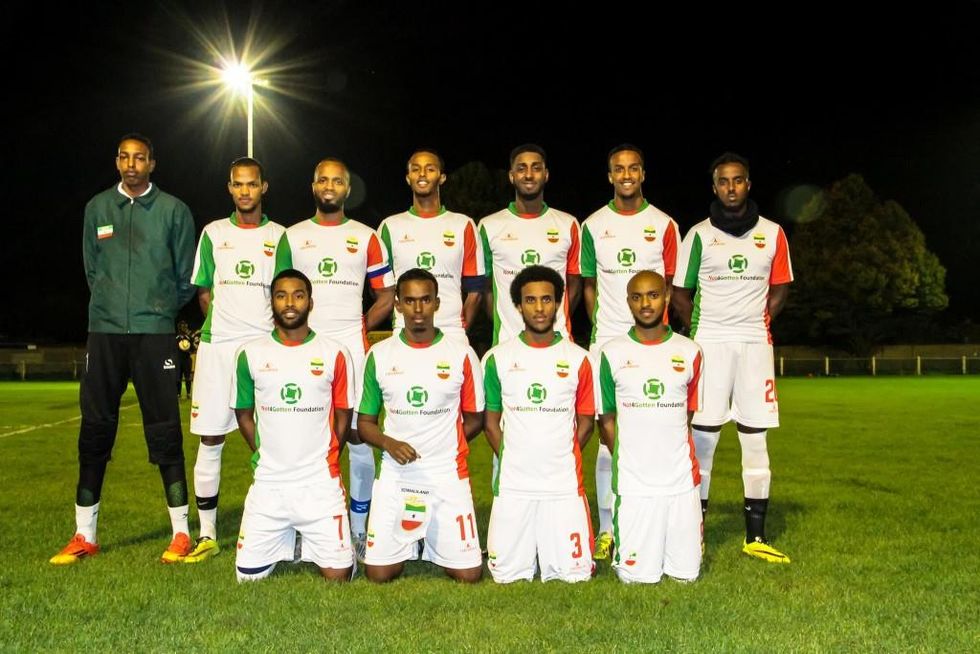 Although knocked out of the competition early, Somaliland and the Chagos Islands played to show they existed at the 2016 ConIFA World Cup.

The second ConIFA World Cup, an international soccer tournament for stateless nations, unrecognized countries, and all of those who feel they deserve a national team, but can’t be accepted into FIFA—and world football—occurred last week in Abkhazia.

Abkhazia is internationally recognized as a semi-autonomous region of Georgia, a country in the Caucasus, but it is completely controlled by an independent government, and Georgia bans travel across their border.

As is the case with the hosts, the other teams in the World Cup represent countries, or people, with complicated legal situations and intricate international diplomacy. But ConIFA and its World Cup push forward under the philosophy that not being part of an internationally recognized country should not stop you from enjoying some good and wholesome international football.

The competition, which was eventually won by Abkhazia, saw the emergence of a few favorites: Northern Cyprus—a self-declared independent country in the mostly Turkish northern part of Cyprus, Iraqi Kurdistan, and Panjab—a team representing the Punjabi diaspora from northern India and northern Pakistan to the United Kingdom—who lost the final to the hosts in a thrilling game decided by penalties.

However, the two African representatives in the tournament, Somaliland and Chagos Islands, did not do so well, as both finished in the bottom four (out of 12 competing teams). Chagos Islands, in particular, had a tough tournament, as they lost both their games against Abkhazia and Western Armenia by a combined score of 0-21. Somaliland didn’t do much better, also losing their two games against Panjab and Sápmi—a team representing the indigenous Sami people from the region along the borders between Sweden, Norway, Finland and Russia—but by a combined score of 0-10.

Both African teams were eliminated from title contention early, but they got to play two more games, in the “placement round,” to decide the final ranking at the bottom of the table. But, for both teams, participating in this tournament was about much more than the disappointing results on the field. It was about raising awareness of their national identities, of their very existence, despite it often not being recognized.

For Somaliland this might be of vital importance, as this World Cup is one of the few international instances where they are recognized as a country. No other country in the world recognizes Somaliland as a nation and, instead, it is treated as an autonomous region in northwestern Somalia.

Somaliland declared its independence in 1991 after the Somali civil war had broken out in 1988, and now claims the territory that was once part of the British Somaliland protectorate. Despite of their government controlling most of the area that it claims, and of being comparatively more stable than the rest of Somalia, the unrecognized nation has not managed to change its status as an international pariah.

Yet, the Somaliland team might help to change that. The team was created in 2014, and its first victory came at a friendly in Sweden—where a sizable Somali community lives—against a local amateur team. The game was attended by Somaliland’s Foreign Minister, Edna Adan, who gave a speech before the game.

Even if the team is not yet ready to compete at this level, the country’s officials are certainly ready to use it as a national symbol and a way to differentiate themselves on the international stage from Somalia. Or, as Adan put it after that game in Sweden: “Twenty-five years ago we separated from Somalia, and since then we have promoted peace and democracy, so that refugees will have someplace to return to.”

For Chagos Islands, their national identity is a particularly thorny issue—as Chagossians have been barred from their own homeland since the 1960s and their football team is one of the last mechanisms they have left to fight to keep their culture and nationality alive.

The Chagos Islands, an archipelago of atolls in the Indian Ocean between Mauritius and the Maldives, were settled in the 18th century by the French and then ceded to the British in 1814. The British and the French brought people from Mauritius, Madagascar, Mozambique, India and the Malay world as slaves or workers. These people mixed and created a distinct island culture known as Îlois, or “Islanders” in French Creole.

In the early 20th Century, the Chagos Island were part of the British Empire, administered from Mauritius. However, by 1964 the United States was looking for a place to build a military base in the Indian Ocean, and decided that Diego Garcia, the largest atoll in the Chagos Islands, was the ideal spot. The U.S. negotiated a lease with the U.K. to be able to operate in the islands. But two problems remained: Mauritius (and thus the Chagos Islands) was about to become independent, and the U.S. needed its base to operate in an uninhabited territory.

The U.K. solved the first problem in 1965 when it decided to create the British Indian Ocean Territory (BIOT), detaching the Chagos Islands from Mauritius, against UN decolonization rules. Then, both countries worked to solve the second problem by forcibly displacing the entire population from the islands. They did this first by denying reentry to those who had left the islands, then by murdering their pets and blocking their food and medicine supply.

“British agents, with the help of Navy Seabees, quickly rounded up the islanders’ pet dogs, gassing and burning them in sealed cargo sheds. They ordered... the remaining Chagossians onto overcrowded cargo ships. During the deportations, which took place in stages until May 1973, most Chagossians slept in the ship’s hold atop guano—bird crap. Prized horses stayed on deck. By the end of the five-day trip, vomit, urine and excrement were everywhere. At least one woman miscarried. Arriving in Mauritius and the Seychelles, Chagossians were literally left on the docks. They were homeless, jobless, and had little money, and they received no resettlement assistance. In 1975, the Washington Post broke the story in the Western press and found them living in ‘abject poverty’. Most remain deeply impoverished to this day.”

The U.S. built its base named The Footprint of Freedom, and the U.K. received $14 million in compensation. Meanwhile, the Chagossians had to resettle in Mauritius, Seychelles and the U.K., and fought to gain their land back, or at least be compensated. Unfortunately, the U.K. and the U.S. have come together again to prevent this from happening.

The Chagos Islands team, established in 2003 in Crawley, England—where the islanders have a president in exile—is just one of the small battles in the huge struggle of the Chagossians to reclaim their land. Just participating in the World Cup is a great feat.

ConIFA is a small organization and it doesn’t offer funds to help the teams the to the tournament. The teams must pay for the trip themselves. That’s why the Chagos Islands FA had to set up a crowdfunding campaign to help them finance their trip. Unfortunately, they only got to 32 percent of their expected £3,000 and could only bring 13 players to the tournament.

But despite the small budget and the dismal performance on the field, Chagossian players can be proud to know that they helped bring an eye to their decades-long struggle.

Even if on the pitch they mostly served as the host’s victims:

Chagos Islands and Somaliland faced each other on the first placement round, where Somaliland grabbed a 3-2 victory. Somaliland went on to place 10th after they were defeated in the second placement round by Székely Land—an area of Romania mainly inhabited by Hungarians—by a score of 3-10. The Chagos Islands finished dead last at 12th as the result of a defeat by penalties against Raetia—an Ancient Roman province that still maintains its cultural identity and its own language within Switzerland—after a game that ended 3-3.