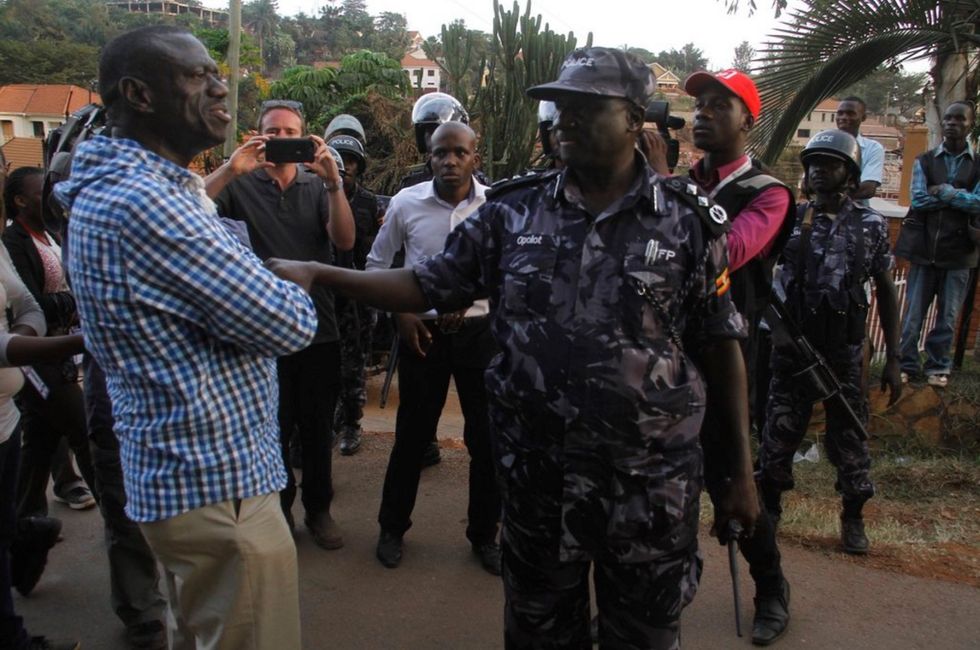 During Thursday’s elections in Uganda, police briefly detained Kizza Besigye, the leader of Uganda's largest opposition party, the Forum for Democratic Change (FDC), just before the end of voting.

“Besigye has been grabbed from the town and thrown at his residence,” FDC spokesperson Ibrahim Ssemujju told Okayafrica in a phone interview. “It is the most poorly organized election we have witnessed. We are dealing with the gunmen around us, the people are panicking and they have messed up the whole election. I don’t know what to do.”

The electoral commission extended the voting time because of the complications in transporting electoral materials which caused the delays.

“There has been violence and some chaos in the parts of Kampala where there is a lot of opposition support. Many people didn’t get to vote,” said Ignatius Bahizi, a BBC reporter we reached in Kampala.

At least two polling stations in the city cancelled voting after clashes with police and accusations of the distribution of fake ballots. According to the Ugandan electoral commission law, the official result will be announced within 48 hours after the polls close, but as results are coming from different parts of the country, there may be a delay in the announcement of the election winner.

“The polls were supposed to open at 7:00 a.m., but so many voters couldn’t imagine how most of the poll offices didn’t open until 12:00 p.m.,” Bahizi said, “And the distribution of the ballot papers and all polling materials went until 3:00 p.m. Because of frustration, many people went back home without voting, accusing the electoral commission of doing that deliberately.”

Officials in the ruling party ordered for popular social media platforms to be shut down. Police and the army closely controlled the avalanche of negative messages campaigning against current president Yoweri Museveni. "Some people misuse those social media—telling lies,” Museveni told the media in Kampala after he voted today. “If the people want a right to use the social media, they need to use it properly.”

Many Ugandans who live in Kampala decided to go to vote in their village fearing the violence that may happen after the elections. “The supporters of Besigye are becoming more fearless and express their anger against the police and army,” Bahizi said. “They know well that even if Museveni loses the elections he wants to win using all the forces, they are complaining, they may come into the street and protest. Ordinary police and army are carrying heavy guns, in all the streets of Kampala, it looks like the country is at war. There’s no movement in the streets. No cars. No people.”

Ugandan police and army are deployed in every corner of the capital Kampala. Besigye’s supporters and volunteers stayed at their party’s headquarters, where they are receiving results from different parts of the country. “We can’t get out of our headquarters, because we don’t know how the situation will develop, we can’t take that risk, we want to stay safe,” Ssemujju said. “Once you are dealing with these African dictators, there is nothing impossible; he can lose the election and proclaim himself the winner, we don’t expect that Museveni can have that courage and handover the power to us peacefully; he is controlling the elections and and he has the power to influence the results at every stage.”

Around 15 million registered voters attended at least 28,000 polling stations across the country to vote for their parliamentary and presidential candidates. The earliest provisional results by the electoral commission put Museveni in the lead at around 67 percent and Besigye is in second at around 32 percent. The only woman in the presidential race, Maureen Kyalya Waluube, currently is in fifth place with 0.62 percent. Despite the ban on social media, Ugandans are managing to post under the #UgandaDecides hashtags using VPNs.

See some of the tweets below:

Here's President Museveni's official communications person seemingly advocating for the use of VPNs to circumvent the social media blockade:

The scene outside Besigye's compound:

Benz found with boxes with ticked ballot papers in favour of Museveni, destroyed at Dispensary Polling Station in Kajjansi #UgandaDecides

Placide Magambo is a multimedia journalist and researcher with experience working for large international organizations and various New York and African media outlets.