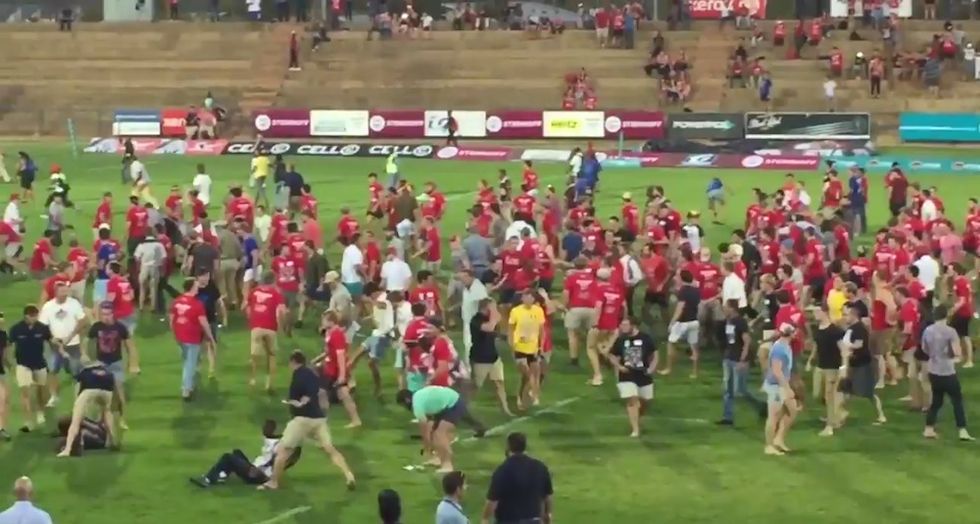 A violent scene unfolded Monday at the University of the Free State in South Africa when black students and workers disrupting a rugby match were attacked by white students.

Workers have been protesting to end outsourcing at the Bloemfontein university since last Thursday. Monday afternoon a group from the South Africa university protests took to the field during the 17th minute of an on-campus rugby match. Spectators ran onto the field and began beating the protesters.

Videos footage of the horrific scene began circulating on social media shortly after.

Look how we were outnumbered.They were hitting even the females Four of our mothers & sisters are in ICU as we speak pic.twitter.com/9eIG0PfOUt

The South Africa university protests led the school to announce closures on Tuesday and Wednesday. “The decision was made due to the strike of outsourced contract workers. Some students on the Bloemfontein Campus joined the strike today by protesting on campus,” the university announced in a Facebook post on Monday. “The safety of staff and students is the priority of the senior leadership and this is why a decision was made to close the two campuses.” Meanwhile at the University of Pretoria (UP), protests and clashes continued over the institution’s proposed amendment to an English-only language policy in which Afrikaans and Sepedi languages would be used for additional support to students in tutorials and practicals. 27 UP (Tuks) students were arrested during the protests last Friday. Protesting students declared Monday #UPBlackMonday and many wore black as they marched from their campus to the Pretoria Magistrate’s Courts to show solidarity with the 27 arrested students.

The #TUKS27 is made up of Masters students,Honours Students, Students on their Second degrees and most graduating in April. We are Not thugs — Accused 10 (@ThoLI_Tee) February 22, 2016

Open Stellenbosch responded to Monday’s events with a message of support for students at both universities. “We are very worried about the safety of black students and workers at the University of Free State (UFS),” the group wrote in a Facebook post. “Black students who stand in solidarity with outsourced workers at UFS disrupted a rugby match and were eventually attacked by white students and their parents. Once again we witness a violent attack of racism on black students by those who couldn’t care about the workers (mainly black women) who cook them food at Res, clean their rooms and lecture halls.”

This is a developing story. We will update the post as more information becomes available.

Where is Jonathan Jansen? Why are there armed white racists beating up black students on his campus? #UFS — AFRICA IS A COUNTRY (@AfricasaCountry) February 22, 2016

If you are not worried about what happend at #ufs as a black person, im worried about you. — Brr. (@kAbeLo_Phuti) February 23, 2016

Can we take a second to acknowledge that the #UFS rugby game continued 45 min after the brutal attacks on black bodies. Rugby > black pain — Farai Mubaiwa (@Feminist_Farai) February 22, 2016

Some of the protestors who were beaten during their disruption of the Shimlas #VarsityCup match at #UFSpic.twitter.com/t4uCRtoE2c — OFM News (@OFMNews9497) February 22, 2016