The Black Indie Artist You Need to Listen to This Month: Vagabon 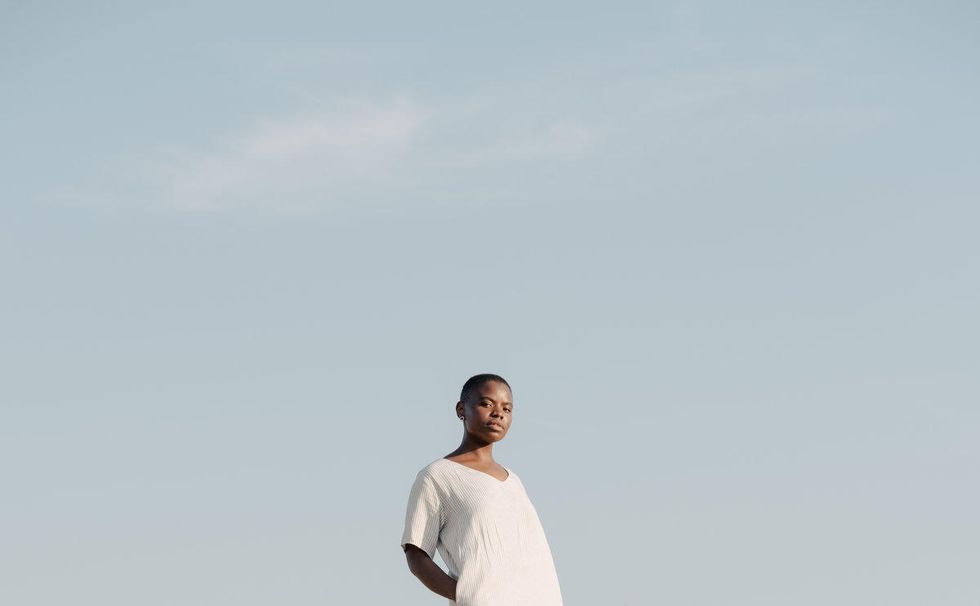 Special people have the hardest time. They see so much, are aware of so much. And indeed, Vagabon is special.

Through her music, she tries to bring together everyone who is as complex as her, and who may not be allowed to be themselves fully in some spaces.

The Cameroonian-born singer-songwriter Laetitia Tamko is touring Europe for the first time following the release of her debut album. She's had a whirlwind year, gaining international praise while dealing with the seeming responsibility of representing black girls in the indie rock scene.

In her debut music video, "The Embers," Laetitia is elevated, uplifted even, by a bunch of half-naked white men wearing masks. It's a stark contrast from your average music videos (rock music or otherwise) where we seldom see black women and the ones we do are overly sexualized for male consumption, when they're simply not invisible. Vagabon had a very clear idea of what she wanted to shoot: "When we did the pool scene I wanted to feel like a queen among these men and for them to understand how lucky they should feel to uplift me. I wanted to sit on top of them while they wear sleeping masks so that their identity is hidden. The music video is not about them. They don't matter that much."

Her message is clear: Black women are queens and the people holding us down can lift us up.

Laetitia lived in Cameroon until she was fourteen. Her time there had an impact on her voice as a musician. As she explains, "friends of mine who've only lived in the US see things differently from me."

It's not common to be a migrant from an African household and to make indie rock. Thankfully, she had the support of her family: "my parents are proud of what I do, but they've never seen anything like that before. I used to play music secretly and eventually, once I started to be successful, I had to show how serious I was with my craft. They saw me play a gig in front of 1000 people and later on, asked me if they were my friends, as a joke."

Contrary to other musicians in the scene, she didn't grew up listening to only rock bands. In fact, as she mentioned matter of factly: "I don't listen to the Beatles." Growing up, she was more of a fan Usher, Mariah Carey or Manu Dibango.

But things changed three and a half years ago when she released her music online. It was part of an healing process, yet a community grew around her, supporting her and sharing her songs. Back then, she didn't know much about music, let alone owned a guitar. Yet, she taught myself how to play, write and produce songs. Her debut album, Infinite Worlds, came together in her bedroom. Remembering that time, if she had any word of advice, it would be this one: "it's okay to suck for a while. One advice I'd give would be to stay ready so that you don't have to be ready."

She picked the name Vagabon as a pun to the nickname her mother used to give her as a child, who used to wander around: "une vagabonde." Vagabon grew through word of mouth and people had no choice than to notice her. Laetitia signed a record deal with a indie label, Father Daughter Records, and dropped her first album in February this year.

While working on her music, Laetitia was studying a double major in electrical engineering. Early on, it had forced her to be put in a situation where she was always outnumbered, seldom saw people looking like her in this field and she had to fight to be heard. "People expect engineers to be male and it taught me how to get past their expectations to do what I have to. I try to be resilient, talk more and affirm myself more."

An experience not really different from what it's like to be an African woman making indie rocks. Surprised faces are, unfortunately common when she plays gigs with people wondering what she's doing here, or if she's a hip-hop or neo-soul artist. But their reactions are, more than anything, a reflection of their small mindedness, and says nothing about her talent. She often asks them in return: "Why are you shocked? Do you think I'm one dimensional?"

But Laetitia evolves in many different spaces at the same time: as a migrant woman, as a Cameroonian, as an American, as Vagabon. She is painfully aware of the pressure that comes with being a black artist in a white washed indie rock scene. As a young artist, there's a novelty in being visible but it's also a downfall. "Me being a musician means that I have a platform, but I'm not an activist. In addition, black people don't own the music industry. I need power to talk about these issues without losing the small platform I have. If Solange is performing and says "Black women are everything", the audience will stay. If I do that, they may leave."

Vagabon has poise and maturity but she's still a 24-year-old woman trying to figure things out. Someone who's still processing so much of the complicated political times we're living at the moment. Putting musicians on a pedestal, and to a bigger extent artists, and to pressure them to speak on political issues, making them political activists by default, is a slippery slope. It's expecting them to release a statement on political issues instead of starting a discussion, and who knows, maybe encouraging them to be educated themselves on some issues. "Life is a constant craft," Laetitia adds.

Vagabon is not the first black woman making indie music, but she is visible. And it made her realize why some artists refrain from speaking on issues. Too many expectations, too much responsibility on their shoulders, especially for the ones who aren't established yet. Vagabon makes music for everyone but Laetitia is a Cameroonian woman and you just have to see her on stage to understand that, people politicize her music. But seeing on her stage makes it clear she also represents black women and people of color. She faced backlash after saying in an interview that she made music for black women. Some people even accused her ofdiscrimination. It's a ridiculous idea to think that there's not enough room in this industry, that people feel threatened because she wants to uplift black women. "I don't need to comfort people who are mad. There has been space for them all this time. We can all share. No matter what they think, it's important for me to scream that I'm a human being and will be treated as such."