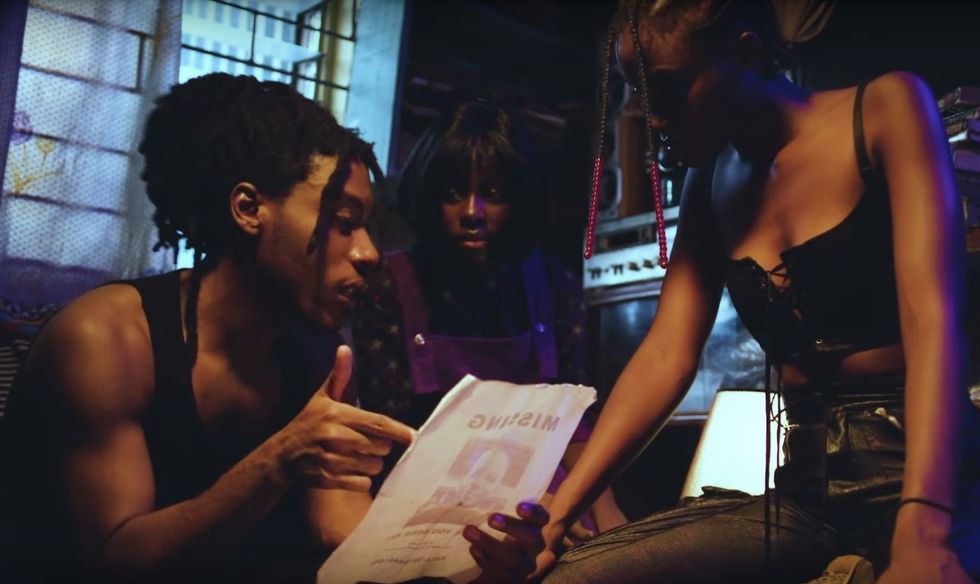 The artist once again draws inspiration from Nollywood horror in the self-directed video.

Santi has taken his already memorable music video offerings to another level, releasing a short film as the music video for his latest single 'Raw Dinner," featuring Kida Kudz from his debut album Mandy and the Jungle.

Constantly drawing inspiration from the Nollywood horror films of the '90s—which he also referenced heavily in the video for last year's "Freaky"—the artist produced an 8-minute short with dark and stunning imagery. The self-directed and self-written video, follows a girl named Luna who possesses supernatural abilities. She joins Santi as they embark on a mission to find Kida Kudz who has mysteriously gone missing. They are then joined by another girl named Erin, who turns out to be even more otherworldly than originally thought. "Then again there is a certain type of darkness, gifted to you without explanation or purpose," says the film's narrator as the camera captures shadowy shots of terror, zombies and exorcisms.

The artist has given the film, a full movie rollout, teasing its release on social media with a movie poster, complete with acting and production credits on Friday, and dropping a spooky trailer last weekend in anticipation of its release.

"Raw Dinner," is a bold production, which features narration by veteran Nollywood actor Carol King, as noted in Konbini.

Santi continues to make a name for himself as not only one of the leaders of Nigeria's alté movement, but also as a formidable director. In addition to directing his own videos as well as videos for frequent collaborator Odunsi, it was announced earlier this month that the artist will also be direction the music video for American rapperGoldlink's music video "U Say" featuring Tyler the Creator and Jay Prince.