What is a Great Nigerian Party if Nobody is Spraying Money?​ 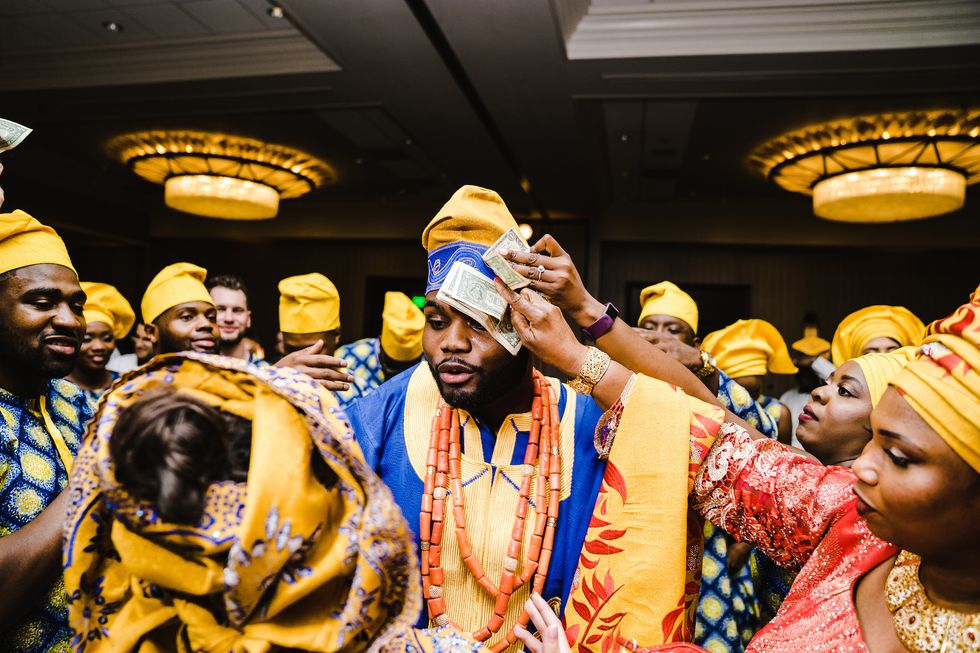 We look at the beloved West African tradition of spraying money or, as Americans might know it, "making it rain."

It's a sunny afternoon in Lagos and the car park of Havilah Event centre in Oniru Estate, a highbrow residential area a few meters away from the Lekki Toll Gate in Victoria Island is filling up with vehicles of varying grades with models ranging from Range Rovers to Prada Jeeps. A couple of Lamborghinis and Ferraris drive in swiftly.

The wedding is a union of two eminent families, the family of Chief Obi Williams and Honourable David Adebanjo. The bride and groom are from South-Eastern and South-Western Nigeria respectively. The reception hall is big, a 500 capacity space draped with the bridal colour theme which is yellow and teal green. The décor of the hall is electrifying with the yellow rose petals that are deployed to style the chairs and tables and adorn the walkways and couples' section. The guests strut in rocking the "Asoebi," the same colour as the bridal theme. The asoebi is sewn in different styles of "Iro and Buba" by the women and "Agbada and Danshiki" by the men.

The MC of the event is Boniface, a comedian who is notorious for his hilarious skits about market women. Guests are spoilt for choice by the 3-Course-Meal options on the menu which had a variety local and intercontinental delicacies with sizzling aroma; gizdodo, catfish pepper soup, asun, jollof rice, amala and ewedu, pounded yam and egusi soup, lasagna, Chinese fried rice, pork and potato salad, Singapore noodles, fish and chips, chicken wings and more. Then the newly wedded couple are ushered to the dance floor where a live band plays covers of various Highlife, Fuji, Gospel, Juju, Hip-Pop songs. Afterwards, family, friends and some members of the bridal train join them on the dance floor.

While the younger folks dance vigorously trying to outshine each other, the elderly ones just sway lightly to the tune of the music, pressing freshly minted notes of five hundred naira, one thousand naira and some denominations of dollars and pounds on the heads of the bride and groom. There are two ladies picking the crisp notes of money from the floor and putting them inside multi-coloured polythene bags. Others focus on the live band, spraying money on them as they hail and sing their adulations. A group of young men choose to "make it rain" by throwing bundles of cash in the air. This creates a scene in the party as people scramble to catch the floating wads of cash and get their own share of the national cake.

Though it is claimed widely that "spraying money," is an African custom especially among Nigerians known for their lavish parties but it exists in a lot of places, not just West Africa. A tradition similar to spraying money can be found in Poland. This typically involves the best man dancing with the bride, her bridesmaids and pinning money on her wedding gown or putting it directly in a purse carried by either the bride or other ladies specifically for this purpose.

Among Ukrainians, the bride's veil is detached and given to the maid of honour, then an apron is placed on the bride which is employed to receive money sprayed during the dance. Also at Portuguese and Hungarians weddings, the bride's shoes are taken off her and place at the centre of the dance floor. Then the shoes moved around amid the guests, for each person to deposit a sum of money for the couple.

In the US, spraying of money is synonymous with the phrase "Making it Rain" especially within the African-American community. It is a time revered tradition known as the act of spraying money on strippers. At these strip clubs, athletes, celebrities, rappers throw crazy sums of money on ladies who entertain with their pole dancing services.

Recently Nigerian-American rapper, Wale suffered a heated backlash for a video he posted of his daughter being "sprayed" at her birthday party. The video showed Wale's daughter, Zyla Moon Oluwakemi in a heap of dollar bills with an Instagram inscription, "My fine girl at her Bday Party the NG way." But many social media users misconstrued the act, speaking nefariously about the video. "What do you think about the negative message that the girls will learn at an early age..shit, one little girl already knew what to do with the money, making it rain and picking it up," said a user.

Wale hit back at the critics, saying most Americans were ignorant about other cultures outside their country. "That's just a little bit of that ignorance you get in this country [the US] sometimes, for other cultures. I'm used to it."

"You've just got to respect other people's traditions on all levels before you speak on it. I'm proud of where I come from. That's just what we do, that's all I knew from when I was growing up."

The ways of spraying money at parties has evolved over the years, with individuals developing creative ways of showing off flagrantly on either a musician who is singing their praises or the hosts of the event who maybe killing it with some badass dance steps. My first experience with the gun-like money spraying machine is the 60th birthday anniversary of my aunt, Dr Kemi Martins. Beside, celebrating her diamond jubilee, she was also celebrating her appointment as the Commissioner of Health for the Ministry of Health, Lagos state.

As my aunt strode to the dance floor, she was swarmed by family, friends and colleagues who had graced the birthday party to rejoice with her. The guests with wads of cash sprayed Dr Kemi and her husband as they continued dancing. There was a potbellied man decked in an agbada sewn from Atiku guinea brocade. Then he stood at a vantage position, a few meters away from the dancing duo with the gun-like machine in his hands and crisp N500 and N1000 notes began to fly above the crowd of people on stage, subsequently cascading and falling on the celebrant, some of it sticking to the beads of sweat on her face.

The potbellied man undeniably arrested everyone's attention, even the celebrant; Dr Kemi became a spectator at her own birthday party.

Adenike Adeyemi, the CEO of Kolony Events believes the underlying reasons why individuals spray money is to create the "Owanbe" impression at parties and to have their egos pumped up by praise-singers. 'While it will no doubt draw more attention to individual, it can also pose as a threat especially in an event with poor security services.'

Though the Central Bank of Nigeria (CBN) has been campaigning against the abuse of the Naira, with penalties for anyone found culpable of this offense. According to Section 21(3) of the CBN Bill, it states, "For the avoidance of doubt, spraying of, dancing or marching on the Naira or any note issued by the Bank during social occasions or otherwise howsoever shall constitute an abuse and defacing of the Naira or such note and shall be punishable under Sub-section (1) of this section." If convicted the person risked six months in jail or a fine of N50, 000.

But the Nigerian culture has an indisputable flamboyance ingrained in it. Despite some tribal differences which exist amongst the Efiks, Yorubas, Kalabaris, Urhobos, Igbos, Fulanis and others, there is something we all have in common, we love to have to a good time and throwing cash in the air just creates that nostalgic feeling.