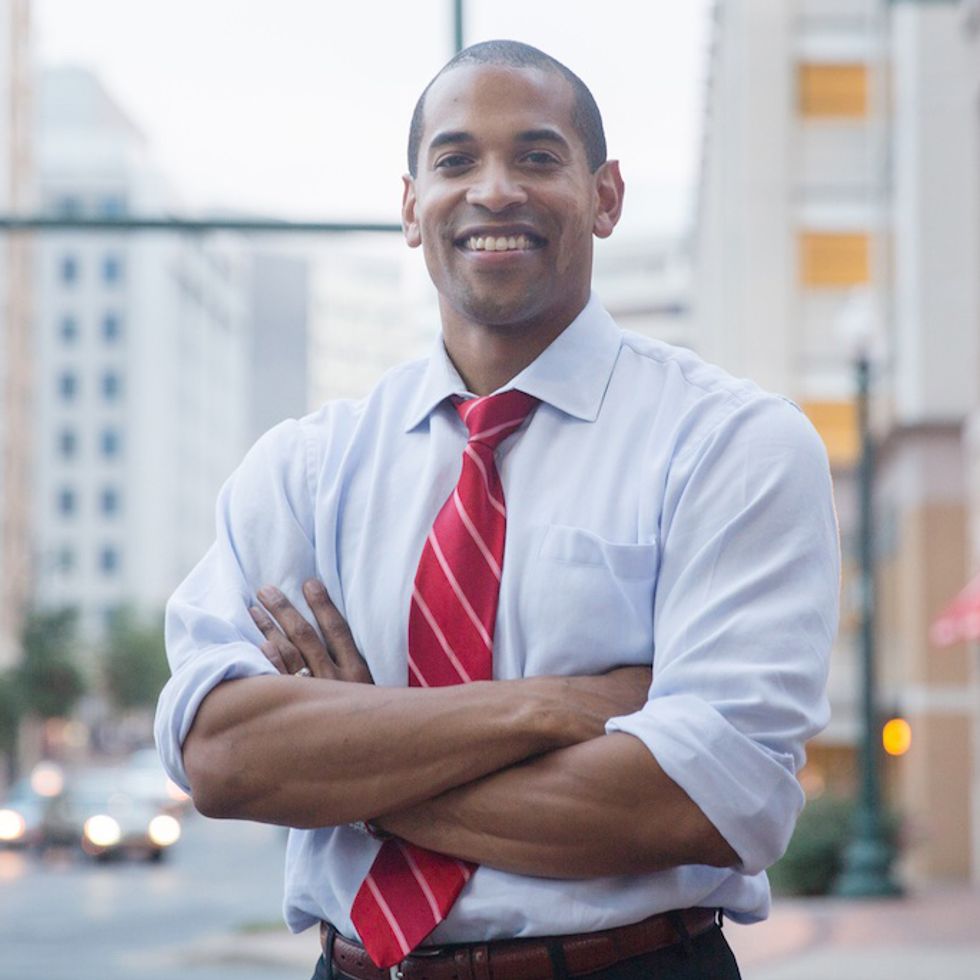 Will Jawando is running for Maryland’s 8th Congressional District and hopes to garner support from the African immigrant community.

Last Saturday, a group of African immigrants gathered to discuss rallying support for one of their own. At a time when the rhetoric coming from Republican presidential candidate Donald Trump is becoming increasingly xenophobic, the members of this group see their salvation in getting people who understand their plight into office.

William Jawando stands in their midst recounting a familiar story, the story of an African immigrant who strives to make it work in America and live his version of the American dream. This dream, most of them agree, could die if they do not have a voice to represent their interests. With fewer than 60 days left to the April primary election for members of Congress, Jawando tells his compatriots that his run for a seat in the United States House of Representatives, is geared toward making their voices heard.

The 33-year-old civil rights attorney, born and raised in Silver Spring, MD, is the son of a Nigerian immigrant who fled his home country on the heels of the Biafra War to seek opportunities in the US to live the American dream.

Like President Barack Obama, Jawando was born to a white American mother, but his father always ensured that he took him to Nigeria in an effort to instill a connection that would last a lifetime. Having been raised by parents of both black and white descent, Jawando feels a direct connection to the African continent while at the same time cherishing his American heritage.

“I'm an African-American: my dad is from Africa, my mom is American. I feel like I represent part of that community as I represent the American community," he tells Okayafrica in an interview.

“We all want to succeed, we all want opportunities—so I don't think it's a bad thing to talk about your heritage. That's what makes us Americans—we all have a different heritage. But we all come together and seek the common American dream."

Fatmata Barrie, a Silver Spring-based attorney originally from Sierra Leone, moved to the United States in 1984. For her, Jawando embodies what the community of African-American families are looking for in an advocate.

“I'm supporting Will because he's the right person for the job. He will take our voice as a community back to Congress," she says in an interview with Okayafrica.

Many African immigrants who support Jawando for Congress share Barrie's view, noting that by not getting involved in political decision making, especially at a time when there is so much political polarization in the country, they are risking the future of their children.

Jawando, who is running for a seat vacated by now senate candidate Chris Van Hollen (D) in Maryland's 8th Congressional District, made up of parts of Montgomery, Carroll and Frederick counties, served in the Obama administration and as legislative staff to House Democratic leader Nancy Pelosi, and is one of two African-Americans contesting in the district.

Jawando wants to be an advocate for African-Americans, but also for those living on the continent. According to him, investing in people on the continent results in good governance and better lives.

While working in the Obama White House, Jawando participated in setting up the inaugural class of the Young African Leaders Initiative, which brings hundreds of entrepreneurs, innovators and educators from across the continent to the United States.

This initiative, he said, is not only meant to help them network, but also to hear their great ideas and bring more to their countries by empowering them.

“We need to support that. As a member of Congress my role would be to incentivize and support that type of work," Jawando says.

“For years, things were taken from the continent and not given back. I think the best thing we can do is invest in the young people that are trying to improve these countries."

Jawando is a vocal advocate for reform in America's prisons, a place he describes as “bearing the legacy of slavery." He tells Okayafrica that America's original sin is rooted in segregation with the legalization of discrimination in laws such as Jim Crow.

Such laws, he said, segregated against Native and African Americans—leading to people profiting from forced labor—which draws a connecting line between slavery and the prison conditions today that allow for mass incarceration. The father of three said these unresolved issues prompted the birth of groups, such as the Black Lives Matter movement.

“All people, no matter what color you are can see that connection and abhor that's happening and I think that it's a bad thing and we shouldn't have the most people in jail," he tells us.

He worked on the Lilly Ledbetter Fair Pay Act and led the charge on education and healthcare. He stressed that he has an understanding of the world as a global citizen, adding that America needs leaders such as himself who understand and represent the diversity of the country.

Trump: the worst of America

Commenting on the seemingly divisive rhetoric of Donald Trump, Jawando stated that Trump does not represent the views of the majority of Americans, but seems to be exploiting discontent among some Americans, especially those who feel strongly about immigration.

“When the Irish, Polish and Jewish were coming over here, people didn't like them and it took time for that to happen. Now it tends to be people of color; Latino folks, Muslims and he's tapping into something that's been a part of America."

The Democratic candidate said the part of America that he and most people are focused on is the hope, opportunity and optimism that is America, adding that this is why people come to this country to find a better life.

“It is important that all of us that believe and get out and vote with our feet and with our voices and with our actual vote to show that that's not the America that we believe in," he says.

“We all come here trying to seek opportunity in the American dream and that's what I focus on and it's reprehensible what he's doing."

Out of the 200,000 democrats registered to vote in the district, Jawando needs 25 percent of that number in order to win the Primary. He thinks it is politically positive to reach out to people who he thinks his message resonates more with.

Wade C. L. Williams is an award winning freelance journalist from Liberia and a Hubert H. Humphrey Fellow at the University of Maryland, College Park.