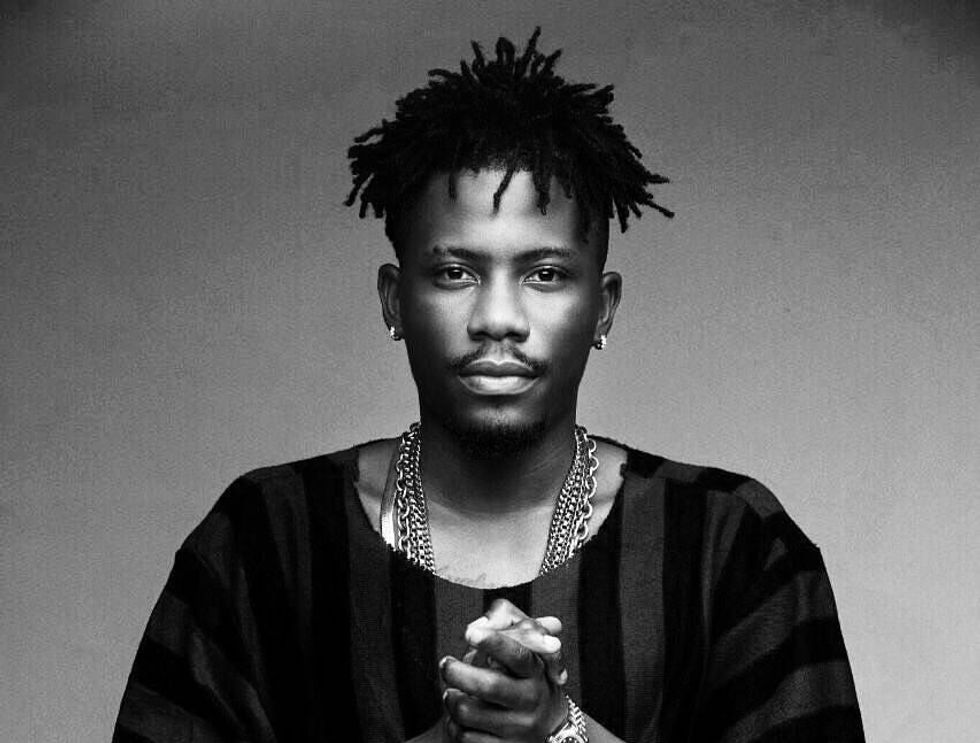 We talk to Nigeria's Ycee about his supremely well-crafted new EP, The First Wave.

Ycee’s The First Wave EP was slated for an April 7 release date.

Soon after he announced this in a video posted on his Instagram page, Kendrick Lamar dropped “The Heart Part 4,” on which he heavily suggested his third album would also drop on April 7.

“Condo,” “Jagaban” and “Omo Alhaji” came out in 2015, the last two were sure fire hits that earned Ycee, among other awards, the Revelation of the Year at the MTV Africa Music Awards of the same year. The surge in demand led him to put on hold a degree in marine biology at the University of Lagos.

These hit songs bled into 2016, overshadowing newer song releases, the most memorable of which are “Sumi” and “In the Benz,” produced by his brother who goes under the moniker Beats By Karma. All through this period, Ycee didn’t release an album or EP, which encouraged perceptions of him as a “singles artist.”

Signing to Sony last year dismissed this viewpoint and made the delay in releasing a full project look like one long-calculated gamble which was starting to pay off.

If it seemed like bad luck to release a project on the same day the hip-hop world is primed for a Lamar album, one reminder of when in 2003, J Cole moved his debut drop to the same day as Kanye West’s Yeezus should put doubts to rest.

Rather than diminish Cole’s Born Sinner, the audacity of it showed real ambition. This contributed to Born Sinner selling only 80,000 copies less than the 380,000 which Yeezus sold in the first week.

Lamar’s April 7 release date was the tease it was, while Ycee’s isn’t.

The First Wave is a sure-footed project. The first song “Wavy” is an exercise in brag-swag, but what really impresses is the “brag flow” and just how he has weaved the words and cadence around on a staccato beat.

You need not check the credits to know that Maleek Berry produced “Don’t Need Bae.” He also appears on the sun-dappled “Juice,” produced by Adey. Berry has been refining such beats for some time, the best of which is of course “Kontrol,” whose video was surely an inspiration for that of “Juice.”

The ever welcomed presence that is Falz turns on a fine performance on “Bubbly” about how the weak Naira has constrained turning up on expensive wine. Ycee’s malleable flow does hold up next to the Sheyi Shay’s singing voice and R Kelly-like impressions.

At eight songs totaling 30 minutes, The First Wave is a well crafted EP with lots of replay value. This interview, condensed and edited, was held in January on the London leg of Ycee's first UK tour of the year.

What were your highlights of last year?

Being nominated for MTV MAMA awards, the Sony deal I signed with my label Tinny Entertainment, the fan base increasing, the music doing very well and may other things that are under wraps.

If a “Carter” had anything to do with it, it would be Lil Wayne. He was the one I was listening to when I decided I was going to be a rapper and a professional musician. At a point I sounded like Lil Wayne and wanted to be like him. The “Carter” in my name stands for Crazy Advanced Rapper Terrorising Everybody.

How did your single “Link Up,” featuring Reekado Banks, come about?

I’d done the chorus and verses myself but I didn’t think I’d done much justice to it if it’s just me on it. Some of the artists I sent it t0 were taking to long to record their parts. I’d call and some will say let’s just do another song.

Then Reekado dropped his album Spotlight and I really liked it. I was listening to it when another person let me down so i just thought, “Reekado is actually pretty good at this." So I called him up and said "Bro, there is this song i want you to be on and i know you will kill it." I sent it and in two days he sent it back with the chorus written and recorded.

The women in the video turn into vampires. Don't you think this doubles their objectification?

No one has actually brought this up. Everyone else remembers the toilet scene.

I should also say that it is true that there are women after you and what you have, but still, characterising them as vampires may be a step too far.

I know. It’s a very sensitive topic but we were really just having fun.

In photos on your earliest songs on Soundcloud, before you grew your hair, the most you had by way of sartorial swag was an earring.

I didn't even have tattoos then.

Yes, and I've watched how your sartorial choices have evolved and I now think you're one of the most elegant dressers in the industry. Is there a story behind this decisions?

I went through a restructuring phase and during that I realised that as well as the music, you have to cover every angle. I was watching artists like ASAP Rocky, Tinie Tempah and Wizkid. Now I wear stuff and people would be like “are you sure?” If I feel comfortable in anything I'm wearing, I just feel like I look good, and I think that's why it works for me.

Here it is folks! the official ART FOR #THEFIRSTWAVE EP! Boys and Girls my eye don clear now 😄 Watch out for the track list, out very very soon! Thank you for your Patience 🙏🏽 #TFW #TheFirstWaveEP #TINNYENTERTAINMENT #festacbreed 🌊🌊🌊 cc @mob_design @tinnyentafrica

Another of your songs “In The Benz” is grime. It was good to hear you on a beat unlike any others you've recorded on. How did the song come about?

My brother BBK (Beats By Karma) produced it. I listen to a lot of UK sounds and I like the accents. Once I heard the beat I was like yes, I dig this.

(Laughs) Yeah, all them tings. Every time I go into the studio I like to do something different. If I do an afrobeats song today, next time I'll do something else so the sound doesn't get saturated. We'd done trap, rap and everything so I thought we have to do something for the U.K.

Initially I wondered how people back home in Nigeria would react to it, but then a lot of people there ride in a Benz so they'd understand it.

It isn't a conventional grime beat. There's what to my possibly thin ears sound like EDM. So what do you call it? Grime-EDM, EDM-Grime?

Your flow can be very melodic. Do you go into a booth and hum melodies first before fitting them with words, or do the words come first?

One thing I thrive on is the fact that my flow is really, really, really dope. Most times I don't even write, I like to get the flow down first by humming then I write according to the flow. When you write before you flow, it is not always fluent. Anybody can spit dope lines, it's about how you present these dope lines. For me, flow is very, very important.

Could you name MCs whose flow you dig? Jay Z is an easy one.

Who are the grime artists that you rate?

Afrobeats and grime have reached new levels of popularity, concurrently it seems. Do you see the genre becoming as big as hip-hop or rock, maybe?

It could get really big.

I searched online for your first ever mixtape, Serial Killer, but couldn't find it.

There was no Soundcloud at the time I made it, but it is still on hog share. All I knew about music at the time was that all you had to do was record and send the songs out and everything will take care of itself. I remember emailing it to many different blogs and waiting for a reply which never came.

What year was this?

I don't imagine a secondary school leaver to have the cash to pay for studio sessions to record a mixtape. How did you fund it?

None of Serial Killer was recorded in a studio. We did it at home using Virtual DJ. I would go to Internet cafes and download beats.

At home me and my brother would close the door, close the window and record. There were times when my mum would walk into the room and go “you guys have started again,” that kind of thing.

How do you feel when you listen to it today?

I listened to it last year. Some songs made me think “was I really spitting like this back then” and on others I would think “what was I even saying?” I'm proud of it.

Everyone has by now asked you about “Omo Alhaji” so I won't bang on it but I'm curious to hear what you make of the versions by Sess The Producer whose beat instrumental mixtape we premiered as an OkayAfrica exclusive?

The First Wave has been in the making for some time now. Has the sound or feel also changed?

I've been traveling a lot and working with different producers and the EP is supposed to be a collection of sounds.

Do you still believe you're the remix killer? I won't mention 50 Cent.

I was recording a lot of remixes for like a year. It sounded really hot and people would be like “you killed that remix” and it just stuck. People now complain that I do too many covers forgetting that's how I started. I could be in a club and a song will be playing and I'm already mouthing a different version.

Do you have a set team of producers or do you work with many different ones?

There's my brother BBK, there's D Will who produced “Jagaban,” there's Adey who produced most of the EP, and E Kelly. E Kelly and I, we have this strange bond. We may not work together for six months but every time we get in the studio it's always dope stuff.

The debate about Nigerians stealing Ghanaian musical styles reared its ugly head recently. And you're one of the few in this era who jumped on what you'd call a 'Ghanaian sound' with "Omo Alhaji." Do you have a take on the debate?

I remember being in South Africa and working with DJ Maphorisa. I played him a couple of songs and what he picked out was the (Ycee beats on the table the same distinctly Ghanaian arrangement from "Omo Alhaji") which Maphorisa called “the West African” sound. Ghanaians made it popular with the al qaeda dance. I think it's a situation where I know my shirt is white, don't come and tell me my shirt is white.

Correction April, 11 2017: A previous version of this article mistakenly stated that Maleek Berry produced "Juice." Adey produced the song, which Berry features on.