'No One Can Take Your Story,' Yinka Ilori On Telling Narratives Through Furniture Design 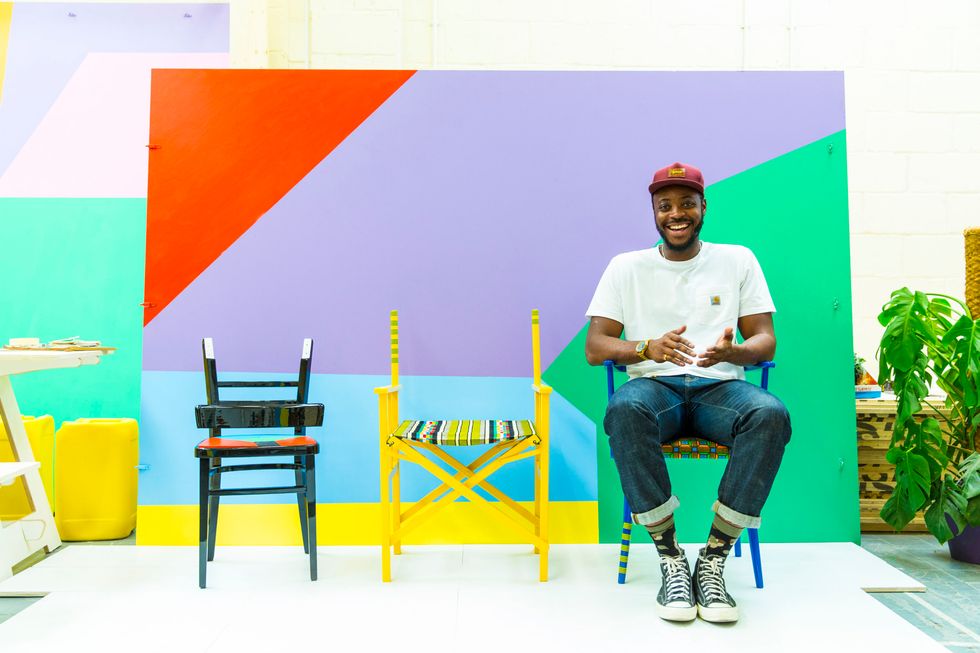 The British-Nigerian designer behind the 'Parable Chair Collection' and 'If Chairs Could Talk' tells us why storytelling is central to creativity.

"If you compare the British culture and Nigerian culture, it is totally different. I remember some of my friends would tell their parents to "shut up," quips Yinka Ilori, the craftsman behind ‘If Chairs Could Talk’ and ‘Parable Chair Collection,’ two one-of-a-kind furniture collections that capture the essence of his British-Nigerian upbringing.

These types of anecdotes and childhood experiences are interwoven into each chair, drawer or side table he creates. For Ilori, designing is a form of expression that goes beyond producing aesthetically pleasing objects—though he does that without question—to become an avenue for storytelling and cultural preservation.

With the ‘Parable Chair Collection'—which showcased at this year's Design Indaba conference in Cape Town—the London-based designer manifested the many proverbs, which his mother and father—in true Nigerian parent fashion—drilled into him growing up, into artfully hewn cultural mementos.

For Ilori, his desire to share his story is precisely what makes him a designer. We spoke with the artist about how he's managed to propel his work by channeling his passion for storytelling, and why other prospective designers should do the same.

He addresses designers specifically, but his words will likely resonate with anyone on the creative grind. Read our conversation below.

"If Chairs Could Talk." Photo courtesy of Yinka Ilori.

How did you get your start in furniture design?

I had my first degree exhibition in my third year and then I designed this wardrobe called "Walk In Wardrobe," which was inspired by retail design and how people shop and when people want to go buy clothes and they're expensive. Because to me, I love expensive clothes, which I couldn't afford. So I produced a wardrobe for my major project in university.

It got quite a lot of interest from big retail brands. People who saw my work at this exhibition were quite interested—that was my first taste of design, commercially. I finished my degree and then I went on to work with Lee Broom. I did an internship, working in the studio with him. Lee Broom is a designer based in London, but now has a shop in New York, he's known for lighting and furniture design.

I enjoyed the internship, but I just felt like it didn't tell my story. We were creating work for a restaurant, but there was nothing in there for me. My dad always used to say, "vanity upon vanity is vanity." You put in what you get out. So, I wanted to step away from design and find out what I actually wanted to do.

My first introduction to the design work on my own was in 2011 or 2012, when I did my first exhibition with the African and African-Caribbean Design Diaspora. They celebrate and showcase black creators and black designers from fashion, to photography, to fine art, to graphic design. Pretty much everything in design, they support and celebrate. So I produced my first collection in south London, called Bargehouse. And that was when people saw my work, and how I used my heritage of being British and also being Nigerian. That show gave me my first taste and introduction to design.

Why is storytelling so important to you as a designer?

For me, it’s because my parents have always been a big influence in my work. And also just listening to their story and narrative and their journey of being in Nigeria, and living there for such a long time, having the guts to leave Nigeria and come to London to give us a better opportunity and a better life. They had great jobs in Nigeria but they just wanted something different for myself and my siblings. Just hearing about their upbringing and how hard it was leaving your mom, your dad, your cousins—honestly, I don't feel that I could ever do that. Leaving your loved ones behind for some place you've never been could be a disaster.

It was a huge risk. That, for me, was inspirational. I will always respect them because that was a tough thing to do. Then, it was hard, but it may be even harder now. My parents always tell us about our culture, about us being Nigerian and what it means to be a Nigerian and how they wanted us to embrace ourselves. At home they spoke Yoruba, it was never really English. Even in public, it was always Yoruba. They always wanted us to respect people who are older than us. For me, those are narratives in themselves.

So that's why my story is really important to me because there's a lot of people who come from similar backgrounds as me and have similar stories, who have parents who are immigrants from Africa who came to London for a better life. So, in some way or form they can understand my struggle and understand where I'm coming from. For us, our parents are so cultural, and so passionate, and really strict. But then you have this other heritage, where you’re British. If you compare the British culture and Nigerian culture, it is totally different. I remember some of my friends would tell their parents to "shut up."

I wanted to retell some of those narratives and stories and share that with people who can relate.

How do you remain inspired. Do you ever experience designer's block, so to speak? And if so, how do you combat that? How do you stay creative?

I'm trying to prepare for my exhibition in September. I've just got this idea of doing something quite massive and something that involves every race in the community and where everyone can feel like they belong to an experience. A sense of belonging is really important in my community. Growing up, there would be a party every other weekend. That made them miss home. Having parties and going to church was a way of keeping in touch with their culture. Today, I was doing this project and  I had this mental block, and I was like, what do I do? I mean, how can I move forward from this? I was just brain dead.

For me, music has always been a catalyst for me and form inspiration. So, listening to some musicians like King Sunny Ade or Orlando Julius, those iconic, prolific musicians who sing. But if we look deeply into what they're talking about, they're speaking in riddles and parables. Some people will say they can't work with music, but I need music to fuel my energy. It's like you need food to survive. I need to music to keep me going. Music has always been my go-to when I'm feeling a mental block.

What do you think are the most important skills for a designer to have?

That's quite a question. I look at my degree and I kind of feel that I didn't really need it.

I could've done a short course. With design, you can go to a fancy school and learn how to make furniture. But, I would probably say for anyone who wants to be in design, having good people skills and patience are important. When I look at my journey, I'm not successful, I'm not the world's best designer, but I think when I look at my journey, and look at how far I've come over the years—and it's only been the last two or three years where a lot's happened for me. A lot of opportunities have come my way. So it hasn't been an overnight success, it's been lots of late nights and hard work for me, and then it takes one article or an exhibition and then everyone jumps on your work.

So I think having patience is a skill. Not everyone has patience. Be patient and just be nice to people. I think that's a skill for anyone. Is that a skill? I think it is. I had to learn that skill and it wasn't easy.

Design Indaba is the premier conference for African designers, it's a pretty huge deal. What was it like speaking at this year's event?

I'm actually quite a shy person. When I had the invitation to go and talk at Design Indaba, I was honored and really excited. If we look at past speakers, it's quite an honor to be on that huge stage speaking to thousands and thousands of people.

So for me, it was one of the best things that I've ever done. I met so many inspirational and  powerful people. Not just in terms of designers, but as individuals. There were a lot of people there who I've I looked up to, like Olafur Eliasson, he's a renowned artist. His work is amazing, so to have the opportunity to listen to him speak, and hang around him was great. I know a lot of people might not like to say "this person inspired me" or "this project was inspired by this," but for me, if someone is inspiring and I respect their work, I'm always gonna say that.

My presentation was quite interactive. It was based on my journey and past and existing projects that I did over the years. As my introduction, I wanted to create something that was quite massive, which also involved the audience. Again, Nigerians and my parents, always have parties at home every other weekend. It was always someone's birthday in my house. Always. But we wanted a party for no reason. But we just loved having people over and cooking that one food and drinking—that was their thing. That was how they relaxed, when they saw family and friends. We lives in a council estate in north London, where it was about 60 people living in this massive block of flats.

So, what was nice was, we had people who were from different backgrounds. My neighbor was Ghanaian and my neighbor on the left, was from Turkey. We had people there from Somalia. It was diverse, which was amazing. I learned about a lot of different cultures at such a young age. We had these parties where the whole estate would come to our party. Even if they couldn't fit into our house, they would be downstairs or on the balcony. I wanted to recreate that experience, so we had a house party on stage.

We had a DJ Blinky Bill from Nairobi. We had people in the audience come down to my house, on the stage. It was like my home. We had a party on stage for like three minutes. I loved [Design Indaba]. It was great. We all stayed out there for a week. It was a really great trip.

Do you have any general advice for designers coming up in the diaspora? Anything you'd like to leave with them?

When I was coming up, I was always worried about telling my story, and worried about what people might think. I thought maybe it wasn't British enough, I don't know, but what I would say to anyone starting out, is to tell their story their own way. Because no one can take your story. I know it's like a boring thing, but that's just the truth. You have to tell your own narrative your own way, because you've seen things. You know the feeling. I think that's the beauty. So I think re-telling those narratives in an interesting way, that will set you apart from any other designer.