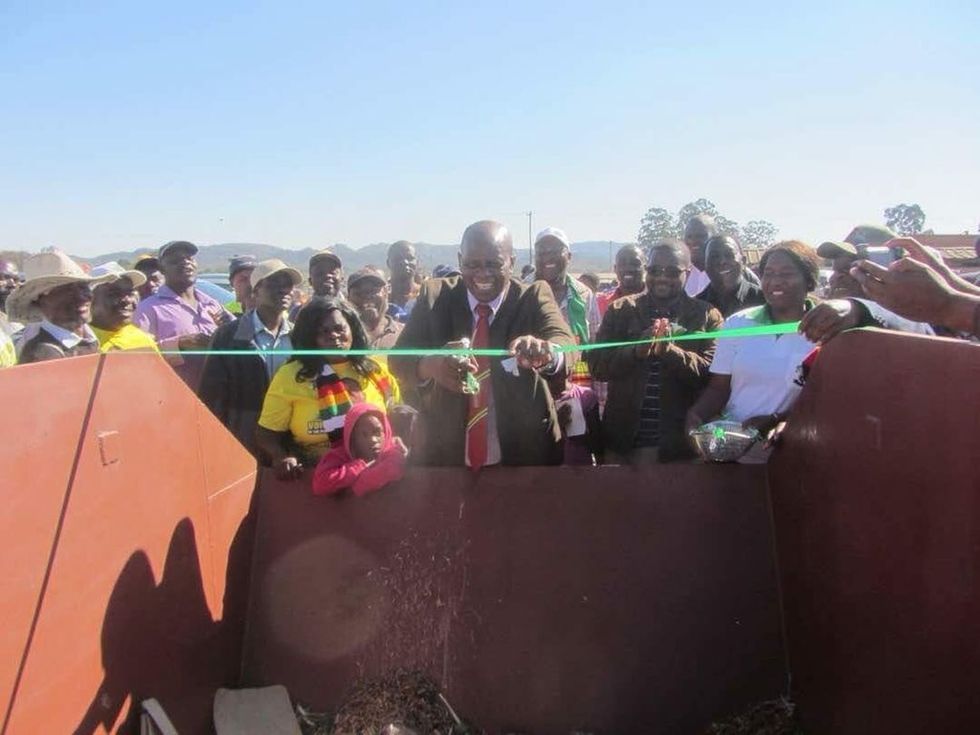 It's almost election time in Zimbabwe and politics are getting a little trashy.

Zim twitter exploded today after photos of the Minister of Finance Patrick Chinamasa at a bin opening ceremony in the Northeastern town of Rusape went viral. In the photos, Chinamasa is wearing a brown suit with a falling flower lapel, and he is smiling widely while cutting a bright green ribbon stretched over a large bin. The gesture is so underwhelming, it is a spectacle.

While the weeks leading up to any elections are always filled with photos of politicians at hospitals, schools, railway stations, or rallies, this bin opening ceremony did not fit the usual performance of public service. Minister Chinamasa claimed that the ceremony was part of the move to "help improve waste disposal and management in Rusape," but the public discussion following the ceremony has been less about clean towns and more about empty gestures made by politicians.

Since laughter is often the best response to politics, most people have responded to the photos with puns and jokes. "'Waste' a Minute: Zim Finance Minister Cuts Ribbon at Bin-Opening Ceremony," read the Eye witness news headline."They Dnt deserve 2b on our ballots but our bins" twitter user @chirikubi 22 posted. The minister was also given new nicknames as many tweets referred to him as "Mr bin" or "Minister Litter."

Those who didn't bother to join in the word play tweeted the photos with simple captions like "Minister of finance opens a rubbish bin." The fact seemed ridiculous enough.

While most responses took a humorous approach, many people highlighted how the ceremony was "disrespectful" as a reflection of how politicians do not take citizens seriously. Evan Mawaire from the #Thisflag movement tweeted, "How many SUV's drove out for this? How many top level civil servants were unavailable from work, how much man hours is that? Who was attending the cash & economic crisis whilst he was bin opening?"

Let me try to spin this to save my sanity: That "bin" is actually a UFO that landed KwaRusape and that was releas… https://t.co/dtyleYgkJG
— James Chikonamombe (@James Chikonamombe) 1529421272.0

This July election has been highly anticipated as it's the first election without the usual candidate former president Robert Mugabe on the ballot. However, the bin ceremony was a disappointing gesture from the "revamped" Zanu-Pf party that left humorous tweets as the most appropriate responses.