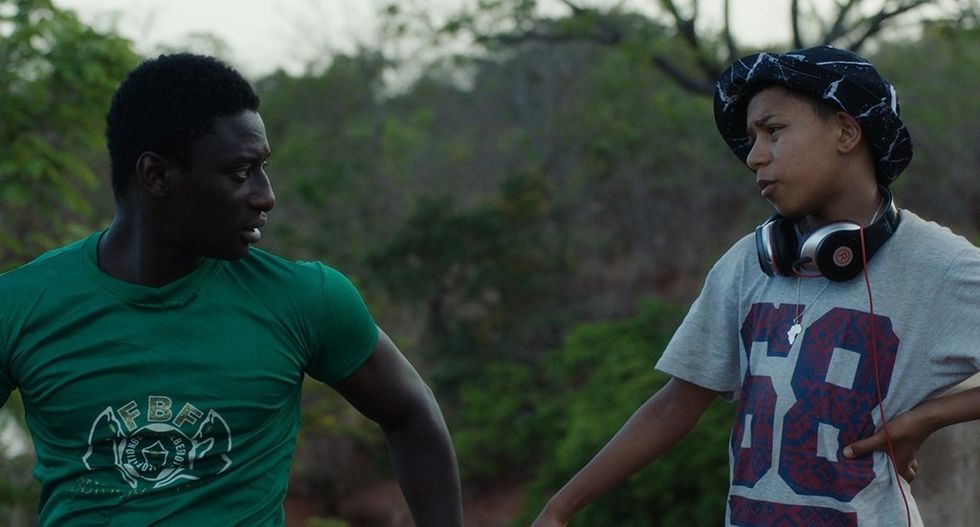 This lineup is so solid.

The 26th annual Pan African Film and Arts Festival is just around the corner, and as always the event will be a cradle for the best and brightest in black art and cinema.

With close to 180 films on the lineup, from around 44 different countries, this year's festival is set to deliver a diverse collection of films relating to Africa and the diaspora.

We wish we could watch every film, but seeing as how time is limited, we've had to narrow down some of the ones that we're most anticipating.

Below we give you 15 films that we'll be checking for at this year's Pan African Film and Arts Festival. View our selection below as well as synopses directly from the Pan African Film Festival below, including On Monday of Last Week—based on Chimamanda Adiche's short story by the same name—Oscar nominated short Watu Wote, and the closing night's feature The Forgiven, starring Forrest Whitaker as Archbishop Desmond Tutu.

OkayAfrica will be on the ground in Los Angeles to catch all the action during this year's festival, so be sure to keep up with us on Facebook, Twitter and Instagram for more coverage of the event.

Max is a 34-year-old author who wrote a South African bestseller in his 20s. Though his star is now on the wane, he teaches a popular creative writing class at the local university. He lives in a Johannesburg suburb with his beautiful and successful reporter wife, Sam. They seem to have everything…a beautiful home, successful careers and love for one another. But their world is turned upside down when a successful and flamboyant writer, Heiner Miller, comes to do a residency at the university and moves in with the couple to recuperate from a mild heart attack brought on by drug and alcohol-induced late night parties. Tensions rise as Heiner continues his ways under Max and Sam's roof, as Max begins to suspect a budding relationship between Sam and Heiner.

Julián enters the Najayo men's prison having been busted for a robbery. There he discovers its inmates have invented an intimate love sign-language, "woodpecking," to communicate with the prisoners in the women's facility, more than 100 yards away, whom they can just about see but hardly talk to. He starts "woodpecking" for Bacano, a pathologically macho convict, with Yanelly, who's serving time in Najayo's women's facility. But Julián and Yanelly fall in love, and that's when Julián's real problem begin.

The most pronounced African Culture of the Diasporas remains the culture of the Yoruba. From Brazil to Trinidad, United States to Cuba, Haiti and the entire Caribbean, this West African culture dominates all other Cultures of Africa and could be said to have survived the plantations for hundreds of years. Bigger Than Africa follows the trans-Atlantic slave trade route from West Africa to six different countries-- USA, Nigeria, Brazil, Republic of Benin, Trinidad & Tobago and Cuba-- to explore and find reasons for the survival of this particular group of Africans. When the slave boats docked in the Americas, Cuba and the Caribbean, hundreds of cultures and religions came with the Africans but only one survived the plantations.

A worldwide trade war has broken out over the control and distribution of the new healthy Super Food, tiger nuts, which will soon be a part of all healthy diets. An investigation uncovers a plot of international corruption and abuses around the production of tiger nuts by European and American companies exploiting African resources. After an entire year of planting, managing and harvesting tiger nuts pursuant to agreements made with European and American buyers within the World Trade Organization rules and regulations, West African farmers are robbed of their crop and profits by the manipulations of European and American companies that utilize European customs laws to defraud. This film shows African farmers and their governments resisting this attempt to control their resources. An important film to see and spread the word.

A true story of a 19-year-old street vendor, who after he is brutally beaten by police, goes into exile to join the South African liberation movement in their fight against apartheid following the 1976 Soweto uprisings. Through the turn of events he became a hero of the movement and an international icon of the struggle against apartheid. Cast members Thabo Rametsi and Pearl Thusi will be present for the Q&A.

Haiti Is A Nation of Artists

Haiti is a Nation of Artists depicts Haitian artists creating transformational work after the devastating earthquake in 2010. It aims to introduce positive images of Haiti and its people. It seeks to reframe the narrative and perspective of a country that is largely seen as naïve and primitive; instead elevating its people's creativity, strength and positive spirit even in the midst of seemingly insurmountable obstacles. The documentary depicts the humanity of Haitian culture through the lens of a Haitian-American filmmaker who seeks to uplift the rich diversity of Haiti and its historical legacy.

Yemi's Dilemma is the story of three sisters, a wedding and a family torn apart. Yemi, Lola and Tayo are first-generation Nigerian-Americans in a tight-knit family. Although they've been raised in America, their parents have a strong desire to maintain the traditions of their home country. Yemi, the eldest, is expected to marry a Nigerian man, but she's keeping a huge secret from her parents that will forever change the dynamic within the family for better and for worse.

Steeped in visual and musical lyricism, this unusually structured film follows Félicité, a fiercely independent club singer and single mother who lives her life in the chaotically vibrant Congolese capital of Kinshasa with a proud defiance — she doesn't need marriage, a man, or even love to get by. But when her teenage son is in a horrific traffic accident, she must find a way to pay for his operation, forcing this resolutely solo woman to find help before it's too late. Her quest sends her on a fast-paced journey through the streets of Kinshasa and eventually leads her to trust Tabu, a man known more for his indulgences than his intimacies.

On a continent where dreams are often displaced by necessity and survival, the game of basketball brings hope to many young men raised on the soils of Africa. Giants of Africa follows Masai Ujiri, president of the Toronto Raptors, on a journey of philanthropy and inspiration. At the age of 18, Ujiri left his home of Zaria, Nigeria, to play college ball in the United States. He then moved on to coaching and scouting, eventually working his way to become the first African-born president of a Major League North American sports organization (of which he remains the only one). In 2003, he began running basketball camps in Nigeria, and the operation has since expanded to Ghana, Kenya, and Rwanda. Giants of Africa accompanies Ujiri to these countries, showing how he empowers the next generation to become the giants they have the potential to be — on and off the court. To attend the GOA camps, young men from across the continent overcome staggering odds, with an unwavering spirit. Though most of these youth want to become African NBA stars like Hakeem Olajuwon or Dikembe Mutombo, Giants of Africa is about more than merely "making it." As Ujiri demands of the kids in the camps, "You have to grow up and you have to be better." Make their countries better. Their continent better. Through their tireless efforts, Ujiri and his team of coaches inspire young Africans to aim, always, ever higher. Masai Ujiri will be present.

A coming-of-age story about a French-Burkinabe teenager living in France with his father. Due to his unruly and arrogant behavior, his father decides to send him to a small village in Burkina Faso to live with his uncle in the hope that the drastic change in environment will increase his African consciousness and spirit and help him grow up.

The Train of Salt and Sugar

During the Mozambican civil war in the 1980s, a train under military guard, led by a mystic Sangoma military Commander, must transport its passengers and goods 500 miles through apartheid South African-backed guerrilla-held territory. As rivalries form between the soldiers and friendships between the passengers, violence looms both on board and from the rapacious rebels. With the threat of battle pending, romance blossoms against the stunning backdrop of the African countryside.

For almost a decade Kenya has been targeted by terrorist attacks of the Al-Shabaab. An atmosphere of anxiety and mistrust between Muslims and Christians is growing. Until in December 2015, Muslim bus passengers showed that solidarity can prevail. Nominated for Best Live Action Short Film Academy Award.
Country: Kenya

On Monday of Last Week

Kamara, a Nigerian woman, is working as a nanny caring for Josh, the five-year-old son of Tracy and Neil, an interracial couple. Tracy is an African American artist working on a commission in her basement studio - a space she rarely leaves. The absence of Josh's mother Tracy intrigues Kamara. When Tracy finally emerges from her studio one afternoon, Kamara's growing curiosity is piqued. Their brief encounter inspires Kamara to become Tracy's muse.
Country: Ghana/US
Directed by: Akosua Adoma Owusu

I wondered what had happened to this flick, previously titled “The Archbishop and The Antichrist” in which… https://t.co/eqHxIsvaw9
— Tambay Obenson (@Tambay Obenson) 1515708894.0

It is 1996 and South Africa's Truth and Reconciliation Commission (TRC), which aims to offer support and reparations to the victims of apartheid, has been running for two years. It is headed by Archbishop Tutu, who works to resolve crimes in order to heal an embittered nation. After promising the grief-stricken family of one victim of a government-sanctioned 'disappearance' that he will uncover the truth, Tutu's search leads him to Piet Blomfeld, a convicted murderer languishing in Cape Town's Pollsmoor Prison. Roland Joffé's gritty and suspenseful drama recreates Tutu's confrontation with Blomfeld, who seeks redemption for his crimes. What emerges is an intelligent and deeply affecting exploration of the psychological and moral questions raised by the TRC and our capacity to let go of the past. A political drama that asks how far we can go in forgiving past crimes. Stars Forest Whitaker and Eric Bana.