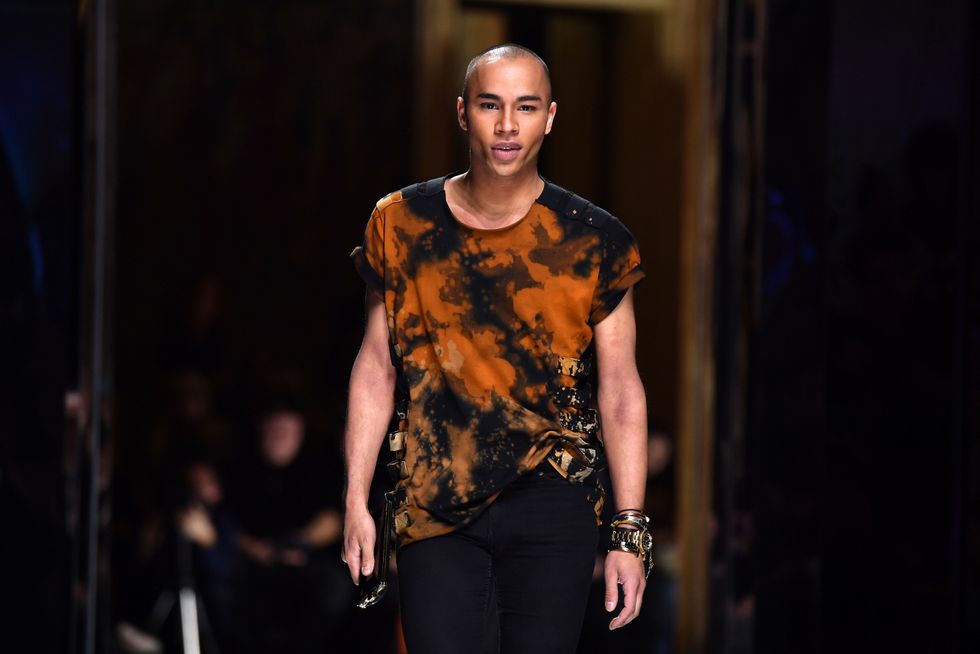 The African origins of Olivier Rousteing, creative head of Balmain, are revealed in a new film and article.

The last few days have been a very public emotional rollercoaster for Olivier Rousteing, 34, the visionary creative mind behind French high fashion brand, Balmain. The New York Times published an article earlier this week unveiling the content of the forthcoming documentary about his life, Wonder Boy.

The film is directed and produced by Anissa Bonnefont–a woman Rousteing met while purchasing his stately Parisian apartment from her mother. Bonnefont's initial reaction to Rousteing is what sets the tone for the subject matter of the film. As she tells the New York Times:

"I just thought it was so unusual for this mixed race guy to succeed like this...to hear his story would be very necessary for our country because of all the issues around immigration. People need to see the reality of how you can achieve a dream and come from nothing. That's the American story, but it's not the French story. In France where you come from, what family, what school—that is who you are."

As the article unfolds, it is clear that the idea of identity, blackness and being mixed-race in today's social and political climate are at the heart of Wonder Boy–not the glitz and glamour of the fashion world. It is a peculiar story given that Rousteing is a light-skinned French man who was adopted as a baby and skyrocketed to the upper echelon of the fashion world, becoming creative director at Balmain at just 25.

As the face and image of an iconic brand, Rousteing felt that it was about time he actually understood himself. Given his adoption, he never knew his birth parents. In the documentary, he finds out the truth of his origins and that–despite his complexion and hair–he is not of mixed race.

"She was Somalian and he was Ethiopian, which means I am African-African," Mr. Rousteing said. "I'm black." It's discombobulating discovering, in your 30s, that the myths you told yourself your entire life, even if you knew you had made them up, were all wrong."

The film, though it is about a high profile man, seems to unpack aspects of modern living and racial diversity that are at the core of many people's lives. It also speaks to an often misunderstood concept of blackness and that lighter complexions always denote mixed race. The issues of origin and color are particularly nuanced in France–due to its colonial past and citizenship laws–as was on the world stage during their 2018 World Cup victory.

In response to the film, Rousteing had a positive outlook on the revelation and on himself. Though the article is prompting some passionate responses on Twitter, he says this:

"After the movie, I started to like myself more," he said. "Instead of feeling like we had to fight for everything, instead of having a Balmain Army — us against the world — I want to bring people in. I want everyone to understand you can have the dream, without perfection. Inclusivity is speaking to not only the fashion elite."

The film is scheduled to play on French channel Canal Plus for one night on October 16 and open in theaters in November. It is not yet certain if it will show internationally.