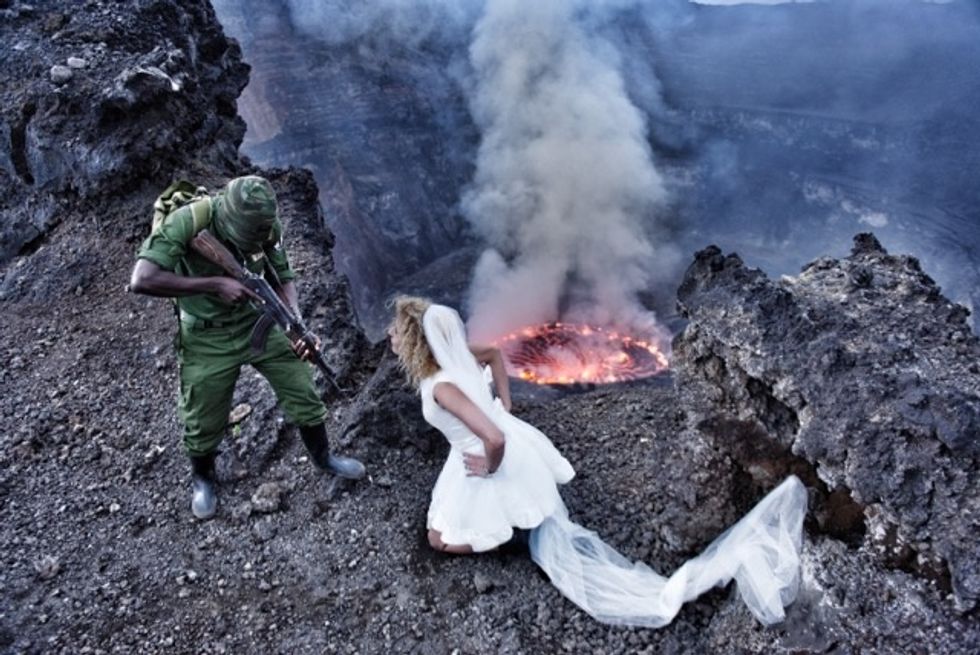 See the rest of the photos at Steve Huff Photo

A white woman in a wedding dress on top of a volcano wearing blood diamonds. These people actually did this.

A white couple goes to Congo and stages a wedding shoot on a volcano complete with locals staged as gross caricatures of militiamen and "tribespeople" holding them at gunpoint with captions about blood diamonds, "the ghetto," and bragging about being in an active war zone.

What can you say about these photos that isn't blindingly obvious from just looking at them? The sheer level of effort they put into executing this "Heart of Darkness" fantasy is breathtaking—a security team, a drone, actors! This couple must be the least self-aware people to have ever traveled. They're like two Louise Lintons.

As social media warps our brains, pushing us deeper into the pit of performative bullshit for the 'gram we are suddenly all spectators to the aesthetic depths of the racist mind. From the explicit MAGA fan-art to this kind of neo-colonial Snap Chat fantasia, it's grotesque and seemingly inescapable.

Posted yesterday on Facebook by Cecilia Christin, the 2017 photos have now been shared thousands of times and inspired a torrent of social media commentary. While the photographer's original Instagram has now been taken down you can see the photos as part of the post "Outside of the Box Congo Wedding Shoot with the Leica M10 by John R. Milton" The fact that they were taken with a ludicrous $8000 camera just bumps the absurdity ever higher.

"I decided to share these pictures in order to foster discussion within my friends and following, specifically about the accessorization of black bodies for this couple's photo shoot," Christin said. Specifically, she took issue with how the couple uses "black and brown people, and their experiences, as props to gain a following" on Instagram.

No word from the photographers, yet.

People on Twitter first weren't sure it's real. Well, like most things in 2018, it's real and it's bad.

This might be the single worst thing white people have done since the last terrible thing they did which was probab… https://t.co/Em21prONJl
— Congolesa Rice (@Congolesa Rice) 1540320315.0