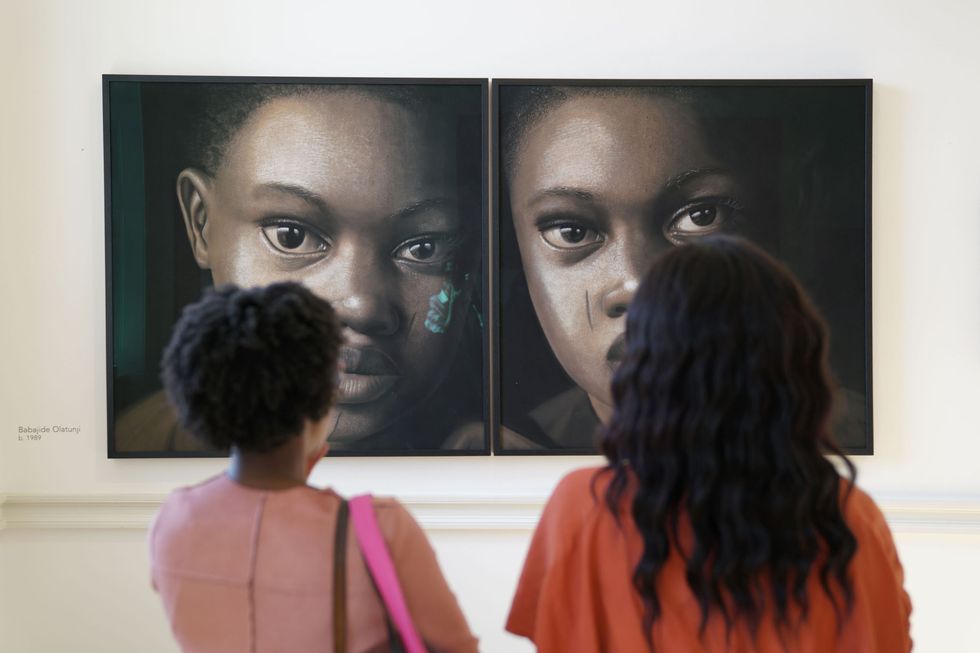 Fairs like 1:54 challenge society to pursue a wider definition of “Africa” that embraces and frees the continent from its historical baggage.

The new international scramble for Africa via the rise of contemporary African art and its global appeal begs to ask the question: what exactly is African art?

Given the effects of globalization, the line between local and international has become increasingly arbitrary. British-Nigerian Turner Prize-winning painter Chris Ofili, for example, grew up in Manchester and now lives in Trinidad; Gabonese artist Owanto has spent the majority of her career living and working in Europe. While both artists are certainly African, their work, which incorporates a variety of media, often does not directly address the continent. It often seems that the artist’s identity is enough to be categorized as African art, rather than the substance of a piece.

When the Metropolitan Museum of Art in New York first acquired the art of El Anatsui, the celebrated Ghanaian artist, curators first placed his work in the African gallery. Only later did they add his pieces in the Modern and Contemporary Galleries. For Anatsui, it “raise[d] so many questions as to what precisely [he is]…African artist or an artist? An artist in India is the same as an artist in Africa, Ghana, Japan or America."

With sales directed at a public largely unacquainted with Africa’s vast diversity, some curators are adding nuance to the idea of “African art” by casting the new wave of talent as a coterie of artists of African descent exploring universal themes through locally-rooted perspectives. Indeed, the use of '1:54' itself in the name 1:54 Contemporary Art Fair is an attempt to draw attention to the 54 countries and hundreds of cultures that make up the African continent.

Zak Ové's “Black and Blue: The Invisible Man and the Masque of Blackness.” Photo courtesy of 1:54 ©Victor Raison.

An expanding network of galleries across the continent helps contribute to that diversification. Over 14 Africa-based galleries from the continent’s five regions exhibited at 1:54’s London 2016 edition—a number that stands to grow in the near future.

For all the shortcomings of the term “African art,” it does serve a purpose in driving sales. In light of limited domestic markets and the fact that 80 percent of African art primarily sells in the United States and Europe, grouping together African artists is key to elevating their international profile. In this light, it is somewhat fitting that this year’s 1:54 London featured a discussion on locating “African design” and its constituents. The art of the continent’s leading talents sells at a relative discount compared to their peers from regions like East Asia. At 1:54, for example, pieces generally range from $1,500 to $100,000 (with a few notable exceptions from venerable stars like Sudan’s El-Salahi). Increasingly, the visibility of these artists on an international stage as “African” can help their investment appeal among collectors.

The wide umbrella of “African”—which often includes the diasporic perspectives of the Afro-Latin, Afro-Caribbean, and Afro-American perspectives—also allows for an opportunity to explore commonalities of the black experience on a global platform. Increasingly, African-American artists like Kehinde Wiley and museums like Brooklyn’s MoCADA Museum have been catalysts for transatlantic conversations on black aesthetics. 1:54’s inclusion of an installation by British-Trinidadian artist Zak Ové and photographers by African-American photographer Gordon Parks speak to the inclusivity of the current African art market, and a willingness to expand its vocabulary beyond references to tradition and neo-colonialism.

Although some may criticize the explosion of Africa-centric art events, they may be seen as a statement of possibility rather than a reflection of constraints. With a rapidly expanding creative class across the continent, Africa is increasingly becoming a locus of discursive gaze and thought. Artists like Ghana’s Serge Attukwei Clottey are pushing the limits of the gender binary, while Algeria’s Zoulikha Bouabdellah probes religious lines. In showcasing an array of African artists working across styles and mediums, fairs like 1:54 challenge society to pursue a more wide-ranging definition of “Africa” that embraces and frees the continent from its historical baggage by claiming all these artistic representations without being beholden to just one.