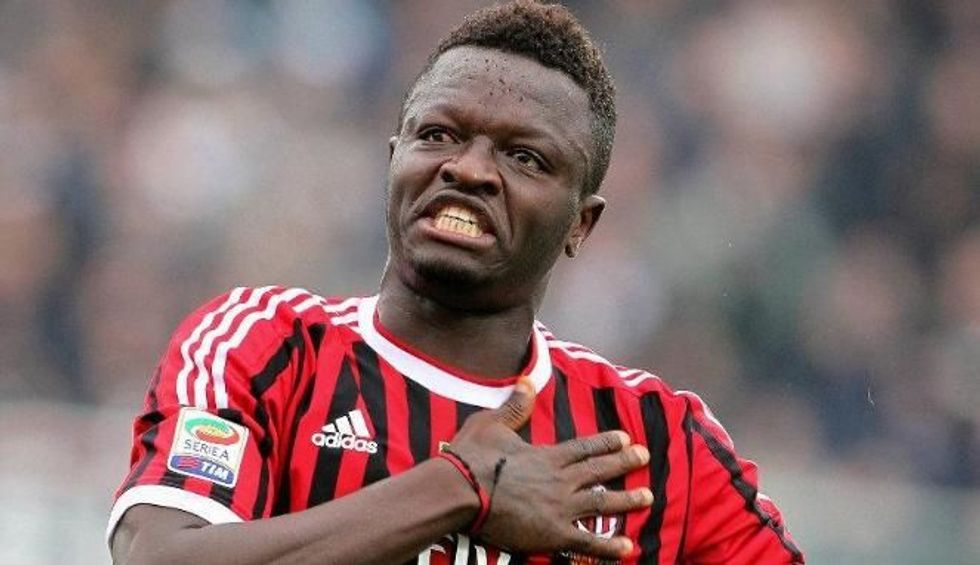 From Sulley Mutari to Samuel Eto'o, here's 6 times soccer players took a strong stance against racism on the field.a

Racism continues to be a major problem in soccer across the globe.

Insults, or worse, continue to be hurled at African, black and minority soccer players in elite leagues in Europe, South America, and the rest of the world.

According to a BBC report, out "of nearly 14,000 players in 54 countries, 17.2% of players based abroad have experienced discrimination, with the figure rising to 32% in Italy."

The figures only make FIFA's slow reaction to players' abuse and the disbandment of their anti-racism taskforce, declaring that the job was done, all the more shameful.

It's clear that black professionals playing away from home, typically in Europe's top leagues are, overwhelmingly, the main victims of racism in stadiums.

But these players are also the ones taking matters into their own hands to take a strong stance against racism. They're also becoming the main forces prompting the leagues and FIFA to answer this festering problem.

Below are some examples of soccer players rising above the hate and standing up to racism.

Sulley Muntari to racist fans: "This is my color"

The most recent example comes from Ghana's Sulley Muntari, who plays as a midfielder for the Italian club Pescara. Muntari recently suffered 'monkey' chants from opposition fans during his team's entire game against Calgari.

The player reported the abuse to the referee asking him to stop the game but, instead, was given a disciplinary card for dissent. This prompted Muntari to walk off the pitch and leave the field of play in protest.

"I went through hell, I was treated just like a criminal," the player told the BBC. "I went off the field because I felt it wasn't right for me to be on the field while I have been racially abused."

On his way out, he angrily stood up to the Cagliari fans who'd been abusing him, stating: "This is my color."

Muntari's since had his disciplinary booking overturned and says he'd walk off again if he was racially abused.

Kevin-Prince Boateng leads his team off the field

German-born Ghanaian Kevin-Prince Boateng, a former star of Italy's AC Milan, walked off a pre-season match against the club Pro Patria amidst a barrage of racial abuse.

In the middle of play, Boateng picked up the ball and kicked it at a section of racist fans. He then took off his shirt and walked off.

What happened next was amazing: the rest of the (presumably non-racist) Pro Patria crowd at the stadium applauded Boateng's actions and his AC Milan teammates followed him off the pitch.

Former Barcelona star Dani Alves was getting ready to take a corner kick against Spanish club Sevilla when he had a banana thrown at him.

Alves reacted quickly, taking a bite of the fruit and later joking that he was thankful for the extra potassium on his Instagram. He used with the Portuguese hashtag #somosmaisqueisso, or #wearemorethanthis.

His reaction sparked a social media craze of many of his fellow soccer stars—including Neymar, Sergio Aguero, Oscar and many more—posting a picture of themselves eating bananas in the face of racism.

According to NPR, the man who threw the banana was banned for life from Villarreal's stadium and the Villarreal team was fined 12,000 Euros by the Spanish soccer federation.

Another one from a Barcelona star. This time, Cameroonian superstar Samuel Eto'o responded to racist chants from rival fans of Real Zaragoza by storming off the field and, temporarily stopping the game.

"No más," Spanish for "no more," could be read on the striker's lips as he walked off. His Barcelona teammates, however, eventually convinced him to play on.

What a statement it would've been if the entire Barcelona team—one of the biggest and most successful clubs in the world—would've walked off with him.

Italian soccer star Mario Balotelli, the son of Ghanaian immigrants, has had to deal with racism throughout his entire career. Remember the "there are no black Italians" chants when he was first called up to Italy's national team?

Balotelli has since demonstrated, on and off the field, that he's black, Italian, proud, and won't stand for racism.

Recently, after playing in a French Ligue 1 game against the club Bastia, Balotelli sounded off on Instagram with a caption that read:

Ivorian player Marc Zoro left his mark on the game by being one of the first to stand up to racism in soccer.

Zoro attempted to stop a 2005 game between Messina, his club, and Inter Milan by leaving the field with the ball, after being abused with countless racist chants from opposing fans.

With his act, Zoro forced the Italian league and FIFA to wake up and acknowledge the problem of racism in stadiums.